The day started later than usual as bob had a bit of work to see too first!, on a Saturday too, what is the world coming too?. It did give me the opportunity to take the scenic route to his place and mop up a couple of local TMBF Photo tags, The White Horse in Leamington and The Royal Oak in Brandon. I arrived at Bob’s place just as he was getting his steed ready for the trip, more to the point sorting out his latest toy, the GoPro.

Chinney was also going to brave the slight chill in the air and his red Honda CBR1000XX was stood in amongst the selection of vans which adorn Bobs garage space.

Shobdon Airfield Cafe was today’s target and a bit of discussion took place as to the preferred route. The best way is Bromsgrove, Droitwich then the A443/A456 but this can be a pain due to the Saturday traffic but as we were in no particular rush this was the way to go.

After the usual refuelling stop at the Morrison’s Supermarket Garage in Redditch it was full steam ahead on the intended route. Chinney was having a slight problem with his electrics which meant that he had no rear lights, at the fuel break he disconnected his heated jacket which, after a further three or four miles, made a difference, at least he had a rear light now but still no brake light. A bit of caution was needed, I don’t think Chinney would have taken too kindly to a beast of a KTM 1190 shunting the rear of his Blackbird.

Bob relinquished the lead, Chinney took over and lead us to the Airfield without incident. The traffic was a bit on the heavy side but not too bad, the lure of bacon was calling. The parking arrangement at the café site was slightly different than usual, this turned out to be due to the recent crap weather rendering the grass areas waterlogged. We had arrived after the men from Wales and parked up with the Kawasaki’s and Bonzo’s 1200 Bandit. 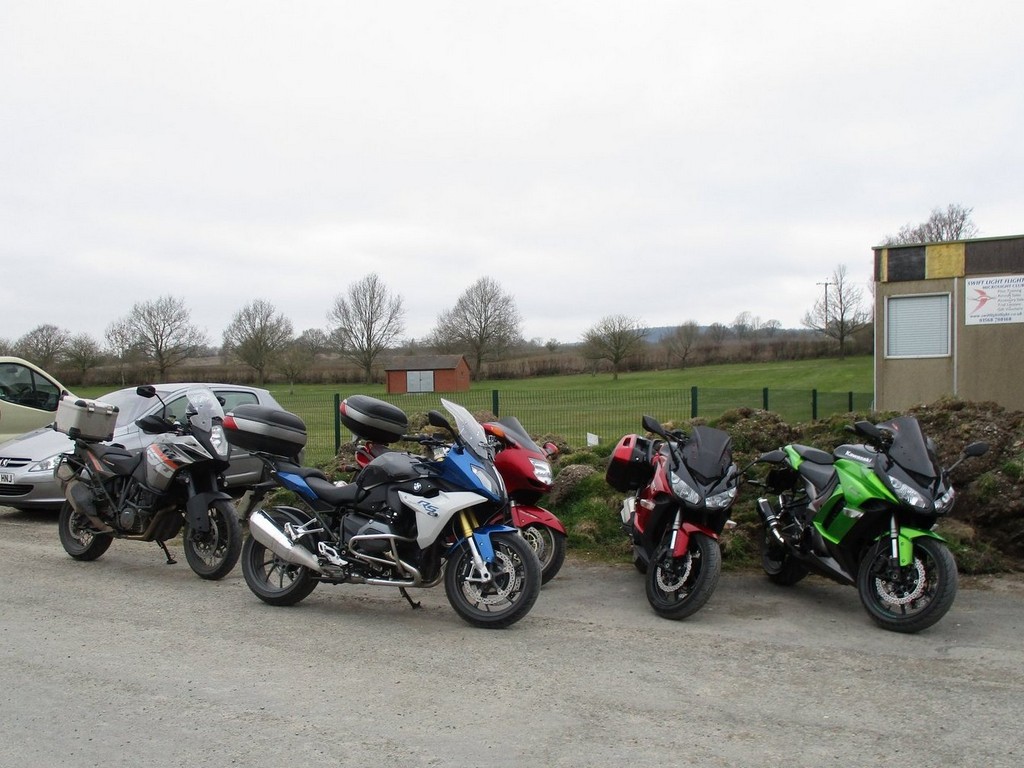 Bob had just managed the 60 odd miles from home without incident so it was inevitable that an event was due, Paul and I had gone on ahead leaving Bob “David Bailey” Hancock to his leisurely trek across the refuelling apron, by the time he had caught us up he looked like he had just gone a round or two with a bag of cement, yep you guessed it he had experienced an interface with the gravel footpath and had even taken a photograph of the grass as he descended gracefully to the deck, professional or what?

Once inside we all settled down to the usual banter of nothing in particular although the up and coming holiday was high on the agenda as was the “should we stay or bugger off” referendum, politics never being a “man in the street” strong point brought the usual rubbish cascading forth…… However Bonzo was just about to drop a, never heard before, bombshell, “I won’t be having a breakfast”, this killed the conversation stone dead as everyone turned in disbelief. To be fair Bonzo did actually look like death warmed-up he was as pale as a pale thing wearing a pale jumper in pale trousers and a rather fetching pale neckerchief.

After the initial shock had worn off, the conversation got back onto the breakfast theme and it didn’t take long for his stance to weaken a bit as he decided on poached eggs on toast. I went up to the counter to place the order, 3 breakfast’s and 2 Lysander breakfasts for the big eaters, Bonzo had come up behind to place his delicate order which he quietly expanded with “can I have 3 eggs oh, and some bacon with that?” 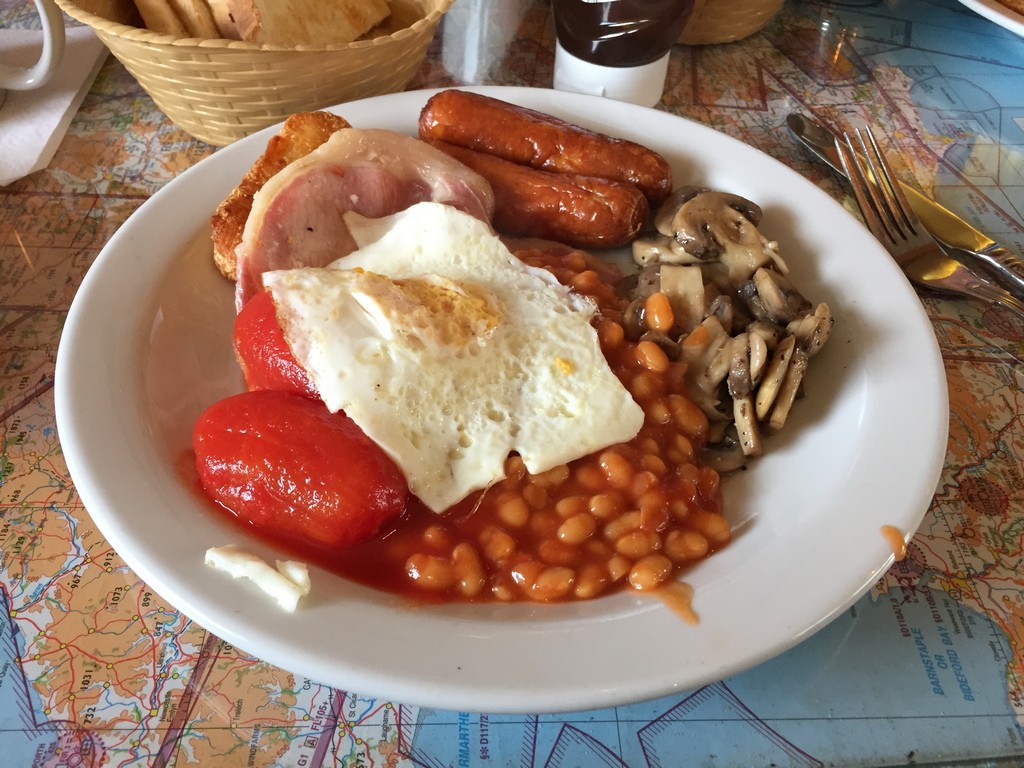 Returning to the table with liquid refreshments, the verbal rubbish was still flowing and it wasn’t long before Bonzo gingerly rose from his position at the head of the table and meandered off. After a while he returned and swiftly picked up his gear and announced he was going to clear off home as he was not feeling too good. With the imminent arrival of calories Ray & Darryl tried to talk Bonzo into staying a while so they could escort him back to the land of my Fathers. Bonzo was having none of that malarkey and won the verbal jousting contest so off he set, no doubt looking forward to the unpredictable trip home.

A leisurely breakfast ensued which included a share out of poached eggs on toast, plus the bacon of course, a most delicate of breakfast’s, Bonzo did miss out on a tasty treat.

With the bill settled it was time to head back home, Bob, Paul and myself decided on a bit of a longer way back and headed South a while to pick up the A44 back to Worcester and then the A422 to Alcester and A46 home. A decent trip out, dry roads and a belly full of breakfast, Perfik. 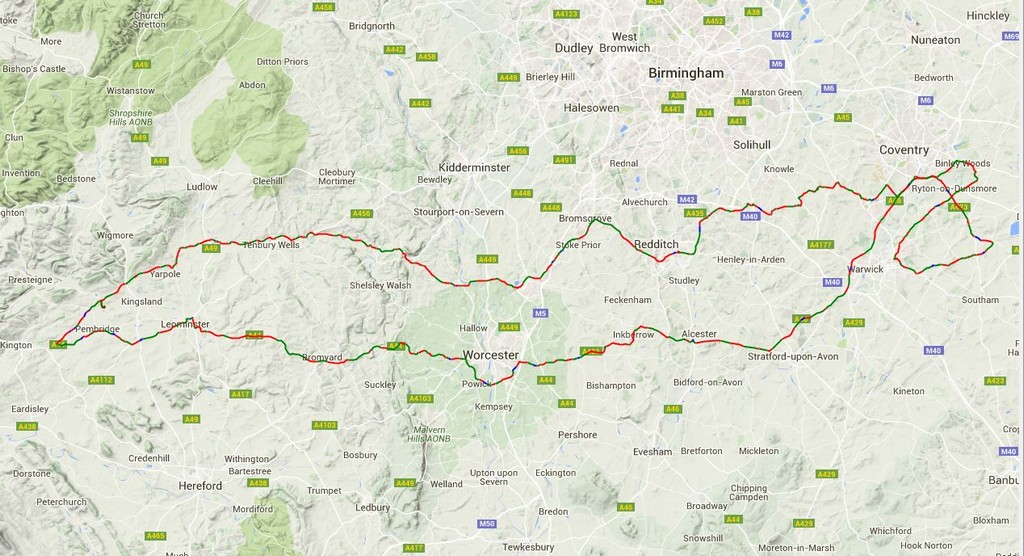