Billy no mates latest trip involved transport containing more than the usual two wheels and the target for the day was our capital city, London.

Billy was the guest of the day on “Wakes Tours”, now a bit of background is that Mr Wake is a supreme logistical expert and over the years we have been on many away days, mostly to the football where we have visited many grounds, both league and non-league, and the majority of which have not involved driving which means the full beauty of a beer and curry can be experienced without the associated drink/drive problems.

The day started with an early meet-up at Coventry train station, just after 7am to be precise, we were booked on the 7:45 train to Euston and considering we were only paying 17.5UKP for the return trip the train also came equipped with an engine, for that price I did expect a hand cart or two.

The outward journey went a smooth as silk, the ticket inspection meant a bit of juggling with the vast amounts of cardboard produced by the train company that made up the ticket but all was good.

Euston seemed to turn up quicker than the hour and a half that it took so after I had purchased the necessary daytime underground ticket we ventured down the stairs and joined the post rush hour throng on the capitals underground system.

Our first planned stop was at the Monument to the Great fire of London in 1666. There was a load of construction going on around the monument so it was difficult to get any photos without the tower crane taking centre stage. This was not to take away any of the majesty of the construction which was designed by Christopher Wren and is 202 feet high and stands 202 feet from the starting point of the fire, spooky that! I suspect it was a lot more imposing when it was built than it is today, it is surrounded by modern buildings and gets a bit lost, great shame but such is progress. 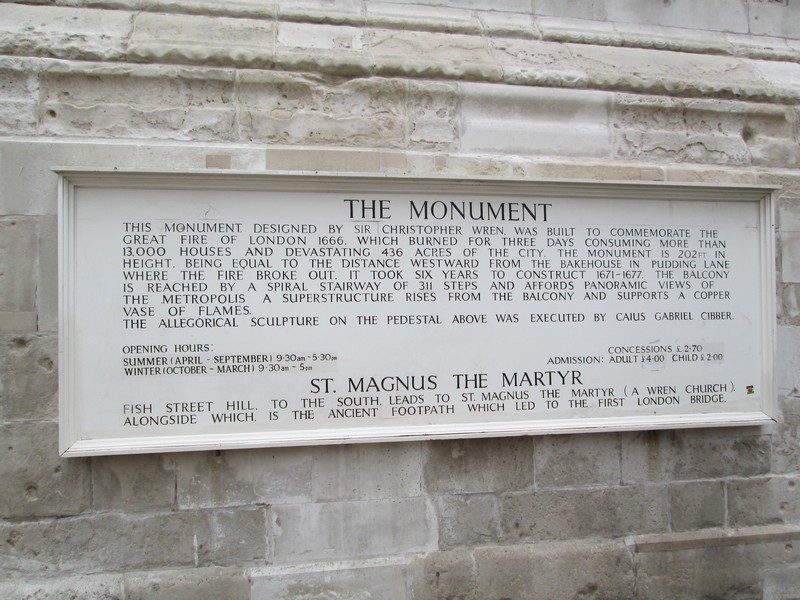 Monument to the Great fire of London

From the monument we had a steady walk past pudding lane and through the back streets to the Tower of London where at the time of our visit the moat was filling up with ceramic poppies. This was a sight to behold and the idea is to fill the moat with over 888,000 poppies, each one is meant to represent a military fatality during the first world war. A gentle walk up and down the moat fills you with wonder, firstly at the staggering loss of life and secondly the visual wonder of a sea of red poppies, most poignant. 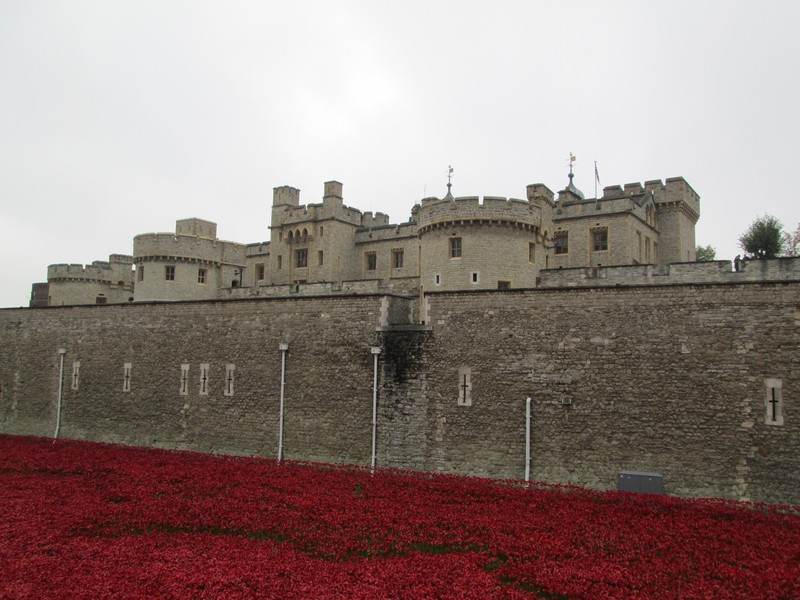 After the poppies spectacle we carried on along the embankment towards Tower Bridge, this is a most impressive structure and again you can only look and marvel of how it was built and with what sort of engineering expertise. The bridge is still heavily used today and forms part of the ring road, the traffic itself is carefully monitored no doubt to maintain the integrity of the bridge construction. It wouldn’t do the tourist trade much good if it collapsed under the weight of a few huge trucks which travel this way. 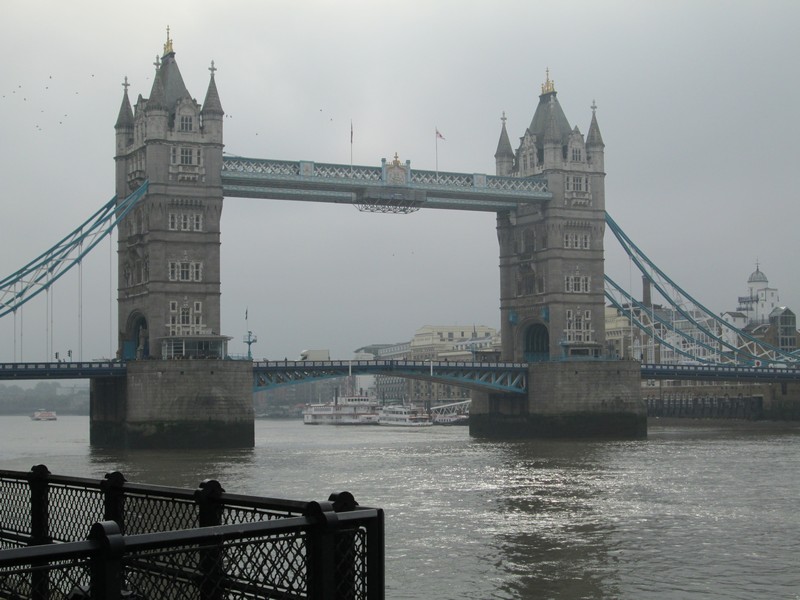 A steady wander across the bridge ensued; basic photographs do not do the engineering skill justice the construction has to be seen in the flesh to be fully appreciated. Turning right after passing over the bridge we walked back along the South bank which gave us a close view of HMS Belfast which is part of the imperial war museum and is moored in the Thames as a floating museum. 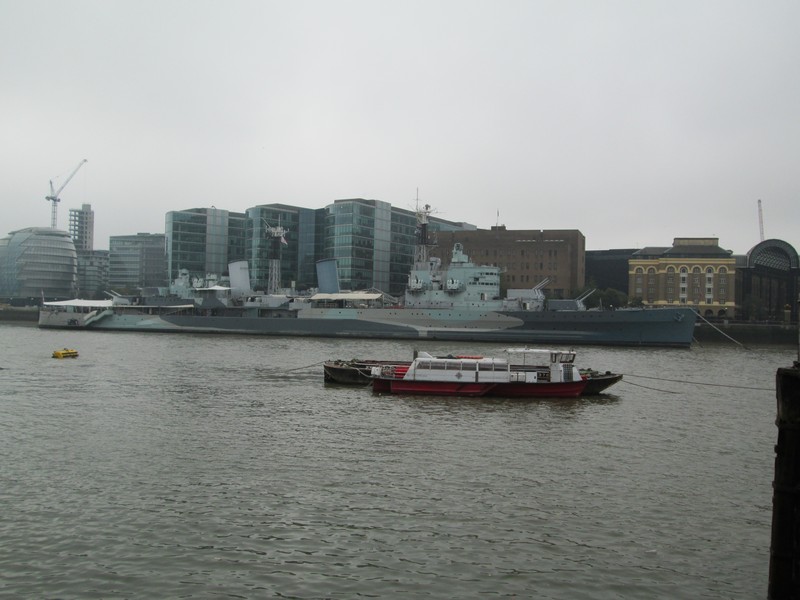 Carrying on past the HMS Belfast we headed to London bridge tube station to pick up the underground and head for our main stop of the day at the Imperial War Museum.

Exiting the tube at Lambeth North gave us a short walk to the museum and the opportunity to have a quick coffee stop.

The entrance to the museum is highlighted by two huge guns salvaged from a couple of battleships, HMS Ramillies & HMS Resolution these set off the fantastic building a treat. Once inside the museum is split over several floors, each one being dedicated to different times zones and warfare types. Working back our times gave us a slot of 2½ hours to wander around and the obvious starting point was the new first world war exhibition which takes up the ground floor. The exhibition is set out in a meandering style so you work your way through in one direction finally existing back into the entrance core area. This section of the museum took me almost two hours to walk through such was the wealth of exhibits and information available, hard to imagine the involvement of this primitive example of modern warfare. Mr Wake and I had got split up within the dark area of the First World War so with my remaining time I had a walk around the upper floors which contained the Second World War exhibits, the cold war and all points before and after. The one area I didn’t get to was the holocaust section but there will always be a chance for a further visit. 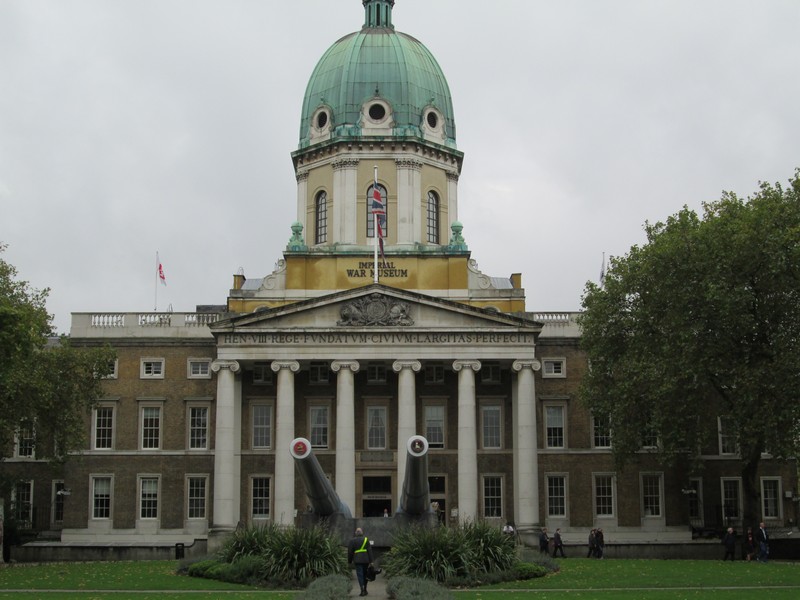 Exchanging text messages with Mr Wake sorted out a meet up point and at the end of our calculated time slot we headed back to Lambeth underground station and headed back to the Euston area where we could sample a few beers.

Now a further bit of background on Wakes tours is that Mr Wake is a member of CAMRA and as such has access to the real ale drinkers bible which he puts to good effect in choosing a selection of boozers that serve such delights. Our first stop was The Barley Mow in Marylebone where we settled on a pint of Fullers Red Fox as Mr Wake had knowledge of this brew and recommended its purchase, at £3.90 a throw it wasn’t cheap by midlands standards but was very nice and proved to be the best pint of the day. After our thirst quencher we ventured onto the second stop at The Albany in Great Portland Street, the beer price in here at £4.45 was a bit of a shocker and it certainly wasn’t worth that princely sum, so Bath Ales Forest Hare came bottom of the scoring charts and if we were in Strictly Come Dancing land would definitely be in the dance off with no chance of being saved by the judges…… Onto our final pub stop which was The Dover Castle which nestles in the backstreets, the ale in here was Samuel Smiths Old Brewery Bitter, which, at a very modest £2.90 was by far the cheapest of the day and quite acceptable so nestled in second place in our scoring chart. 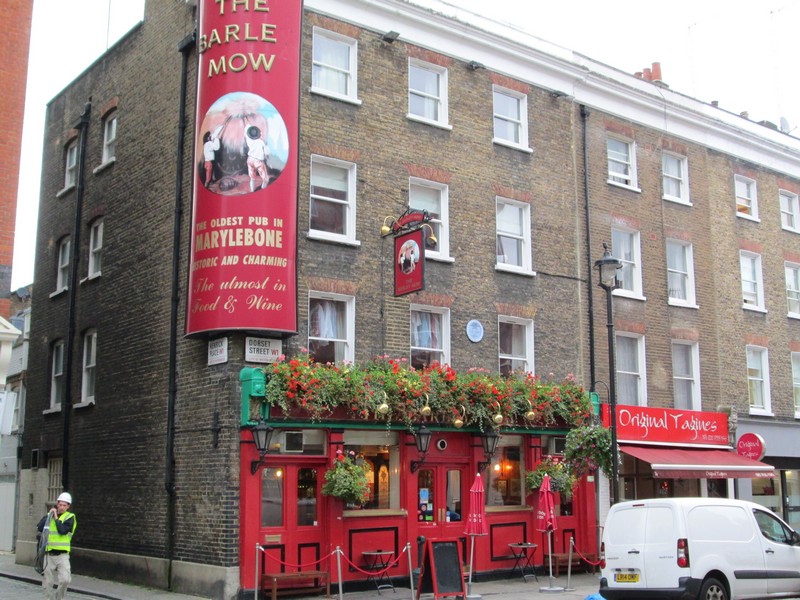 After sampling the delights of London Ale houses it was time to venture to a curry house to cap off the day, research had brought up Drummond Street which seemed to be full of curry houses so we headed straight there and tried to make an educated decision on which looked the best, we finally settle on The Taste of India, mainly because the waiter offered us free poppadoms and pickles. The vindaloo in here was very acceptable so with some rice and a naan bread washed down by overpriced Indian lager our bellies were well stuffed ready for the return train trip back to the Midlands. 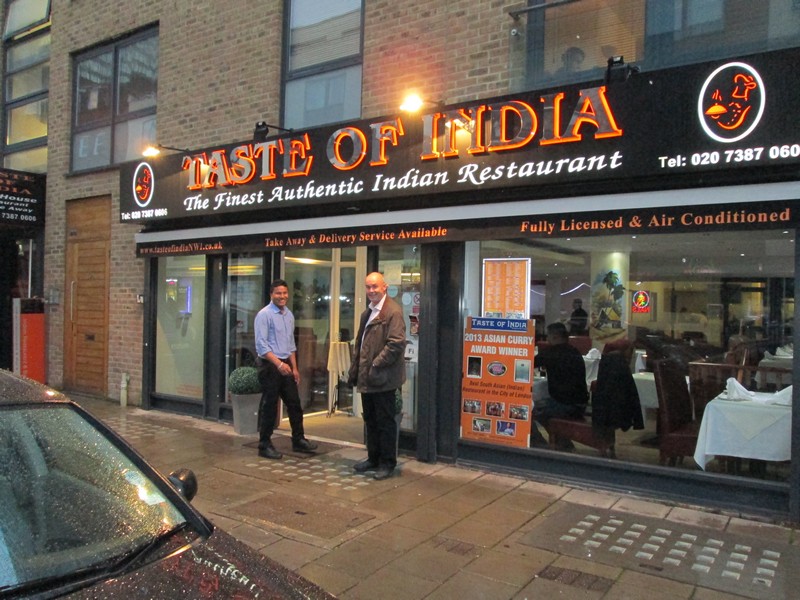 The Taste of India

The railway companies tactics at Euston leave a bit to be desired, the platform for your train only comes up on the boards ten minutes before departure, this results in a mass scramble to the train and to find a seat, luckily it wasn’t too busy. We were careful to take up our position in the first four carriages as the train gets separated en-route and we didn’t want to get left behind.

Overall it was a tremendous day and Wakes tours once again came up trumps with everything going to plan as one comes to expect from Mr Wakes involvement. A big Thank You to Wakes Tours.