The search for a more practical replacement to the Street Triple had gone through the Yamaha MT-10 (FZ-10), Kawasaki Z900 and arrived at the Honda NC750X. Having had an adventure bike previously this model had the potential to meet the two up Sunday trips out tick box so off I toddled to Blade Honda in Stratford to have a look

I hadn’t initially considered the DCT version but after a trawl of YouTube I was suitably intrigued, going through the usual ritual of sitting on the machine in the showroom, I satisfied myself that it wasn’t an unwieldy beast to push in and out of the garage and organised a test ride for a week or so ahead

The test ride date duly came around so on my Friday afternoon off I took myself to scenic Stratford with a bit of trepidation, the last time I had ridden a twist and go machine was during the moped year of 1974.

After a couple of push back and trial starts at the front of the dealership it was time for the off, concentrating extremely hard on trying not to use a non-existent clutch I slowly approached the first junction, luckily the lights changed as I approached so got away without stopping, turning left onto the main road I joined the slow-moving traffic, it was a short leg to the Tesco supermarket entrance island and as you would expect I went for the clutch, Doh!!!, my fingers were clutching thin air, a quick reset of the brain had me back on track and during the following 50 odd miles I never did it again

So, onto the bike itself, the balance was good, no indication of the weight of the machine, apparently it is well over 200kg but on the move, it felt light and agile enough for my needs. I was a bit wary of the OEM Bridgestone tyres fitted to the 17” wheels, my considered opinion of these is still tainted from my 1970’s experience of Honda OEM tyres which seemed to be a plastic-type consistency and it was a race to wear them out and get some Dunlop TT100’s fitted, however, they performed ok on my short stint and all was steady with no dramas even with the 39 miles on the clock. 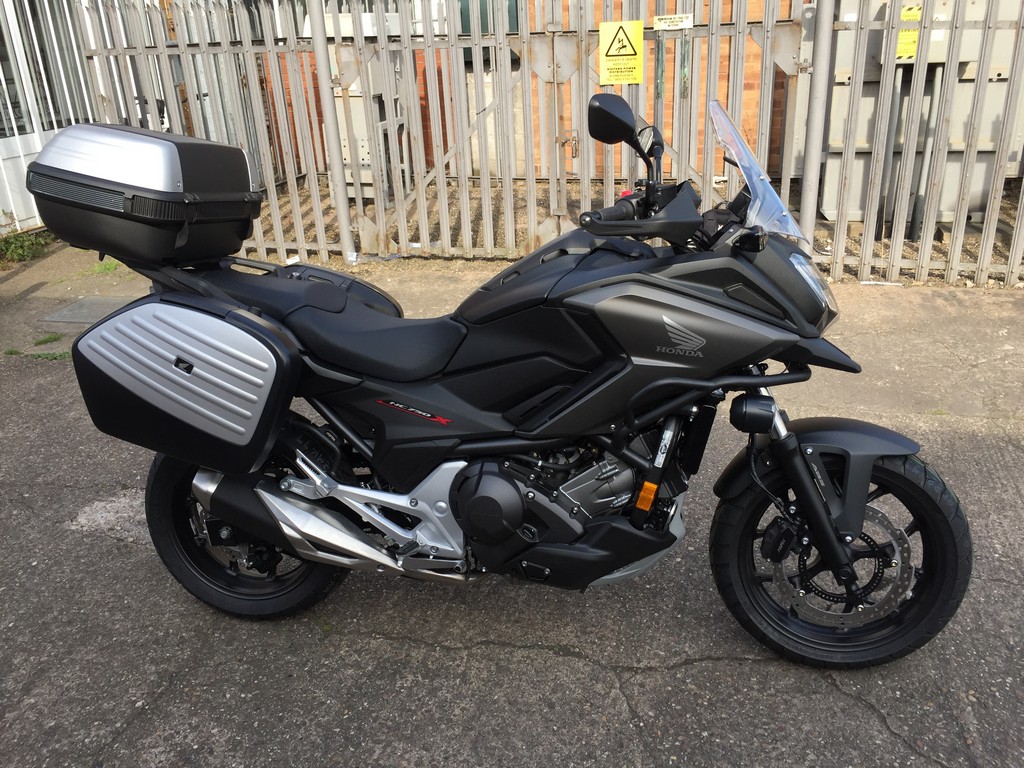 Performance from the parallel-twin with 50 something BHP engine is fine for legal speeds which is just what I am after. The required speeds in all situations were reached as I needed. OK so far, onto the elephant in the room, the DCT gearbox, this is excellent and, once tried, no doubt the main selling point for this bike. There is a bit of a “clunk” as it goes from neutral into first but everything else is smooth as smooth can be. In drive mode you are up into third gear in about 50 yards which explains the fine fuel economy, another tick box filled! There was a bit of “chugging” occasionally if you caught the gearbox in a higher gear than needed but this was soon rectified without intervention. 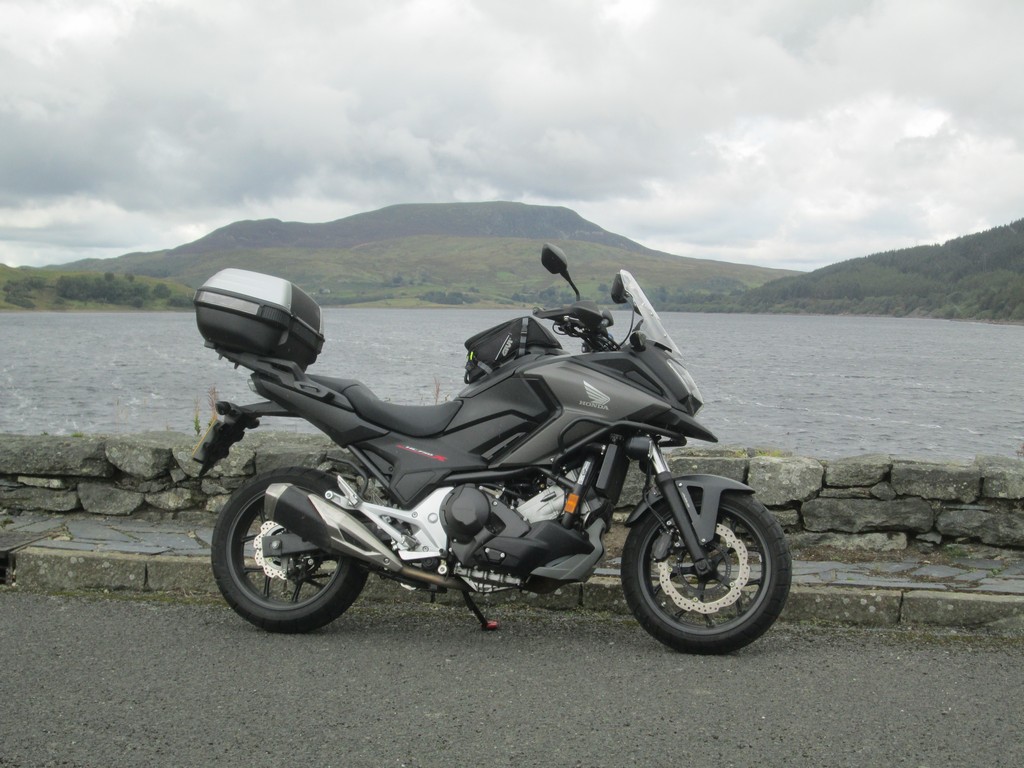 The box of tricks contains three sports modes which encourages the revs to be held in each gear and gives the impression that the bike is leaping out of the traps. If needed the gearbox can be prompted to change up or down but it soon sorts itself out and gets back to its “I know best mode”, this feature is useful on overtaking but the “wind it open” kickdown is adequate for this purpose so the only benefit I derived on my short trip was to keep the revs up going around a traffic island.

Finally, on the gearbox, there is a manual option available which is controlled by the nut holding the handlebars via the up/down paddles. This I didn’t get around to trying this as the auto setting were perfect 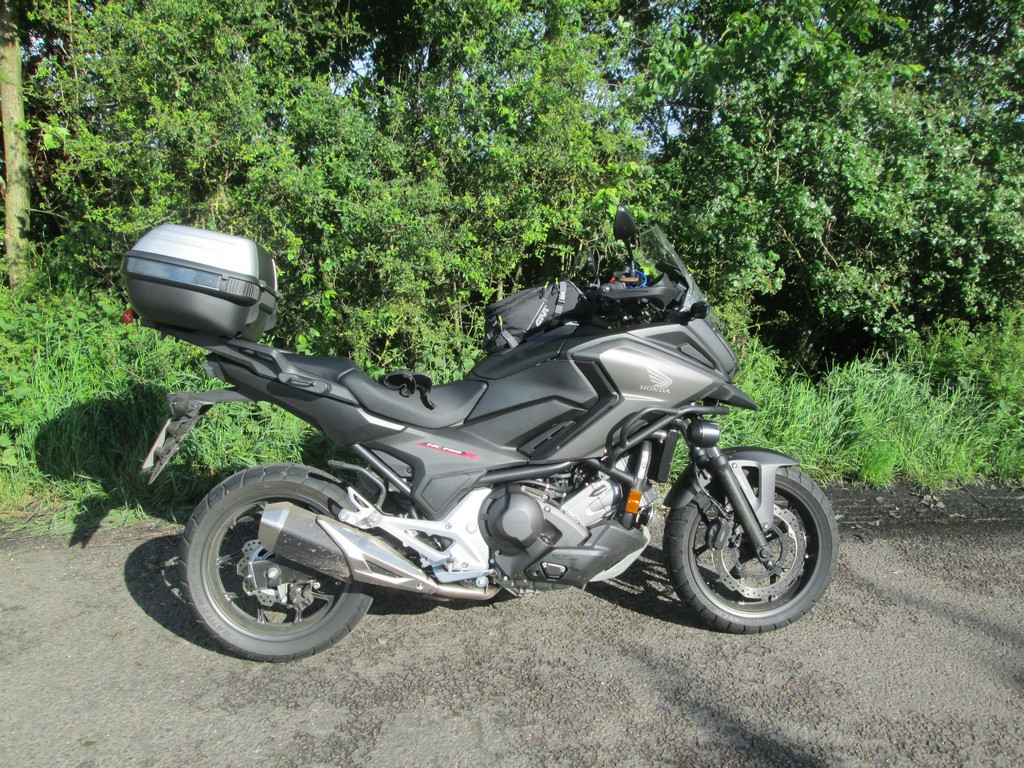 So much for the bike’s performance, onto the good/bad/curious points…. The fuel tank is under the seat, filled by lifting up the passenger perch, the space where the tank should be is a cavernous storage box, it can accommodate a full-face helmet, dam handy or what! The screen deflected the main windblast away from the body but may be a bit on the low side, this will only be discovered after a few trips. The dashboard was a bit trick with different coloured displays and the rev counter bar turns red when it thinks you are burning too much fuel, however, I thought it was a bit on the small side given the amount of information it was trying to throw at you.

Overall the bike is a typical Honda effort, feels solid and well built, performance is in line with its looks, just right and functional, it will never set the roads alight but then it’s not designed to do that. Would I buy one, well yes I did, with all the twist and go concerns consigned to the bin I am looking forward to exploring the auto box further and get back out on the weekend roads… 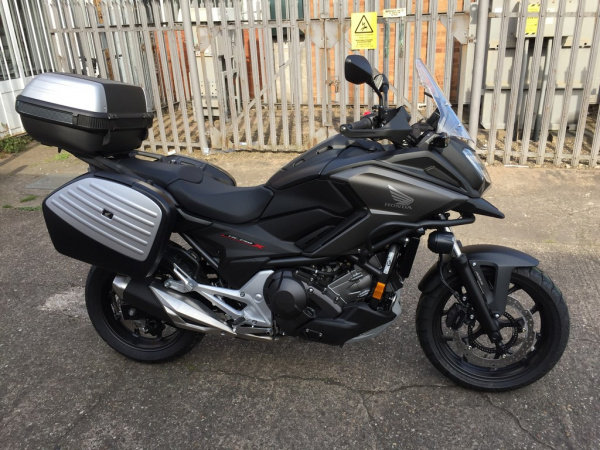 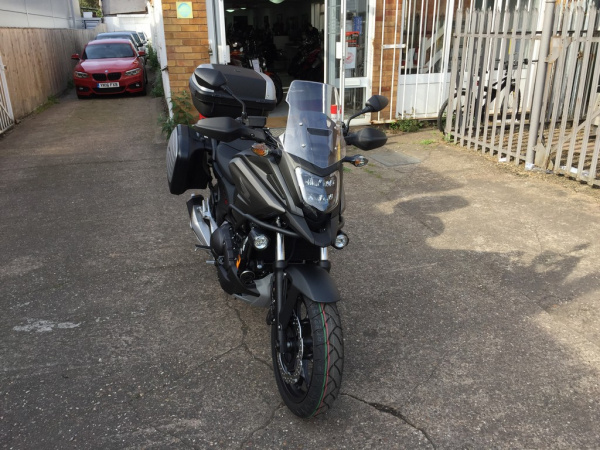 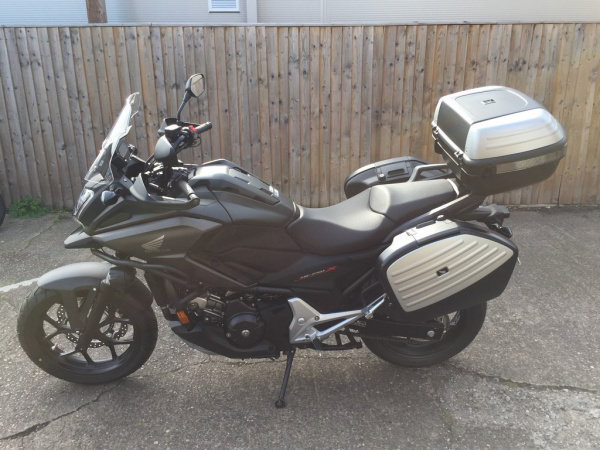 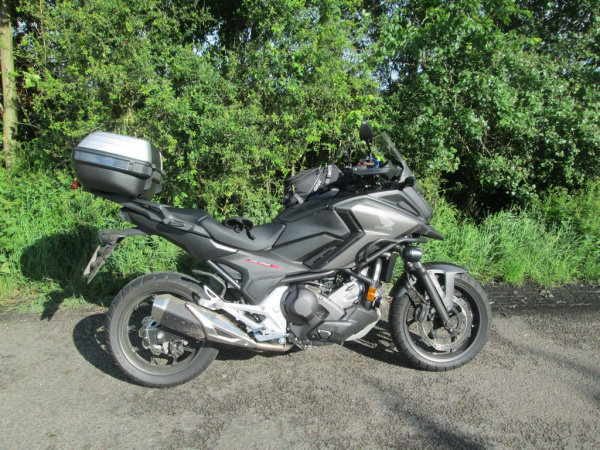 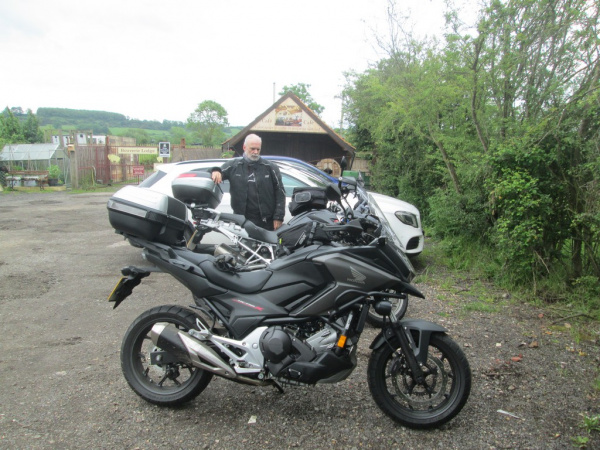 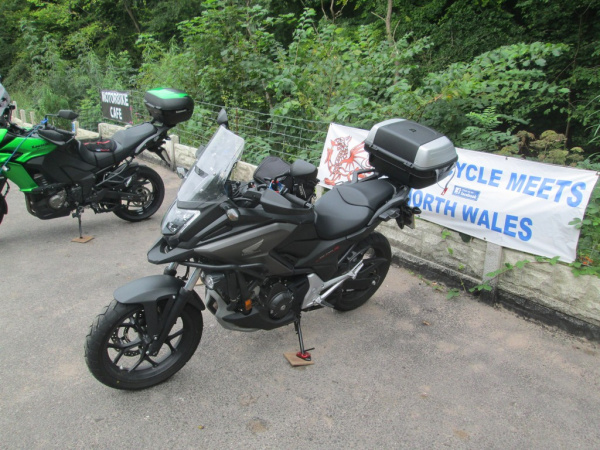 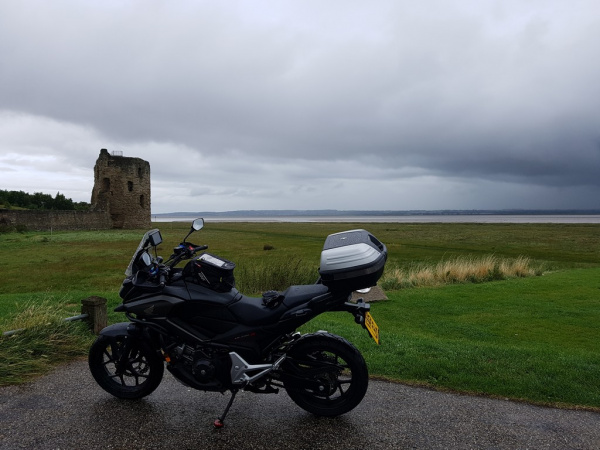 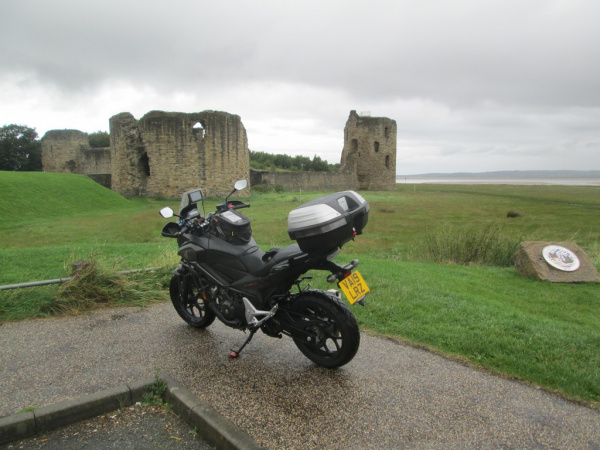 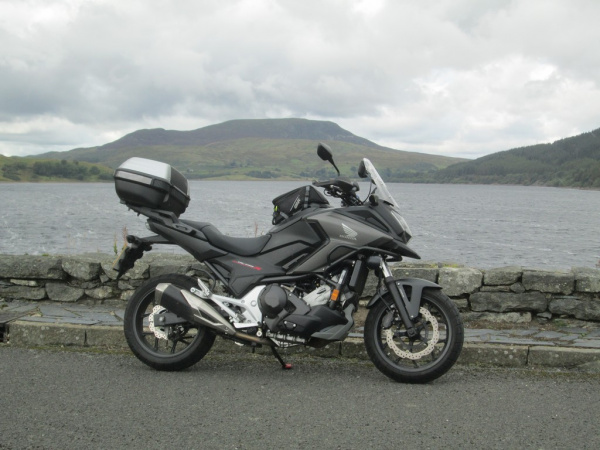 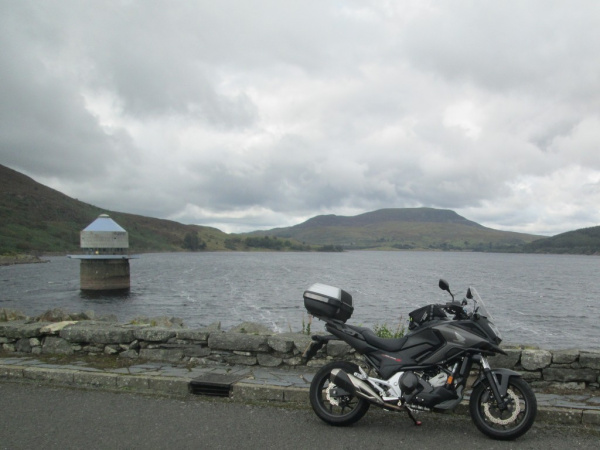