Well it all started with a bike clean on the 17th of September as we were not going to get much work done so the next morning Chinny was knocking on my door about 4.20am and after a cup of tea and a chat, we load the bikes up and left about 4.40am. After an hour and ten minutes we meet up Bonzo and Ray at Newbury services, with us needing a hot drink after the cold and foggy drive down. We all fill up and blasted off to Brittany Ferries at Portsmouth and the sun is shining hopefully a good omen for the trip ahead.

We get on the 8.45am ferry to Caen which docks at 15.45pm English time so 16.45 French time. We have bit of a blast down the A84 to Rennes, around the ring road and blast off towards Redon. Before we get ½ mile away from the ring road we are pulled up by the Police for the noise and speeding. They checked insurance and licenses, two coppers were alright but the third did not like my exhaust said that they are illegal in France with no baffles, they did not like Rays tyre as it’s a bit on the limit plus he had not got any insurance or licence on him. They even make us take a breath test to make sure that we had not been drinking. There was a mention of paying some cash with the police talking to each other, but they then let us go, phew!!

So a blast off down the D177 to Redon where we called at the Pil a Pil restaurant in Rue Victor Hugo, where after consuming some of their dam good pizza we headed to our house for a few beers out the fridge, a bit of telly and so to bed.

Friday
We got up and I cooked the lads a ‘Bob’s English breakfast’ (never mind the hairy bikers) lol. We decided to have lazy day and a small ride out, so off we go towards St-Nazaire on the D177. We cross the bridge on the D213 then cut off towards the costal roads at Pornic (Bonzo’s favourite place for some reason) driving all along the coast to La Barre-de-Monts. We were trying to get to the island of Noirmoutier but it was getting a bit late so we headed back across country to Le Pellerin. We crossed the river on a free ferry on the D91 into Redon to the supermarket to pick up some steaks, chicken, beef burgers and salad (well tomatoes any way).

We get back to our house to flash up the barbecue, park the bikes in Terry’s garage next door. We then had a proper man’s barbecue which consisted of meat, meat and more meat oh and the token tomato all washed down with a load of beer.

Saturday
We decided to get up early and go pick breakfast up on the way to Cognac. We then started off through the back roads to Nantes and I only dropped the bike once. He he. We were looking for yet another tyre for Ray (this is the third one, one in Spain and one in Andorra and one in France). We found a lot of shops for bikes and tyres in Nantes. So off with a new back tyre, Ray’s smiling and off we start, around the ring road and down the N137, a nice fast road. We went to Chantonnay and along to the N148 to Niort around the ring road and down the N150 to Saint Jean-d’ Angely then down the D939 to Matha. After that we found some crappy back roads to Cognac. We then went to the Cheval Blanc hotel (White Horse) which I booked by phone from Nantes as Ray wanted a bit of comfort (more likely some clean sheets) they said no problem see you later. When we get there we were told that they where very busy but had got only one room left (so much for my French) which has two beds upstairs and two beds down stairs. Nice new building and large en-suite. Only 75 euro’s with breakfast another 5 euro’s each, Eric the boss gave us a free beer each, thanks Eric.

We got changed and walked the 300 yards up to the town where we had a few large beers at a bar sitting outside watching life go by (looking at the ladies more like). We then went into a restaurant for a meal and more beer and a bottle of wine (Well France is famous for its wine so it would have been rude not to sample a few bottles) and on the way back we called at a small but very livery bar and had a couple more beers and the lads went off to bed leaving me there, so I had another three small beers then the boss got me another one. Afterwards I staggered back to the hotel using my well tuned beer compass and woke up the boys who were fast asleep, all in we had a bloody good night.

Sunday
The next morning we started with a traditional French breakfast with some fresh bread, croissants and a bowel of fruit (haven’t seen this on the hairy bikers). We then packed our bikes and headed off towards Saints we then got on the A837 motorway looking for petrol but no services, so we get off onto some back lanes with grass in the middle on the road (SAT NAV on shortest route and onto the N137 found a Super U supermarket and filled up at a 24 hour pump and the cards worked (not all English cards are accepted at some supermarkets) we then got back onto the A837 and then back on the N137 off onto the D937 towards La Rochelle where we stopped at the marina and called at a café for drinks.

We go out of town on the D104 to D105 onto D9 towards La Roche-Sur-Yon and we stopped at a nice restaurant for more drink and food. We then headed up through Lucon on the D746 and we went through La Roche-Sur-Yon and out on the D937 where we then joined the D178 to Rize we traveled along the D145 across the river La Loire on the N844, and we picked up the D201-N165 we turn off on the D15 we cut back on the D164 then have a little divert in Plesse to stop and have a drink in the bar. (did you spot the pattern here?)

We then nipped to our house in La Touche empted the top boxes and shot into Redon for a meal at a restaurant by the river. After a couple of soft drinks and a ride back we settled for some beers and a few laughs about the journey and Bonzo’s shiny head.

Monday
We got up had a Bob’s breakie using double of everything just to get rid of what’s left in the fridge (Fat Bastards) afterwards with a full belly we then went on some nice roads to Guerande, an old walled city. We had some drinks at a bar in the town then decided to go to La Baule. Now that’s what you call a beach, so with another stop at the beach bar for some food and drinks and try and get a tan with leathers on. So we then cut across country and head into Redon, go to the supermarket and get some more meat shoot back into La Touch and than have another man-beque with loads more meat and beer, we also fed the local wild cats that our neighbours Jackie and Terry have trained into house cats (good to catch to local vermin). Lol. Also you can leave them in there in a nice kennel that Terry has built for them when on holiday.

Tuesday
We all get up have showers and clean up and pack the bikes. We head off early towards the port. So we head into Redon and out on the D177 towards Rennes (looking out for the police) we fill up with petrol and go onto the ring road around Rennes and along the A84 towards Avranches. We make our traditional stop at the Le Mont-Saint-Michel services for food and drink and then carry on along to Avranches and turn off on the old road D937 towards Sartilly and onto Granville after a bit of a ride around the town we head out on the D971 to Coutances we head out of town on the D244 and D268 and get on the coast road D650. At this point the road was soaking wet but we had a few spots then the road just dried and all was good again(great) We carry on till we get to Saint-German-Sur-Ay then we turn off on the D306 and into La Haye-de-Puits where we stopped for more drinks and a chat.

We then give it some stick up the D900-D2 towards Valognes and jump on the E46 to Cherbourg. We stop at the supermarket for a bit of shopping and fill up.

We shoot down onto the ferry port and relax. After the fast ferry home we stop at the Little Thief (Little Chef) on the A34 and have 4 large all day breakfasts, which went down very nice. We then said goodbye and headed to the M4 waved Ray and Bonzo off and headed home. 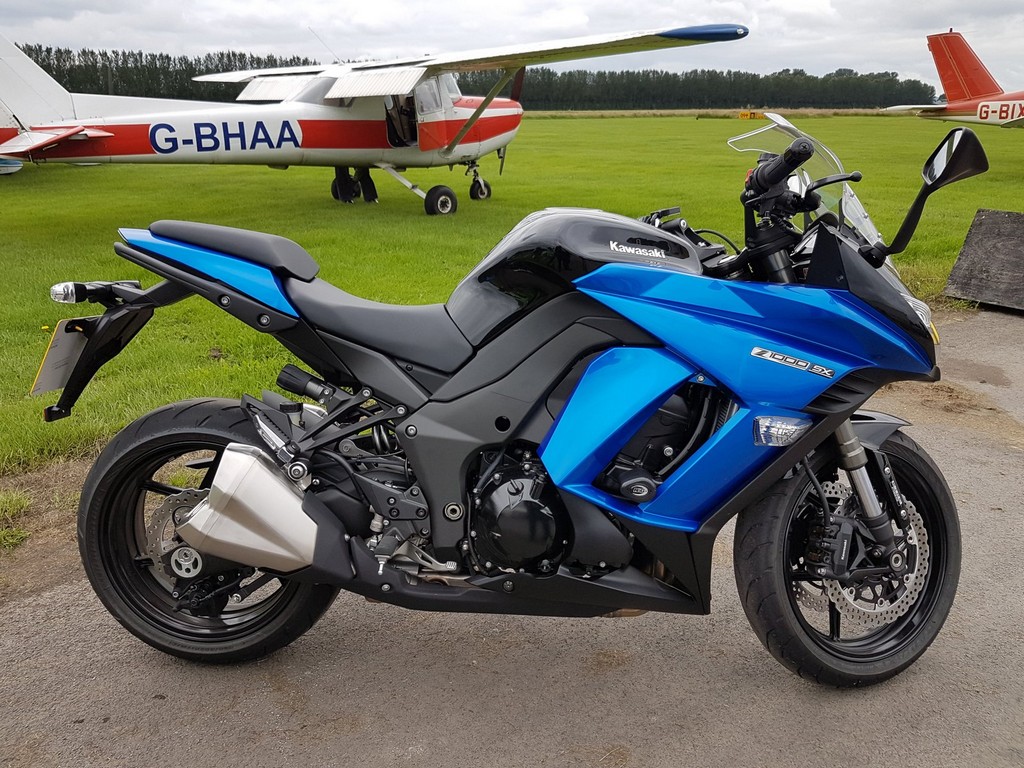 After 11 months or so with his Kawasaki ZZR1400 Bonzo traded it in for a brand new Kawasaki Z1000SX. 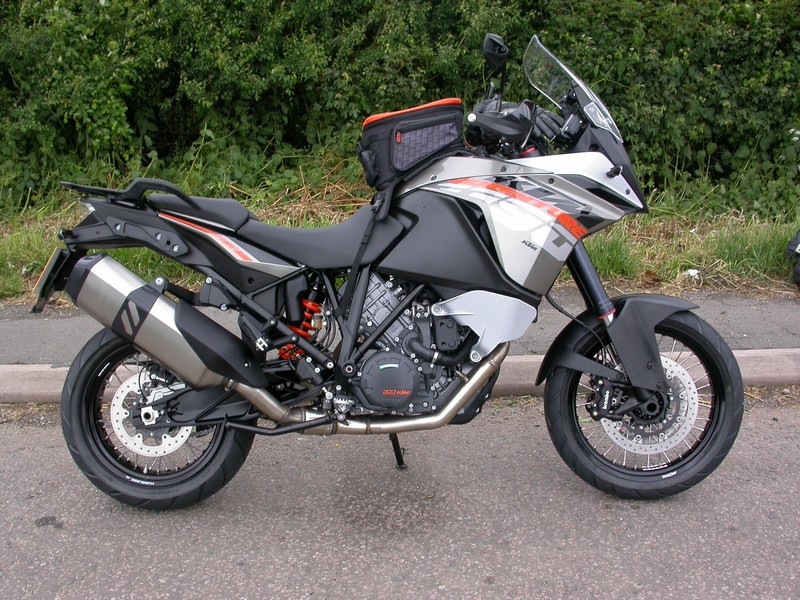 As the saying goes “Time & Tide Wait for No Man”, I was finding it increasingly difficult to justify having three bikes in the garage, each one costing more in the basics of road tax Read more…