We had about 10 or 11 days to complete the trip, we had planned each days riding, worked out where we were going to stay, everything seemed perfect… until we started…Ahhh what fools we are

We were leaving Tamworth (near Birmingham) at around 03:00 (yep that’s 3 am in the goddamn morning) so myself, Hank & Andy met up at Hank’s house all ready for the trip, got onto our bikes, and then spent the next half hour attempting to get Andy’s CBR400 started. It turned out that Andy had jet washed his bike the night before, and not started it since. Water had got into the carbs and it refused to start. Seeing as we were supposed to be meeting up with Bob at 3:15 and it was now 3:35, we all decided to leave Andy to strip, clean and rebuild the carbs while me and Hank set off to catch up with Bob and then the ferry crossing at 7 am from Dover.

We met up with Bob on the services of the M6 and then proceeded to ride the 220 miles to Dover. To say it was a little chilly was an understatement, IT WAS BLOODY COLD. We got to Dover at around 6:30 caught the ferry to Calais with plenty of time to spare (and thaw out!)

When we got to France we attempted to contact Andy on his mobile, but we were unable to get in touch with him, so we went into Calais to purchase some supplies (OK I admit it many cases of beer!) and then we pulled over onto the side of the road and waited, and waited, and waited. After about an hour we saw a bright light on the horizon and as it got closer, we could make out a small shape, It was Andy astride a working CBR400!! He had missed the Dover ferry by about 15 minutes and had to wait for the next one.

Andy then told us how he he had ridden flat out, only stopping for fuel, to try to catch us up, then once on the ferry, his petrol tank had sprung a leak and dumped most of its expensive contents over the ferry deck, things were not going well, could this be an omen?

We had decided to stay in Formule 1 hotels, These are in most towns and cities around France, and only cost around 110ff – 140ff (about £11 – £15) per room. These rooms can sleep up to 3 people, has no television but a washbasin and are spotlessly clean. You have shared toilets and showers, but there are plenty of them and they are of the new type where they run through a cleaning cycle after each use. Very clean, Very tidy, excellent value for money (end of advert).

Over the next couple of days we headed mainly south-east visiting the French towns of Reims, Metz, Dijon, Lyon and Albertville, each place we stopped we were welcomed and made to feel at home, it is amazing how the French people treat bikers compared to the usual hassle you get here in England.

One of the stories I had heard about the French police is that they can do you for speeding just by looking at your ticket that you get when you entered the toll road and comparing the time it took you to cover the known distance between two stops, I only saw this once and this was on our way towards Albertville. We jumped onto the motorway, got our tickets and then proceeded to have a mad high-speed thrash all the way to Albertville where we got off the toll road and there waiting at the pay station was a large group of French police, one in each toll booth, checking the average speed of all the people. 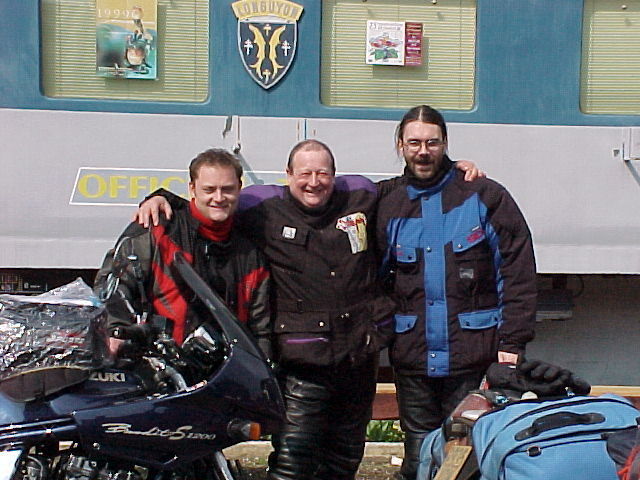 It was at this point I remembered all the horror stories about the large on the spot fines that the French police dish out. G U L P! So as I gingerly passed the lady in the toll booth my ticket, I sat there waiting for inevitable to happen……. The lady shows the French policeman my ticket, the policeman looked at the ticket, then looked at me, then slowly shook his head sideways, as if saying “Tut Tut” then waved me on! either he thought what a nice looking British chap, he would never speed must be a problem with the ticket OR took pity on me after looking at the state of me and my Bandit.

We again stayed in a Formule 1 hotel, surrounded by the snow-capped Alps and next morning set off for Italy!!!

We headed towards Italy in through the Frejus tunnel (an eight-mile tunnel through the Alps) and exited the tunnel in Italy complete with snow shower!. Next, it was on to Turin, Milan with a stop in a 5-star hotel in Piacenza.

We decided to stay in this fancy 5 star hotel for two reasons. 1: We had spent 2 hours looking for rooms with no luck and 2: we thought we deserved a bit of luxury. After an absolutely brilliant meal in a local restaurant, we then spent the rest of the night in the hotel bar teaching the barmaid (Elania) how to swear in English and in return she was teaching us the finer points of swearing in Italian. 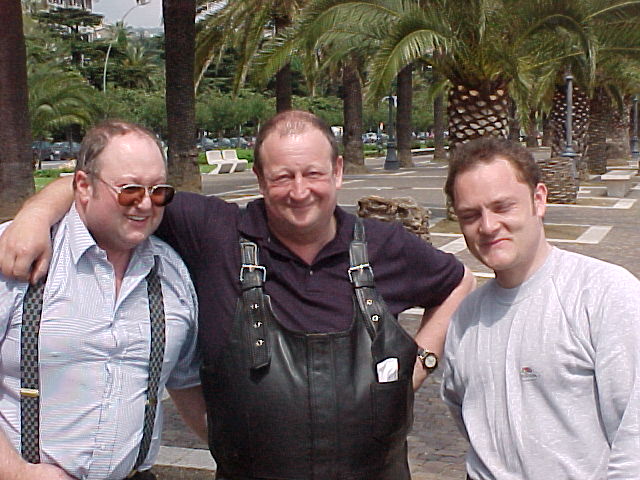 The following morning we started towards Bologna and the Ducati factory!!! that is until Andy’s CBR400 suddenly slowed down….. After a little investigation, it transpires that the little CBR’s throttle cable had snapped. BOTHER! After stripping the tank, seat, carbs, airbox etc off the little Honda CBR and removing the offending cable we then proceeded to stand about in the middle of nowhere scratching our heads. Now if it had been Me, Hank or Bob we would have just called on the services of the excellent AA as we all had AA’s European 5-star cover, but it was Andy, and all he had was a problem. It was at this point a man pulled over in a car and asked in broken English if he could be of assistance, after informing him of our problem he then drove Andy to his mates push bike shop who made him a cable and then drove him back, neither the driver or the guy who owned the shop would accept any money for their kind help, and within an hour of breaking down we were back on the road again looking forward to visiting the Ducati factory and museum. (Ohh how foolish we were) 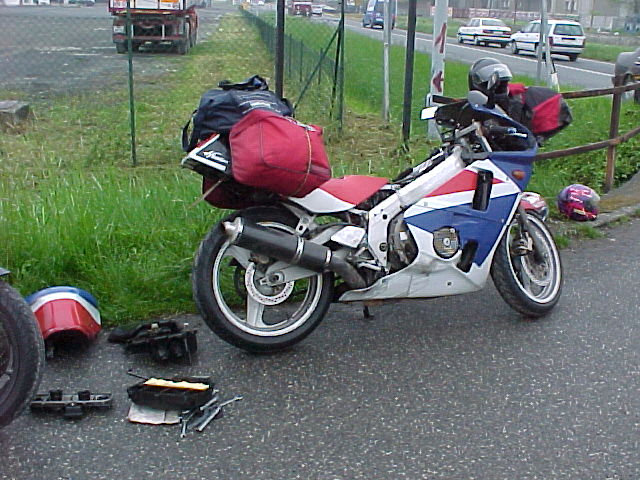 Because of the time involved in the breakdown and the time it took us to get to Bologna we didn’t arrive until 4:00ish, we then spent the next hours ATTEMPTING to find the Ducati factory or museum. We were on the right road, the bloke in the petrol station told us it was just down the road on the right, at the other end of the road another bloke told us we had gone passed it and it was back up the road on the left, we even had a Ducati museum leaflet WITH A MAP ON IT but STILL could not find the place. What bloody fools are we, travel from the UK to France and Italy and we couldn’t find one building along a two-mile stretch of road!

, In the end, we gave up and headed for Pisa and another night in a hotel. All of this time it was either raining or thinking about soaking us and we were happy to get into a dry warm hotel.

Pisa was uneventful, we came, we saw, we bought not only the T-shirt, the postcard and loads of other tourist type crap and headed back towards France following the SS1 and the coastline. And then IT happened, Yes it really did while travelling along the SS1 at La Spezia the sun came out! we were so confused by this change of event that we had to pull over and stop on the seafront for an hour just to make sure that we weren’t imagining things!

After a brief stop and a chance to top up our tans, we followed the coast roads for a little while longer before heading north back towards Albertville…Except that by the time we got to the Frejus tunnel my Suzuki 1200 Bandit was in serious need of fuel (As always), Hank says “Don’t worry there’s a petrol station on the other side” so off we go into the 8 miles long tunnel, and about halfway through, the Bandit runs onto reserve, when we get to the other side it transpires that the “petrol” station is a “Diesel” station and Suzuki didn’t make Diesel Bandit 1200’s!. BOTHER. Now the options were 1) Jump onto the nearest main road and *HOPE* for a petrol station soon or find a petrol station in one of the local villages. We opted for number 2 and eventually got the bike to the little village named Saint-Michel-de-Maurienne where we found a petrol station, but it was closed! A hotel was found and then a bar commandeered and we then proceeded to have one of the best nights of the entire trip. This is one place that I must return to.

Over the next few days we headed north towards Paris and stopped outside the Eiffel Tower for pictures and a walk including a sitting on a bench sheltering from a downpour of rain with about 20 other tourists singing “The Wheels On The Bus…” and then onto Dunkerque where we stayed for our last night in France and were forced to consume the remainder of our beer supply. Early next morning we headed for Calais and the ferry home. 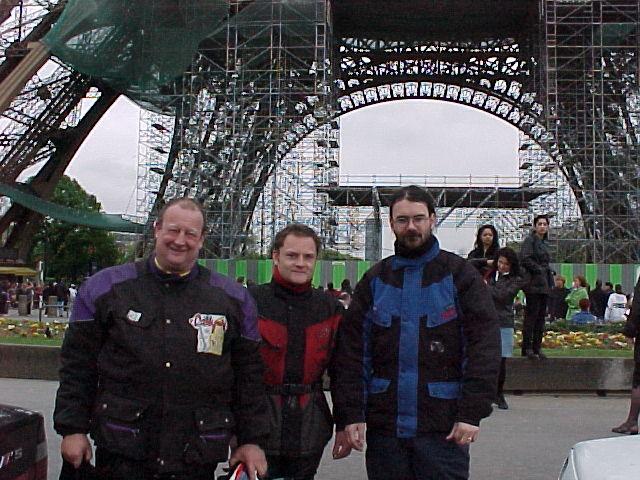 Although we didn’t visit as many places and countries that we had hoped or planned, We spent a lot of time riding the bikes and we all had great fun, This is just a brief description of the journey, with many more tales and personally will be one of my most treasured memories for a long time to come.

We learnt a great many things during this trip, but I feel mine is the overwhelming urge to do it all again and again and again! If you are contemplating going abroad on your motorcycle, JUST DO IT.

Thanks to Hank for organising the whole event and for being on point so that the rest of the group had someone to follow.

Thanks to Bob and Andy, both tremendous sources of amusement and a vast quantity of beer.

Lastly the biggest thanks must go to my ever-loving wife, Tracy, who at eight months pregnant understood my need to travel and complete one of my life’s ambitions. Tracy, I Love You. Thanks.