Arriving at Bob’s gaff at the usual time, it was a quick turnaround, Bob was already on his way out of the door, he was a man on a mission, there was nothing going to stop him reaching the Bringsty cafe and scoffing the resulting fry-up. 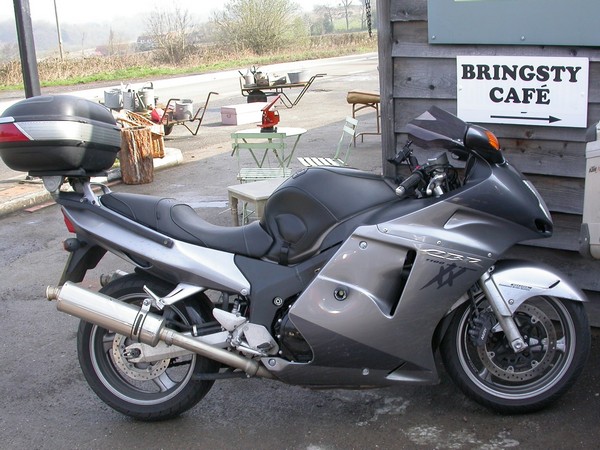 A semi scenic route was taken, through the lanes to Redditch and onto Bromsgrove, a bit of road work negotiation on the M5 and it was onto the sweet A44 to Bromyard. In Bob’s haste we even beat the “Men of Harlech” to the cafe so settled down to a well-earned refreshment. It wasn’t too long before the South Wales contingent drew up and after much deliberation, well 2 or 3 seconds anyway, three large and one medium breakfast was on its way, not forgetting the extra toast….. Conversation swung to where we should go next, Ray came up with suggestion of Shobdon Airfield Canteen at Shobdon Airfield, sounded a plan so the Sat Nav’s were sorted and once I had worked out which way up it went we turned left out of the car park and off we went.

Once in Shobdon the airfield was well signposted, it is down a lane that could be a bit dodgy in the rain but as it was dry and warm no problems were encountered. The cafe was clean and tidy and the airfield was surprisingly busy for a small place, plenty of light aircraft movements. The location was mentally logged for a return visit to try the breakfast. The decision on the next port of call was not so easy, the conversation swung from Aberystwyth to Barmouth and back again, eventually Barmouth won over, probably because it was easier to spell on the Sat-nav keyboard…..

Off we set, literally onwards and upwards, the route took us over the mountains to a height approaching 1740 feet above sea level, a stop was made in amongst the sheep (apparently the Welsh like to do this sort of thing!!!) for a photo shoot. This chosen route, fantastic as it was, seemed to go on forever, the miles were being covered quite slow, or so it seemed, however you cannot complain as the scenery is some of the best the UK has to offer. 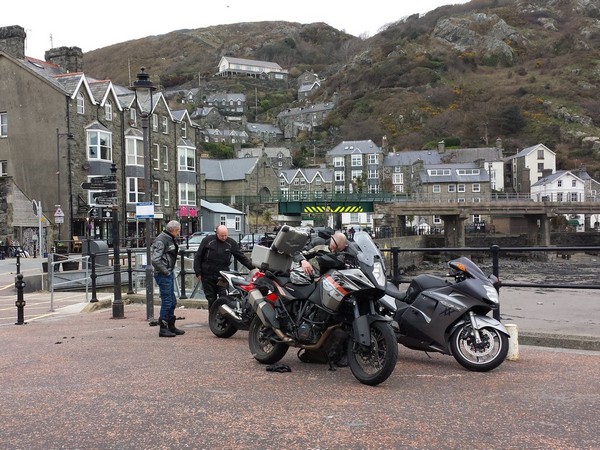 Barmouth was reached at 3:30 in the afternoon, the tide was out exposing mud glorious mud. Parking up the bikes on the Quay we made our way across the road for refreshment in The Davy Jones’ Locker Restaurant and Bar. It is a quaint small place but being out of season no problems were had finding a table, tea, coffee, coke and cakes were ordered and consumed. Now as a result of consuming liquid, it has to be dealt with somewhere, doing the usual thing, I ventured to find the conveniences, however not being able to spot the signs and not wishing to look like a tourist with no idea of where they are going, I decided to make a phone call to check in with the “arm in arm” and let her know I was still in the UK. I ventured back inside and sat back down. Leaving it for a sensible amount of time I decided to try again but this time ask the staff!, instructions were giver “over the road, turn right and it is in the building on the quay”….., must be the first place I have been to with “remote” toilets, probably since the New Inn at Hatton in the 70’s. By this time I looked across the estuary and the tide had come in!, only a matter of half an hour or so, potentially dangerous places these seaside towns!.

Bob must have decided he had experienced a good day as walking back to the bike he decided to practice his circus tumbles, there was a cry from behind and we turned to see Bob three quarters of the way through his triple salchow and gambolling across the pavement. After helping him back onto his feet, he dusted himself off and made like it was an everyday occurrence……….

The homeward trip was showing as 130 miles so, after the split from the Welsh party, the route was decided to be Welshpool, Shrewsbury, M54, M6 which proved to be an easy return journey. A long trip out but very enjoyable, made all the better by the weather, here’s to the next trip.