After all the rain and cold weather we have recently it was great to wake up on Saturday morning to see blue(ish) skies and to feel the warm(ish) breeze, today was going to a great day for getting out on the Yamaha FJR.

After a quick email conversation with Bob and other members of the ‘RigsVille Collective’ it transpired that only myself and Bob would be making an appearance today, so after deciding where to go and then where to meet up it was time to don my warm textile gear and get the FJR out.

After a few minutes of waiting and hoping that I wouldn’t bump into someone wearing an orange jumpsuit and a glint in their eye, Bob turned up and then the most important decision of the day took place, where to go for breakfast?

I said that as we were heading close to the Salt Box Cafe we should call in and partake in their famous Tattie Breakfast, Bob was a little hesitant as his previous visits to the box of saltiness had not been all that pleasant but he agreed that other fried pork establishments that we enjoy were a little far away for his grumbling tummy so off to the Salt Box Cafe we headed.

It was only as we passed Alrewas on the A513 that I remembered about this years The Motorbike Forum Challenge 100 and that there was a pub in Alrewas named The George & Dragon, one of the pub names that I needed to get a photo of my bike outside, so a quick diversion into Alrewas and the correct evidence photo was taken while Bob found somewhere safe for him to make a U-turn. Bob’s not very good at making U-turns, they are normally accompanied by the works ‘ohh shit’ and his bike having a little lie down in the road. 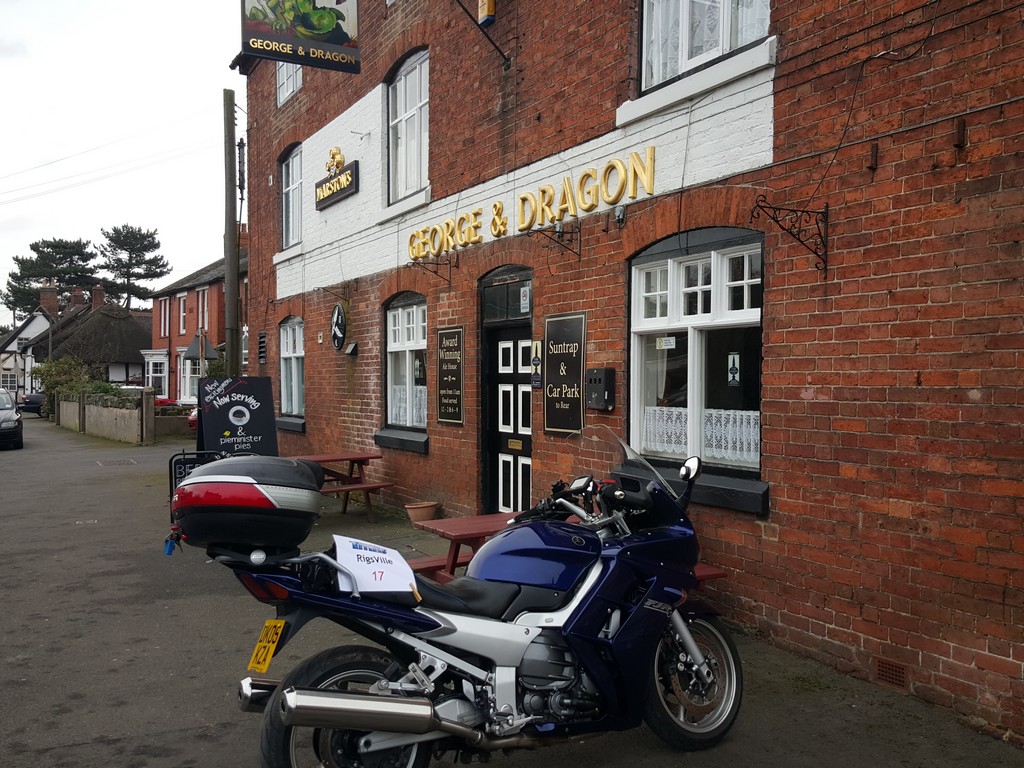 Once out of Alrewas, it was onto the A515 towards Draycott in the Clay and then as I saw a sign for Tutbury I had another recollection, Tutbury Castle was also another location for this year’s TMBF Challenge 100, so another quick diversion into Tutbury to get another photograph.

Thankfully this wasn’t that much of a diversion as Tutbury is very close to Hatton, the location of the previously mentioned Salt Box Cafe. 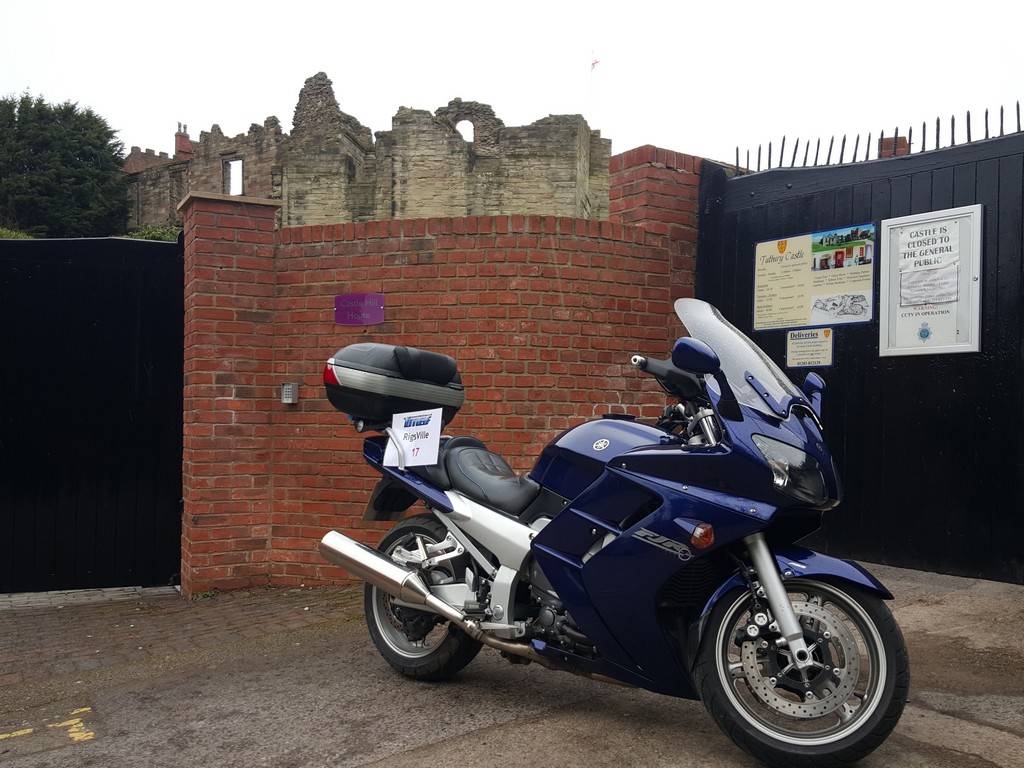 Upon arriving that the Salt Box Cafe I noticed just a few drops of rain starting to fall, little did I know that this was the start of a very wet day!

Once inside our food was ordered and me and Bob set about putting the world to rights in anticipation of our Tattie Breakfasts, number 82 was called (we were 83) and then 84 and then a few minutes later numbers 85 and 86 were called, then 87, 88, 89 and 90 but still no 83, we were thinking that maybe it was taking them longer due to having to fry the lovely tatties for our breakfast, then 91, still no food, 92, 93, 94 and 95 all were called and still no food for us, after going and having a chat with the staff to find out where our food was, it transpired that they had missed the order, when the order was placed the corresponding ticket that goes into the kitchen had mistakenly been put on the ‘done’ pile – thankfully they quickly cooked us our Tattie breakfast.
While we had been waiting the 40 minutes for our food, we have been discussing where to go in the Peak District and with the aid of the great book Bikers’ Britain by Simon Weir we had decided to use one of the routes mentioned. 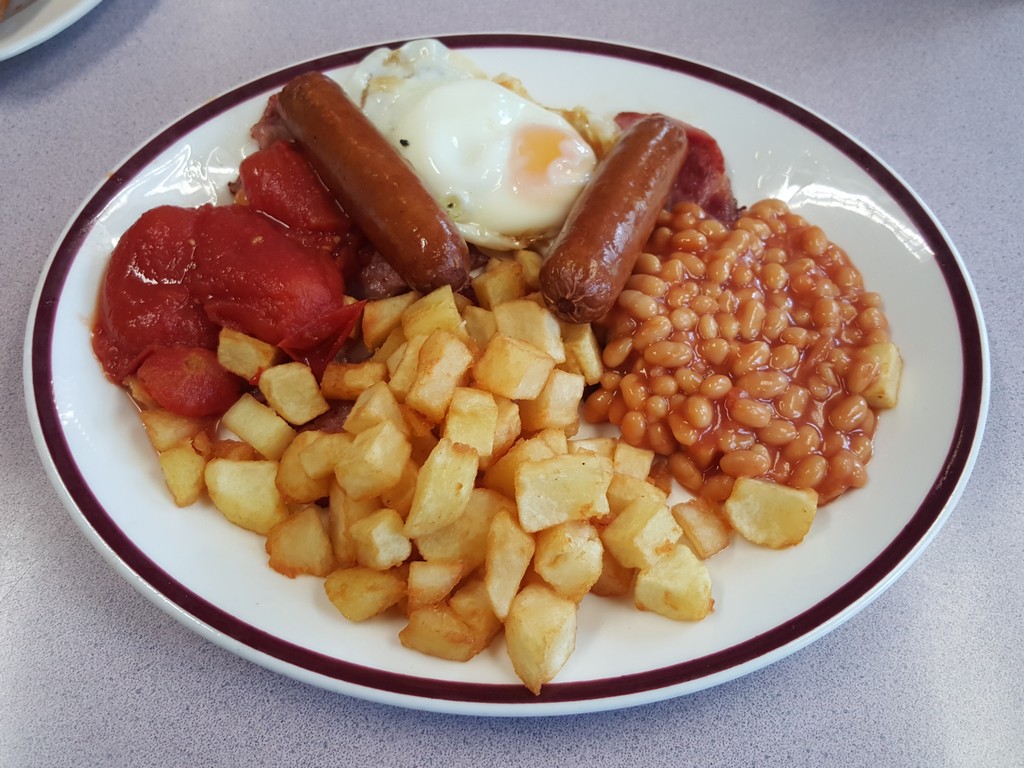 Once outside, we noticed that the rain had started to get a little more, err, wetter but decided to continue anyway so it was a quick run onto the A50 and then onto the A515 into Ashbourne to get to the start of the route, it was in Ashbourne that I asked Bob if he wanted to continue as the weather was getting worse now and Bob was just wearing his leathers and had no waterproofs, Bob still wanted to continue so it was through Ashbourne and then onto one of my favourite roads in the area, the B5056 from Fenny Bentley, past Longcliffe and up to the T junction with the A5012. Here you can turn right onto the infamous Via Gellia to Matlock Bath but we continued straight on, staying on the B5056 until we met the A6 and then turned right into Bakewell for a quick fuel stop.

Once Bob’s R1200RS had been refuelled we headed out of Bakewell on the A6 and turned right through Ashford in the Water and onto the B6465 with a brief stop to admire the view at Monsal Head.

At the end of the B6465 we turned left onto the A623 and then this is where things went slightly wrong, following the GPS (still not learned) we turned onto a side road towards Little Hucklow and then proceeded to follow some steep, tight roads until we arrived at Castleton, the roads and views I presume would have been very nice except for the fact that the wind and the rain were making visibility very challenging. 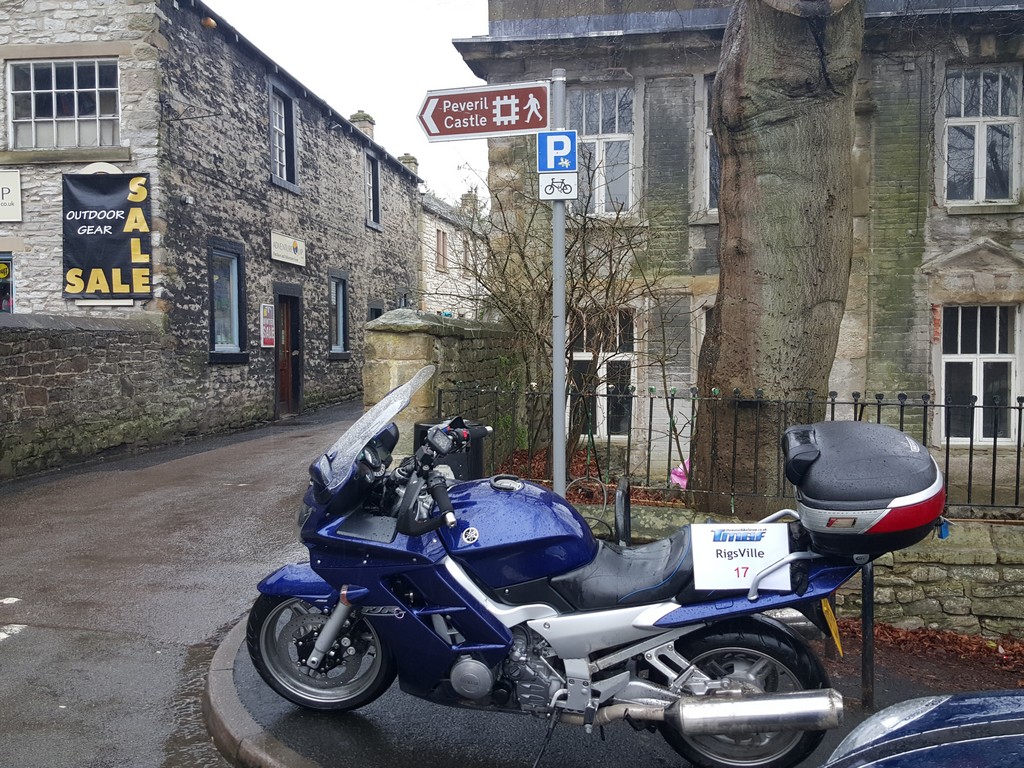 I must say that this road isn’t part of the Bikers Britain book, I had added in Peveril Castle to the existing route as it was another location to grab a picture of but my GPS had in its wisdom decided that this back road route was much better than the more obvious and simple route of using the B6049.

Once we had eventually arrived in Castleton the weather was now very poor so a quick photo was taken and we decided to ‘give it bollocks’ and head home.

So we headed through Hathersage and into Chesterfield and then onto the M1 towards home, ironically the closer we got to home the better the weather became drier and warmer, blooming typical! 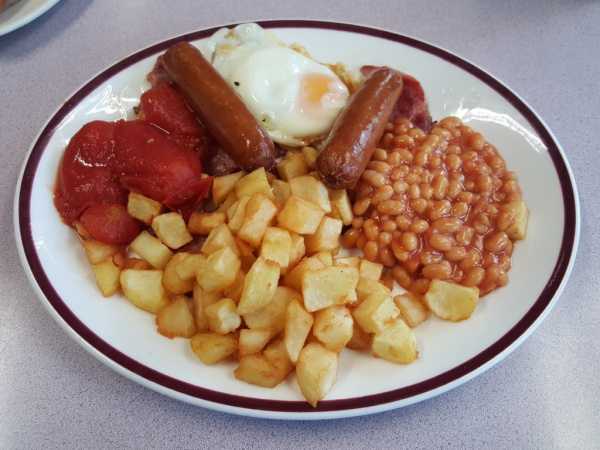 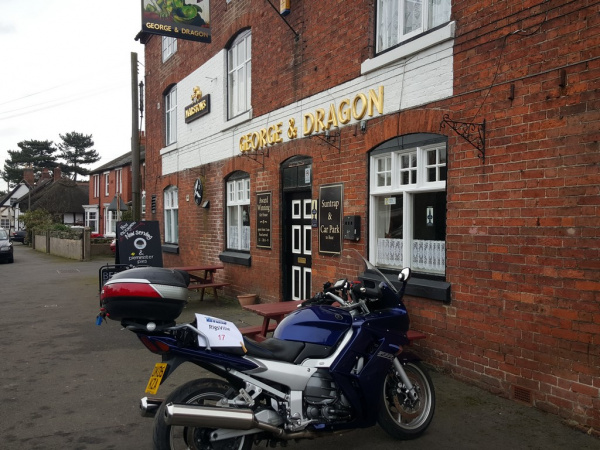 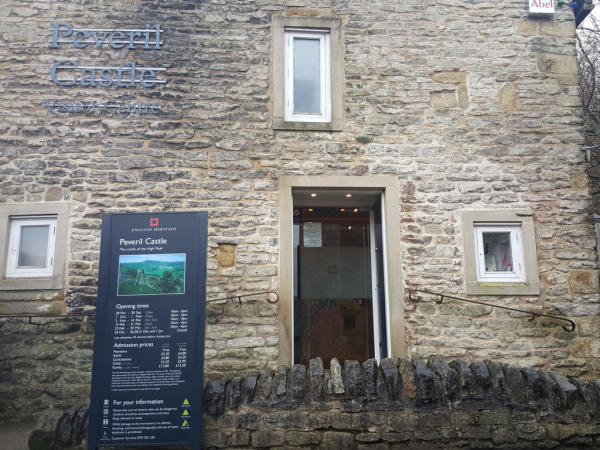 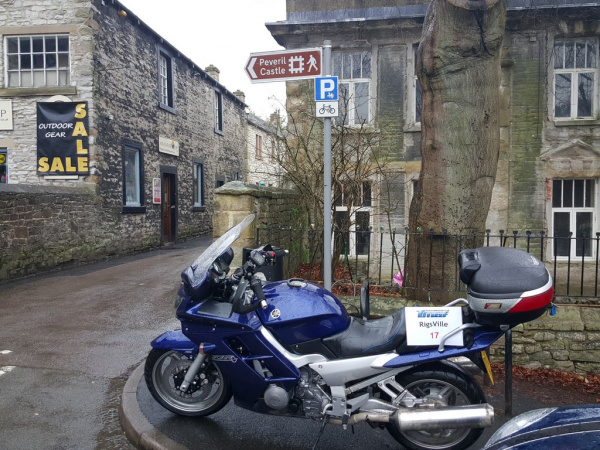 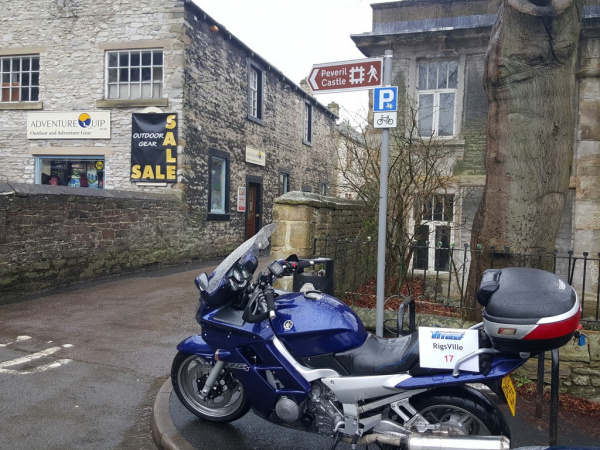 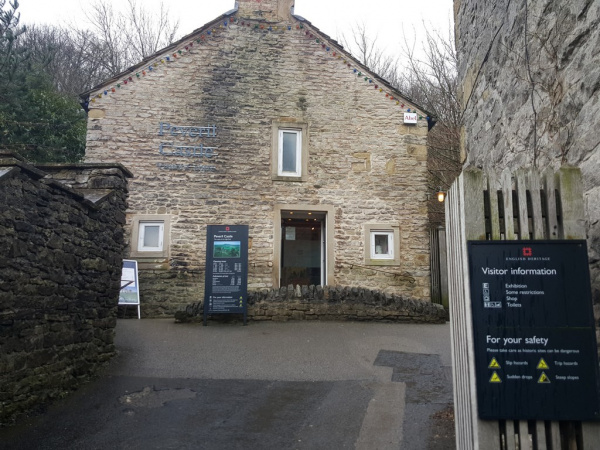 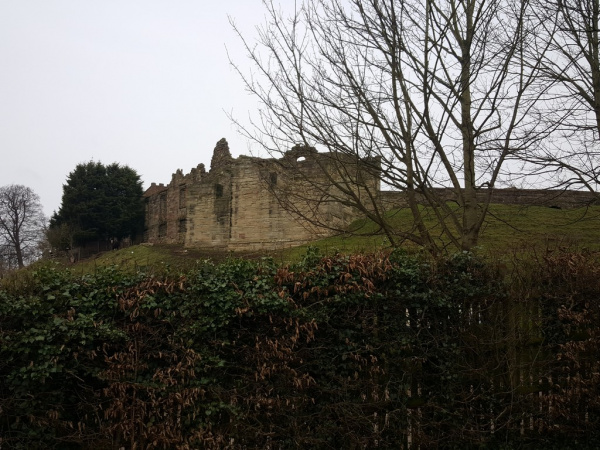 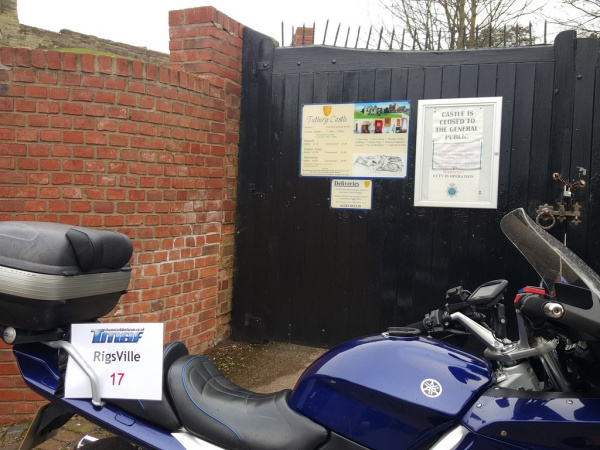 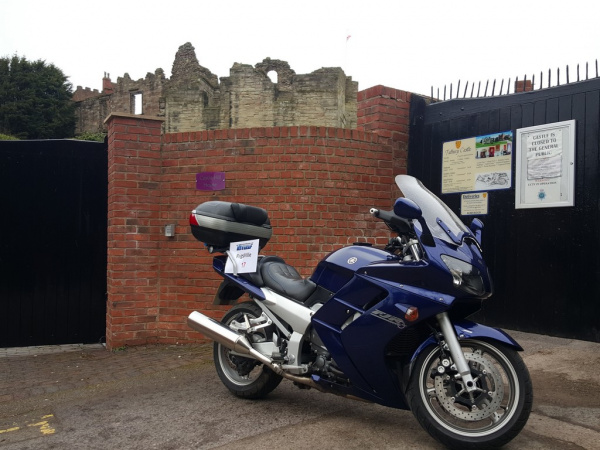 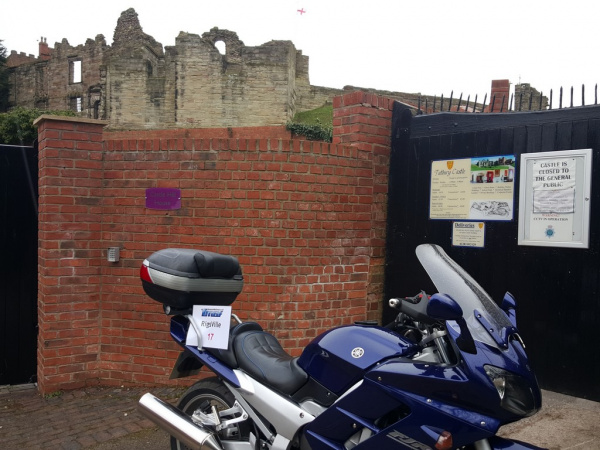