Homeward bound on the M6 it was blacker than black over Bill’s mothers, you just knew that the waterproofs were in for a severe testing, the road was dry at the time and tootling along at the regulation 70 MPH was going to eat the miles up easily, however the weather had other ideas, up ahead and just over the crest of a slight incline I could see the car brake lights coming on, a sure sign that the black clouds were depositing their contents onto the road. Sure enough the road was awash, luckily the shower had nearly passed so it wasn’t falling from the sky too badly. Phew, that was lucky, the blinding spray only lasted for a few miles and the road was good to go.

Accelerating back up to the legal limit saw a few more miles tick off the sat-nav countdown. This tranquillity wasn’t to last, it was not long until the heavens opened again, this time I could feel the water filling up my lower regions, I should say topping up the lower regions as they had been wet all day, this time though I could feel it settling at the lowest point and running down into my boots, lovely jubbly.

The day had not started well, I had got the bike out and fixed the sat-nav into position, brought up the day’s route only to discover that it had not transferred over from the computer to the sat-nav and I only had the old plan which did not have the meeting point on it, dam and blast, that is what comes of rushing and not checking it as per the normal routine. Out with the phone to find the postcode of the McDonald’s meetup. It gave me a DE postcode which seemed wrong but I entered it in and set off.

I had totally misjudged the weather, I could have done with another shirt and also some waterproof gloves, I had picked up my Texport summer gloves and when I realised, decided that the weather forecasters would be right and it would warm up and, as the rain was moving south, the day would mostly be dry.

I headed up the Fosse way to what I thought was the correct meet place, I had not saved Rig’s e-mail with the location and with my memory not being what it once was headed to the A5/M42 junction, the sat-nav was telling me different and I should have followed it but I knew best.

I arrived at the service area just before 8am but there was no McDonalds in sight, who the bloody hell had moved that?, out with the phone to check what the sat-nav had been telling me all morning, bugger, the technology was right as always so off I set up the M42 to the next junction where Rig was duly waiting just finishing his coffee. Not much time for greetings as I caused a slight delay in the days proceedings. 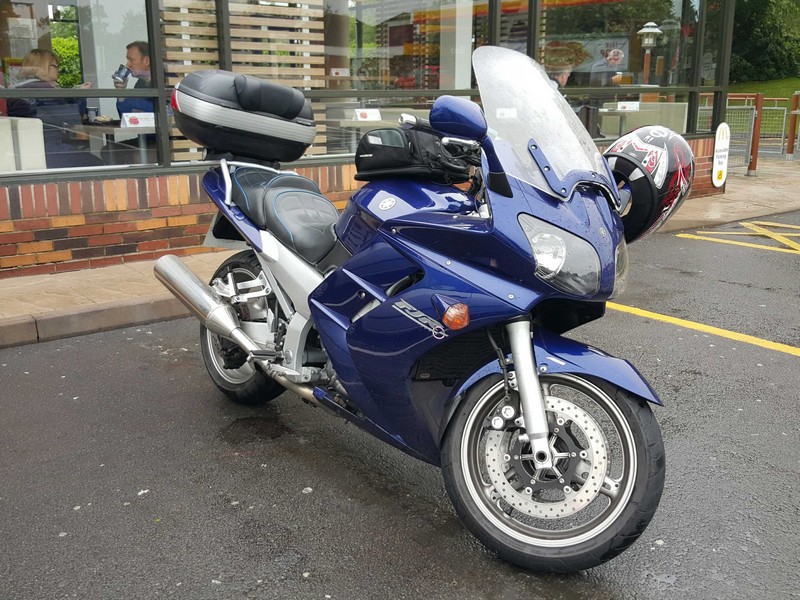 First stop on the plan was breakfast at Grindleford Station Cafe, Rig knew the scenic route so led off, and this turned out to be an excellent set of roads, full marks for the first part of the day, road wise at least. The weather was a different matter, the rain was persistent but not heavy, just the day, on an unprotected bike, that you get wet without realising it.

Today was the first time that I had seen Rig’s new wheels in the flesh and they looked good, effortless cruising and the Yamaha FJR took all in front of it in a very professional manner, top looking tourer, good colour too, the blue paint job certainly suits the style of bike, high marks to Yamaha in the visual stakes.

Grindleford Station Cafe came up in good time and with the first photographs of the day secured it was inside to order the full English breakfast. My first job was to trot off to the little boy’s room where I discovered just how damp the weather was. The falling rising damp had worked its way into the waterproofs and my shirts were wet, also my skids were wet too, bollox it was going to be a damp ol’ day. 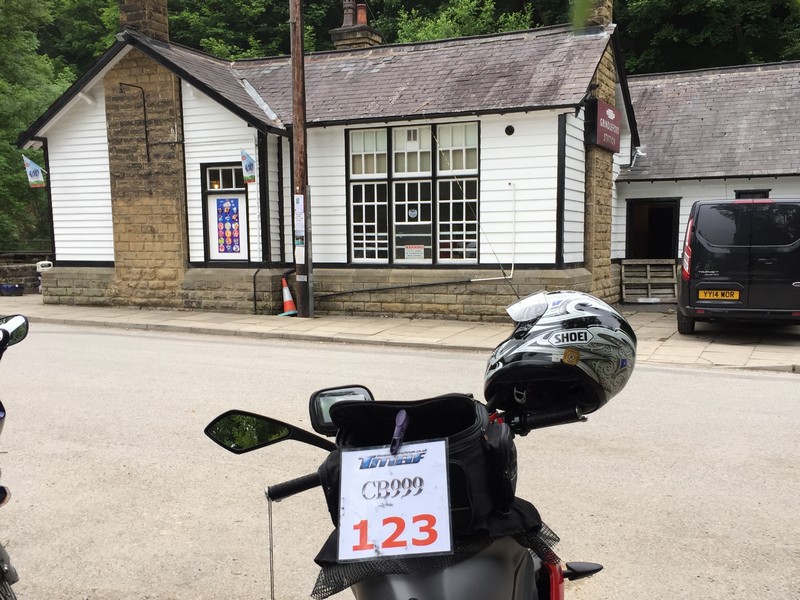 The breakfast at Grindleford is very nice, not too large so you don’t leave there feeling like Mr blobby, the tea was a bit on the milky side for me but that is only personal preference.

Back outside, Rig manoeuvred his ride into a better position and grabbed his photographs and it was off on the short trip to Blue John Cavern a bit further into the lovely peak district. This tag was also a cafe, just outside of the entrance to the cavern sits a quaint looking cafe, a quick photo stop and then it was time to set the sat-nav with the next postcode and a trip across the high peaks towards Manchester. 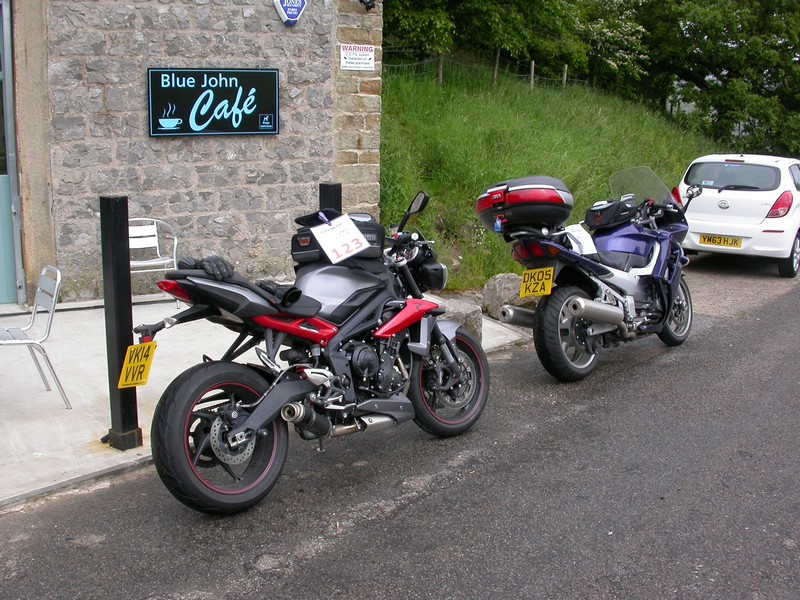 The initial part of this leg was shrouded in mist which made progress a bit on the slow and cautious side, with a drop in altitude the mist gave way to steady drizzle which was to be with us for most of the day. The trip through Manchester and into Salford was busy, Saturday traffic in any major city is always ever present and with the wet roads caution was the better part of valour, however it did seem that every time I went through a traffic light they changed from Green, or was that amber?, to red and a few times Rig got caught at the lights which made for a stuttering trip in parts. 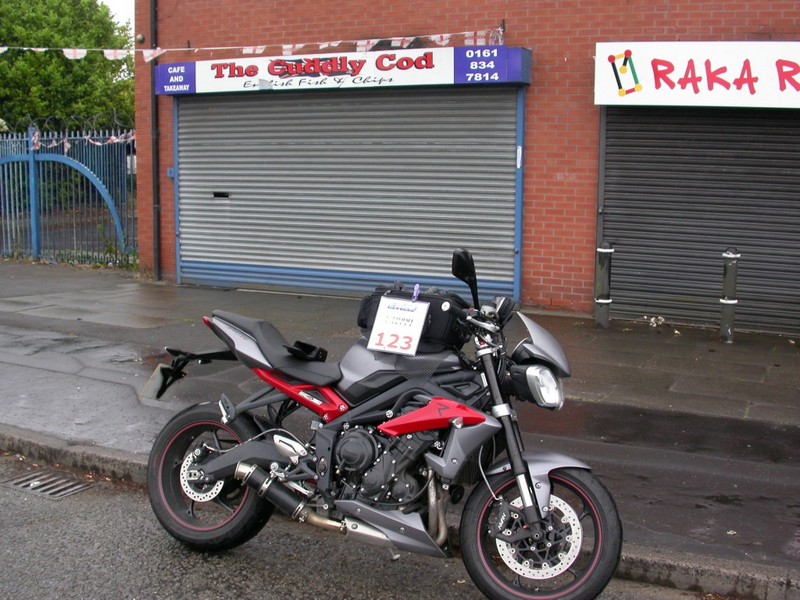 The Cuddly Cod fish and chip shop was the target and once again the sat-nav proved its worth and delivered us to the front door after a few twists and turns through the back streets. Unusually for a Saturday lunchtime the place was shut and shuttered up, perhaps Mancunians don’t eat fish and chips for lunch? Photos taken the next postcode was sorted, this was a trip to St Helens deep into Rugby League country and Millenium motorcycles in Thatto Heath, this was a large dealership tucked away near the station, Rig had spotted the sign which was a good job as I hadn’t so had no idea where to go. The dealership sold at least half a dozen makes of bikes so we had a wander round especially the Yamaha section where Rig could compare his FJR with the later models on display.

The obligatory cafe was situated upstairs so we took the opportunity to sample a cup of rosy and a nice gooey cherry muffin. 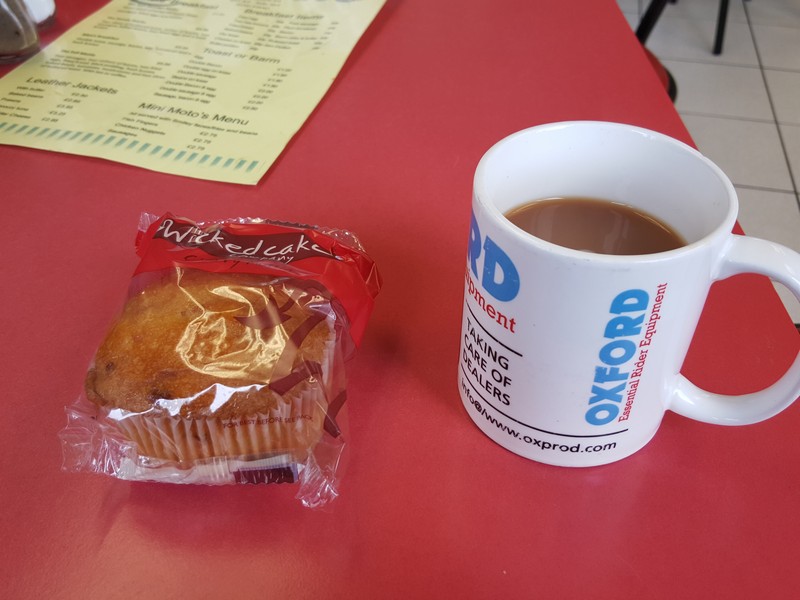 Suitably refreshed it was off to the last stop of the day, this was supposed to be the famous straw sculpture at Snugburys Ice Cream in Nantwich, however they have not created one for this year so a photo of the shop had to suffice. 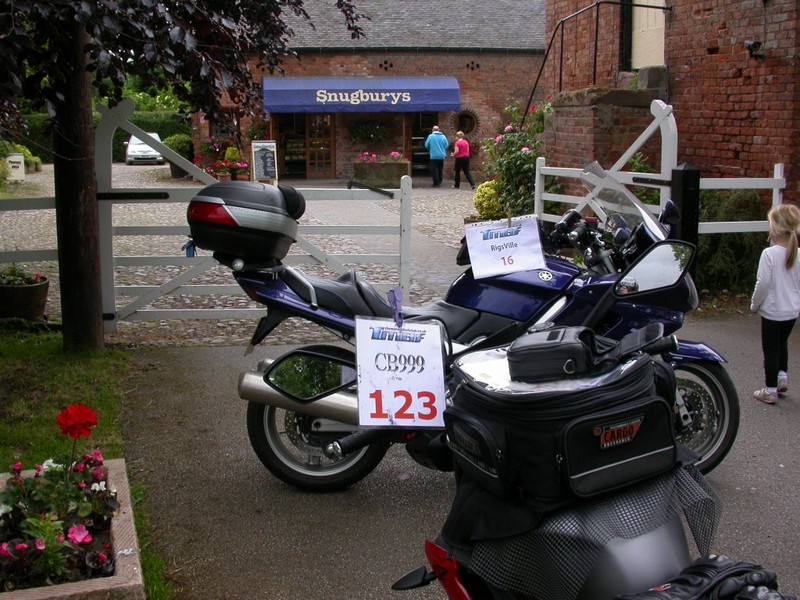 A thoroughly enjoyable day despite the best efforts of the great British weather, a visit to parts of the country that would otherwise pass you by and all thanks to the Motorbike Forum Challenge 100, what better excuse to get the wheels out of the garage and use them for what god intended.