This rambling is my own personal view on the KTM 1290R Superduke and should be taken in that context. First impressions, visually stunning, I prefer the black version but KTM will always produce an orange motorcycle. Of course the looks are purely subjective; if you like race reps then the RC8R will be more to your liking, the looks of which cannot be argued against. The machine feels light and nicely balanced to push around, the lack of grab handles made this slightly awkward but adopting a RC8 method of pushing on the seat whilst pulling the bars works a treat, just one of those things you soon get used to.

The only other Duke family of bikes I had sat on was a 390 so this was a new experience, I can only liken it to getting out of your car, where you look over a bonnet, and into a Bedford Rascal van, there appears to be nothing in front of you, looking ahead blanks out any view of the bike except for the mirrors. The seat pushes you forward into the tank and the footrest position cements you in. Sounds uncomfortable but it isn’t. Once on the move and a couple of miles under the tyres the riding position seemed natural enough and comfortable. 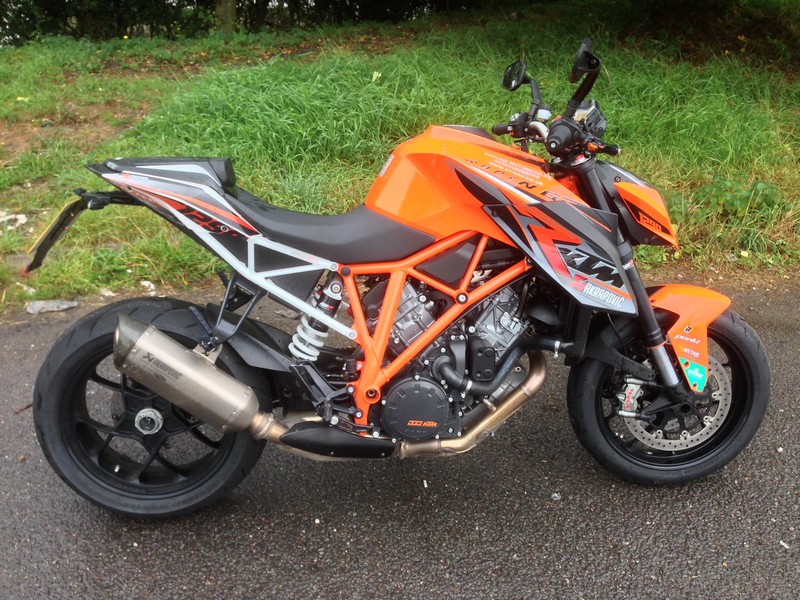 As you seem to be sat on top of the front wheel, the clocks are a positive downward glance so I found myself relying on my senses to gauge speed etc., this was tricky to start with as every time I looked down to check I was going slower than I thought, this was soon sorted as I recalibrated from sitting behind a screen to riding a fully naked machine and the speed went upwards.

All the controls on the bike were in a good position and being used to the KTM computer system I had no problems changing settings. The clutch was heavy but this could be one of several reasons: Bike specific, model specific, the short after marked levers fitted…. whichever you attribute this too there was no problem all it took was a bigger squeeze…. Job sorted. 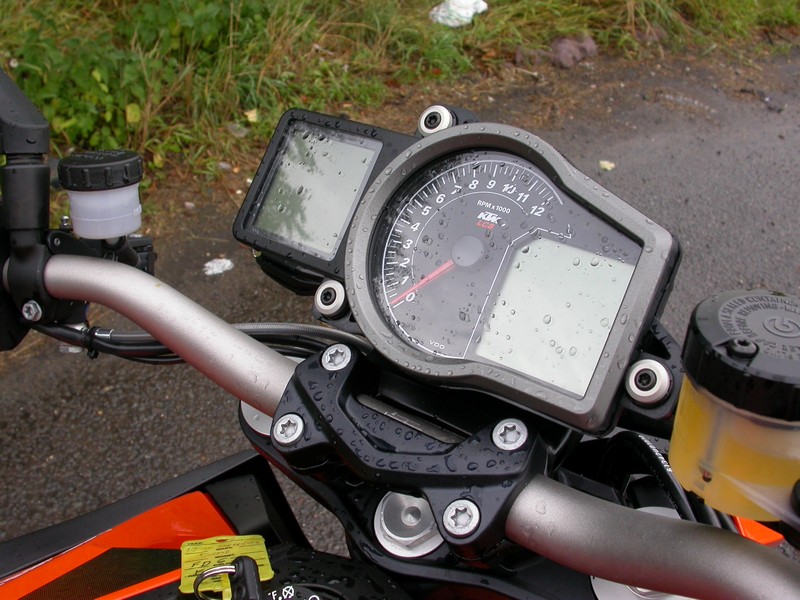 With the rain pelting down I thought it might be best to take the bike out of sports mode and set it to street, I did consider the rain mode but thought better of it. So I was now ready to set off, did I do all the sensible things…. Adjust the mirrors, check the lights, familiarise myself with the position of all the switches???, did I buggery, after sitting on the bike for a few seconds all I thought about was prodding the starter and getting the Akrapovic into action, the bike was fitted with the slip on and not the full system and had the db killer inserted, the sound was nice and deep, not overly loud but loud enough to announce its presence. Off I set out of Loughborough and onwards to Melton Mowbray, this is my normal route when visiting Redline Motorcycles as I am partial to a Dickinson & Morris Pork Pie from “Ye Olde Pork Pie Shoppe”.

It only took a couple of miles to get accustomed to the bike, such was the ease of riding it with everything in the right place, the engine had no problems as low speed and was as smooth as you can expect from a 1300cc V twin. Once outside of the town constraints the bike pinged along as fast or slow as you fancy, the handling is sublime, I am by no means an expert and soon got used to sitting “up front” as it were, and letting the bike do the work, even though it was pissing it down the lines the bike decided to take were the best ones and no hesitation or drift was felt so the trousers were never in danger of being stained!. 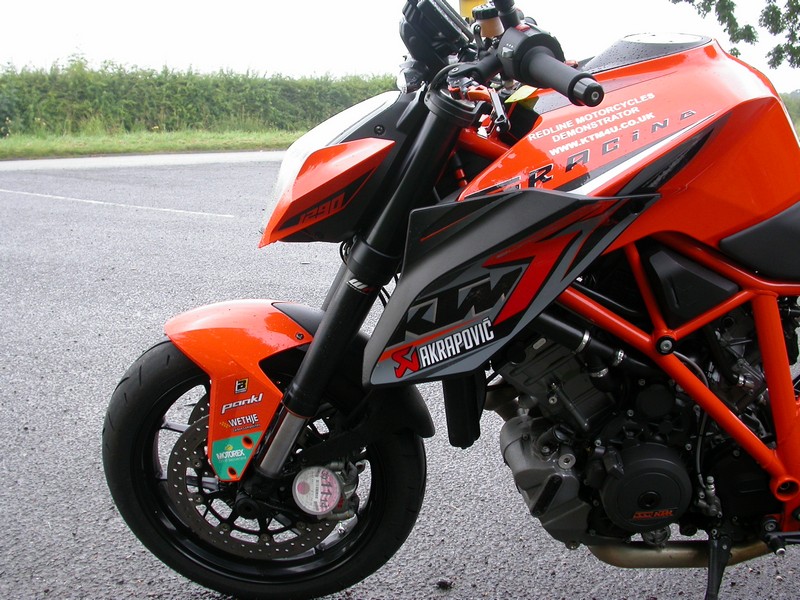 Melton was reached in what seemed a short time so I parked up and wandered off to the shops, pork pie purchased and after a tea and cake stop I got back to the bike and changed the riding mode from street to sport for the trip back. The change of mode brought a change of bike, I thought the response was excellent before but in sport mode it was stepped up a gear, instant and linear just as you would want when there is all this power to play with. I was feeling fully at home on the bike by now and had full confidence in the machine, overtaking was effortless, handling to my abilities was perfect, the Dunlop tyres I liked, no problem with them at all.

I liken riding a modern bike to using Microsoft Office, It doesn’t matter how clever I think I am, with my abilities I am only scratching the surface of what is available and so it is with this bike. Personally I love all bikes and I love riding them, I can’t say that I have ever ridden one and thought “that’s crap” they all have their pluses and minuses and most of the time when I read a professional review always wonder whether I would be able to notice any problems that they find.

Down to the bottom line, would I buy one?… Yes, could I justify the outlay required for one of these beasts?…… probably not, could I justify trading in my current bike?… No it does everything I need it to do excellently, it’s not without its little foibles but these make bikes what they are.