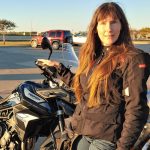 Hi, I’m Butterfly. I took my MSF class in 2013 and a few months later bought my first bike, a Harley-Davidson Sportster SuperLow 1200T. A few years later I traded the Sportster in for a Harley-Davidson Road King. Finally, in 2017 settled on my BMW F700GS with factory-lowered suspension.

I have ridden solo from Texas to British Columbia. Ridden the often foggy and mystical Blue Ridge Parkway of course conquering the Tail of the Dragon on the way. The magnificent PCH from Washington to California hit the famous roads in the Black Hills of South Dakota during Bike Week.& Survived the Devil’s Highway in Arizona (a few times) and submitted a Colorado “fourteener,” Pikes Peak…to name a few.

This page is to share my love of travelling by motorcycle, my experiences, explorations and maps with you.