So with the unexpected demise of Fiona, my Kawasaki Versys 1000 I needed a replacement bike, I was very tempted to go and get another Versys 1000 as I was really enjoying owning and riding the big green machine but also I had always wanted a Triumph Tiger and this seemed the ideal time to scratch that itch. I’ve always liked all of the Triumph Tiger range, from the 800 to the 1050 and 1200 but managed to narrow it down to the 800 or 1200 (OK it’s 1215cc, but let’s not get picky) so while I recovering from my injuries I was browsing the Internet looking for potential new bikes, even making a very sexy Excel spreadsheet with all the possible replacement candidates until I spotted a very nice looking Explorer 1200 that was the right colour, year, mileage, accessories and price. So after a quick phone call to arrange to view the bike I ended up being the new owner of a Triumph Tiger Explorer 1200 that my children named Dora. 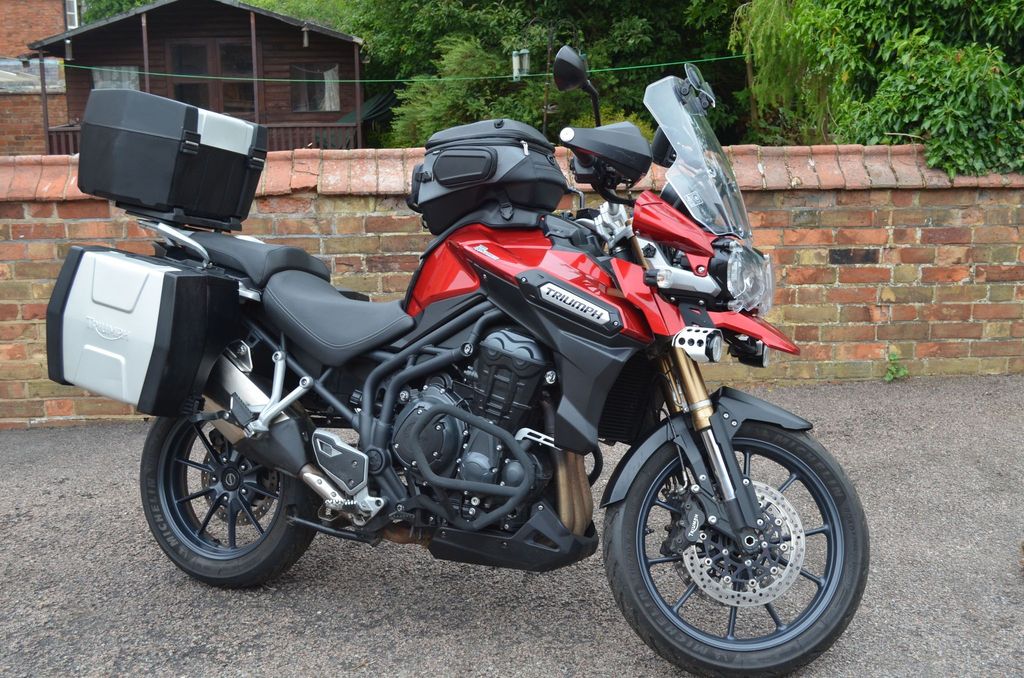 While I’ve not been able to ride the bike much due to my injuries, I did really enjoy the short 30-minute ride home plus a couple of 20-minute rides around local roads and I’m very happy with the new bike, it feels so much like my BMW R1200GS that I had a year ago, which is no surprise really as this is Triumph’s answer to BMW’s GS but being a 1215cc inline-triple engine it carries its weight much higher than the BMW, but that’s only really noticeable when moving the bike around the garage or driveway. 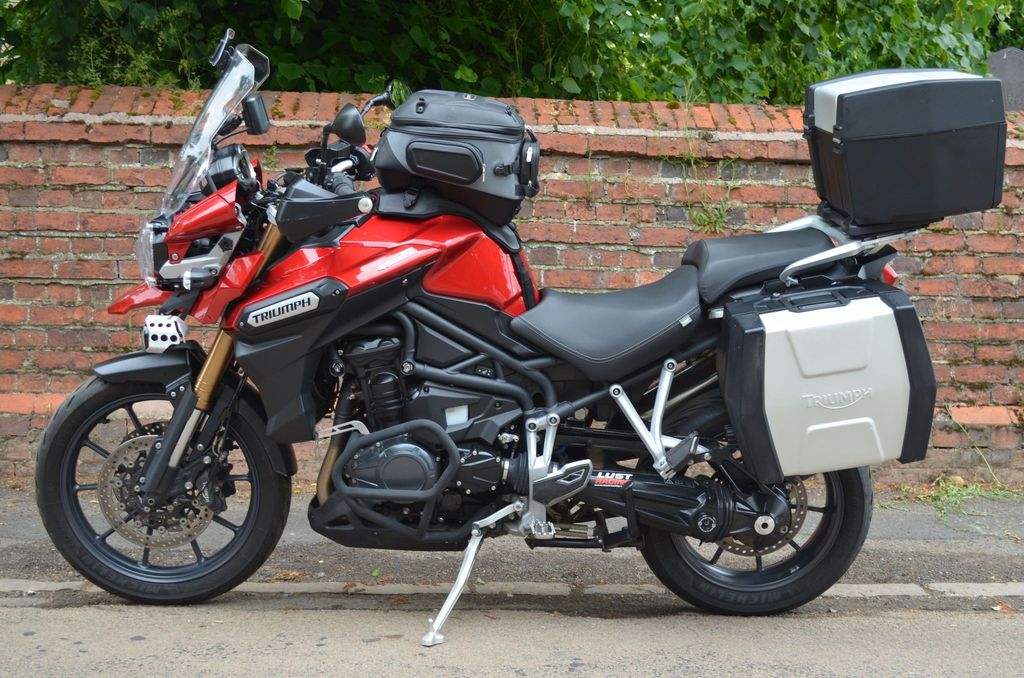 We are currently having some great weather in the UK, which is typical as I’m not recovered enough to really get out on the Triumph, only managing short rides before my injuries are too painful to continue but you can guarantee that by the time I’m fully recovered it will probably be snowing…

Seeing as I can’t ride Dora, I’ve been spending time and money on the Internet buying things, one of the first things was a set of 20mm bar risers from Moto-CNC. The fitting was very easy and the actual bar risers look very well made, I was just disappointed with the longer bolts they provide, they were very cheap, zinc plated ones and for a product of this quality I was expecting stainless steel bolts. 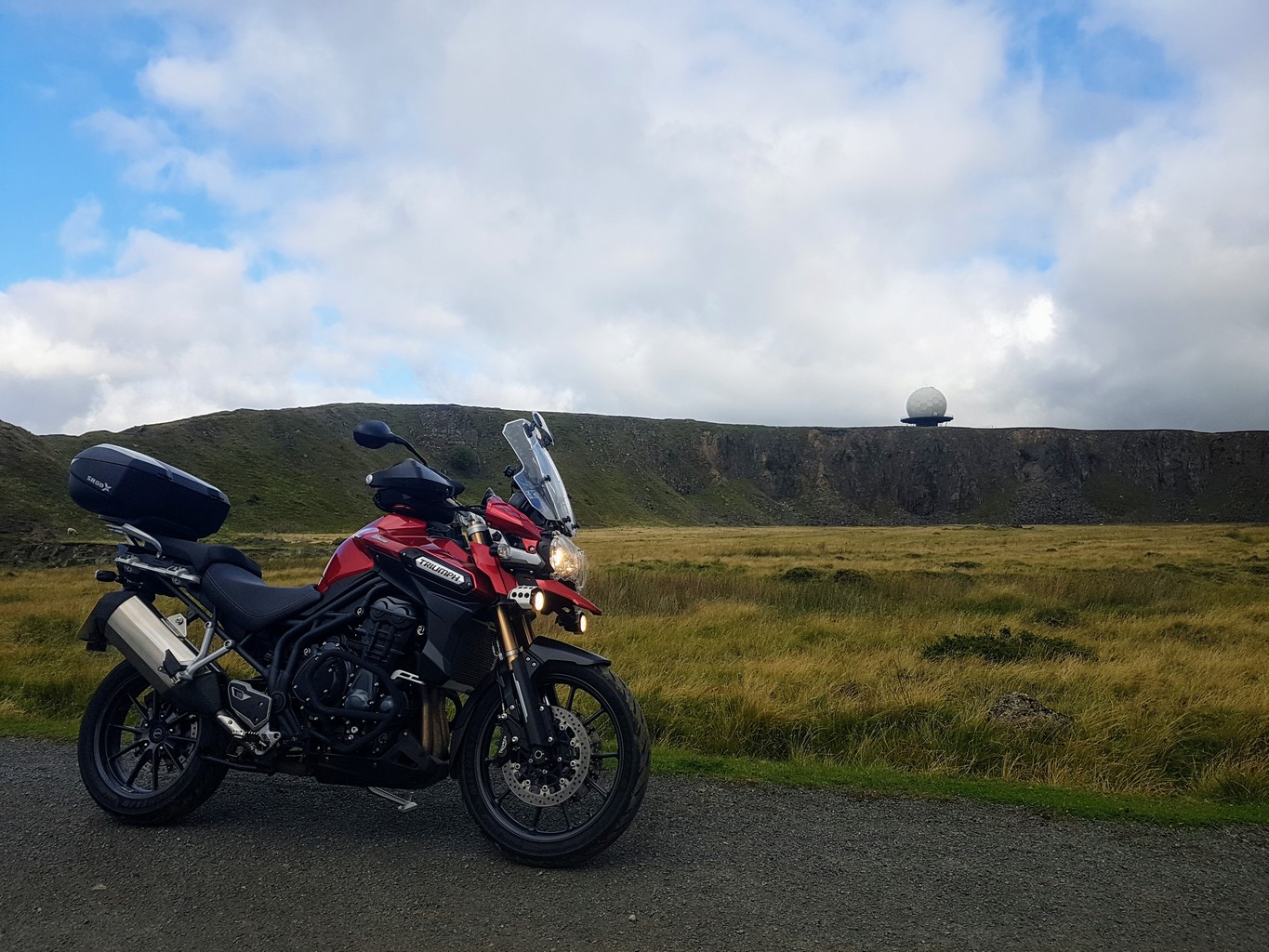 Having removed the Triumph panniers and their mounts as it made the bike too wide for me to comfortably ride my focus was then on the Triumph top box, while it’s a good (not great) looking top box, it has a reverse tardis effect, as being unable to take much kit inside despite its large exterior so I started looking at a replacement top case. Usually, I would have gone straight for a trusty Givi top case as I have done many times in the past, but one of the things that I always hated was that the large top cases always looked, erm, large! then I saw a YouTube video on a top case from a company SHAD and their expandable SH59x/SH58x top case that allows you to expand or collapse the top case into 3 different sizes, so after loads more Internet-based research I ordered a SHAD SH59x from www.bikeluggage.co.uk late on a Sunday evening and it arrived early on Tuesday! 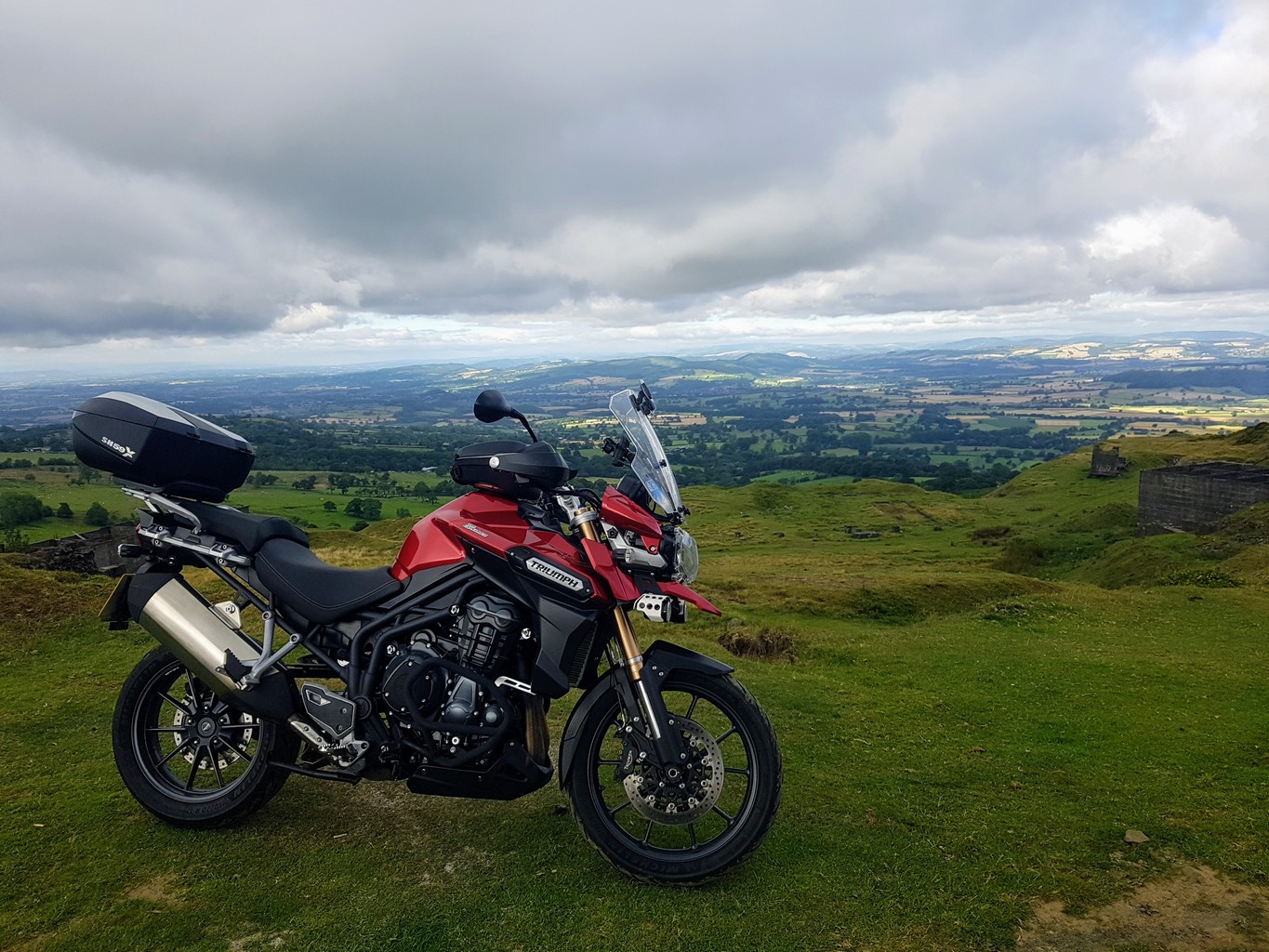 One of my worries, when I was thinking about buying another Triumph, is the very poor service and high cost associated with their dealers and servicing, now I know that my last Triumph was over 15 years ago and that things change but once bitten, twice shy (OK I was bitten more than once by crappy Triumph dealers) I was still a little concerned about moving back to the brand.

One of the things I learnt when I had Betty the BMW was that you get far better service and often pay less by using an independent BMW specialist such as Mikey Boy at Overland and Classic Motorcycles near Melton Mowbray, so I started looking for the Triumph equivalent and one name kept coming up over and over…Just who is MuddySump?

It turns out that there is a gent named David who goes by the name of MuddySump and he is a Triumph trained, independent, mobile mechanic who not only specialises in Triumphs but also, as he’s mobile, he comes to you!

I sent a message to David via his Facebook Page (https://www.facebook.com/MuddySump/) and a few days later he replied, I was beginning to think it was a dead-end after not hearing anything back from his, but it turns out that David spends up to 2 weeks at a time away from home, travelling all over the UK servicing bikes and as such his time is very limited but he responds to his messages and emails when he gets home.

To cut a long story short, I arranged for David to come and do a 10K service on Dora, which he did and I’m extremely happy with the quality of his work and the price was very reasonable.

Having 3rd gear to neutral issues

One complaint you might hear about with the Tiger Explorer 1200 is an intermittent problem when you are changing down from 3rd gear into 2nd you hit neutral instead of going into 2nd gear, not a false neutral but ‘neutral’ neutral, now if you speak to some Triumph dealers or even Triumph themselves they claim to have never heard of the issue (see what I mean about Triumph Dealers?) yet the Internet forums are full of people having the same issue. In some cases, Triumph has fixed the issue under warranty and in others, they have stuck their head in the sand. This is not unusual for Triumph with the similar issue being found on recent Triumph Bonneville’s (Link to Stuart Fillingham excellent YouTube video) Now as you might have guessed Dora was also experiencing the same problem, so I fired off a few emails to a few Triumph dealers near me and got no reply (Great customer service!) luckily I spoke to David at MuddySump, and he looked into the issue and came back to me with a parts list and price to install the updated gear selector (strange that Triumph has an upgraded gear selector part but say there no issue with the gear selector….) anyway, David fitted the upgraded gear selector, and since then the bike has performed flawlessly.

When I arrived home I quickly sent an email complete with photos and a YouTube video to www.bikeluggage.co.uk explaining my problem and they have replied that they have sent my comments and video onto SHAD’s warranty department and they will get back once they hear something. 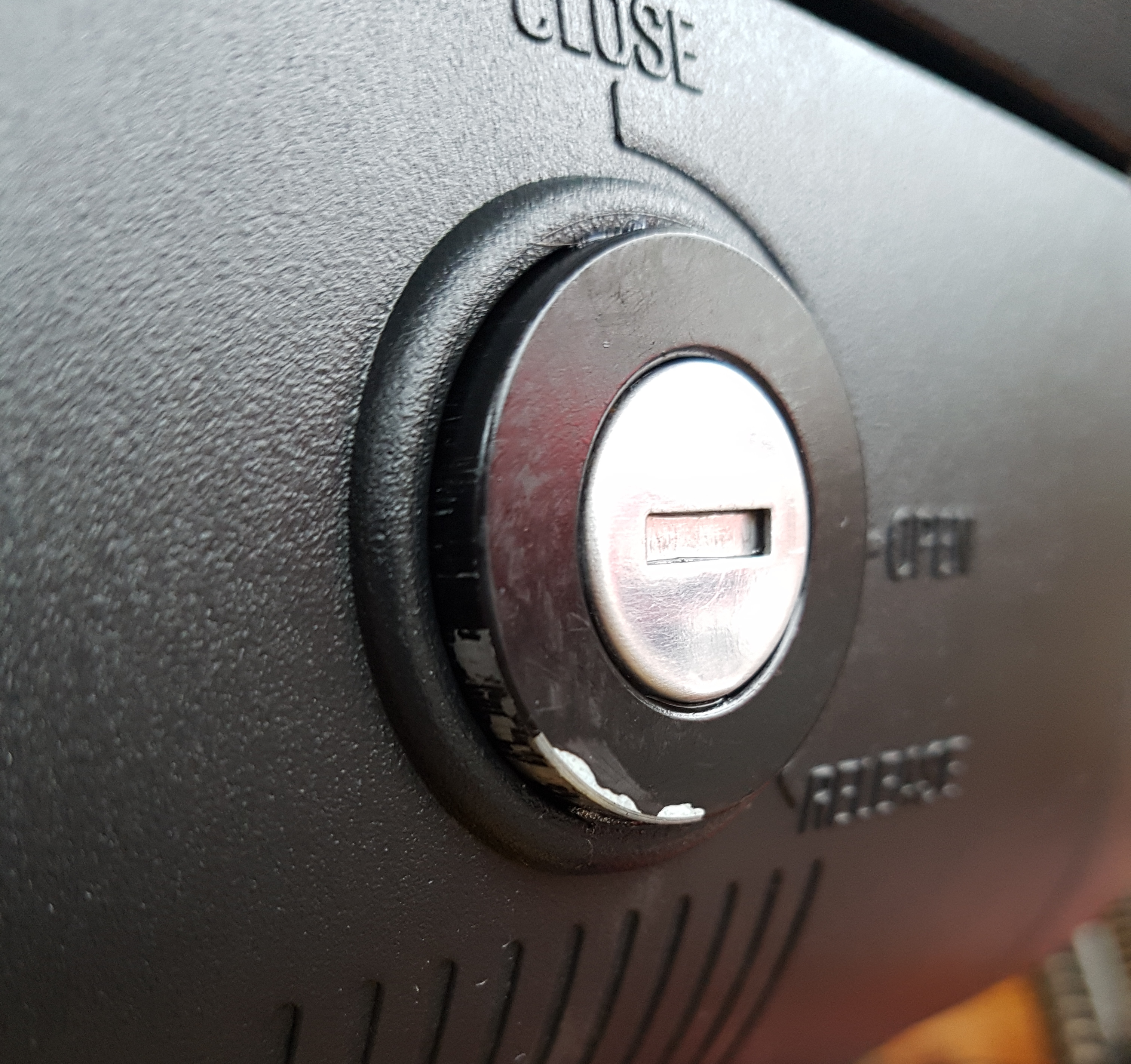