After reading about the lads at JangleJangle going to Sherwood Forest and playing at being Robin Hood we decided to have a little ride over that way as Bob wanted to audition for the role of the evil sheriff of Nottingham. 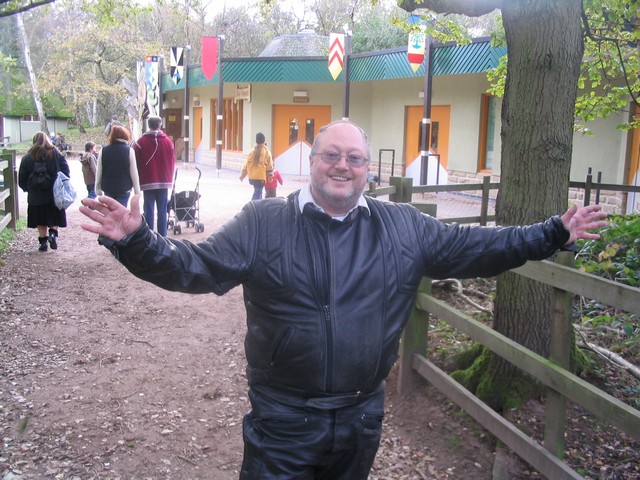 As with most of our trips the day starts with a excellent breakfast and today was no exception as we decided to call into the Salt Box Cafe near Derby. A quick run up the A515 and after finding a table as the place was packed as a bunch of guys and gals from the Christian Motorcyclists Association had also stopped here for a break while on one of their runs. so in all things being good and holy Bob demolished a Tattie Breakfast while I prayed for his soul.

After being suitably fed and watered we headed back onto the A515 into Ashbourne and then onto the A517 towards Belper. Once at Belper we went through Heage to get onto the A38 which we took north until we crossed the M1 then carried on the A38 to Mansfield, from there is was just a short ride to Edwinstowe and the Sherwood Forest Visitor Centre. (note that if you visit in a car then there is a £3 parking charge but if your on a bike it’s free!)

After playing dodge the leaf litter in the car park we parked the bikes and had a stroll around the visitor centre, which is quite a large area consisting of toilets, exhibition hall complete with the obligatory shop, restaurant and other bits and pieces. Once we had walked around the exhibition, played sword fights with wooden swords in the gift show and nearly getting thrown out (Bob’s fault as he cried when I hit him over the head with a rubber pike) we decided to go and find this big tree that everyone seems to talk about (Major Oak) Unfortunately after walking 100 yards we came across a sign telling us it was a 20 minute walk and Bob was unable to walk that far due to his gammy leg, bone in his arm and ingrowing toe nail so we decided the best direction wasn’t into the forest but the restaurant instead.

For the trip home due to the darkening skies we decided on a quick return so we jumped onto the M1/M42 and headed south.

Sorry for the quality of the pictures, Bob had forgotten the memory card for his camera and mine was playing up.