Where shall I start?, well there were supposed to be four of us to go on this trip up to Scotland as a finale to completing the British National Parks Challenge but unfortunately Chinny dropped out because he couldn’t get the time off from work… Bugger!

At the very last minute Rig could not go due to someone being ill in his office and he could not leave them without IT cover! Double Bugger!

So we are down to two, just myself and Bonzo. 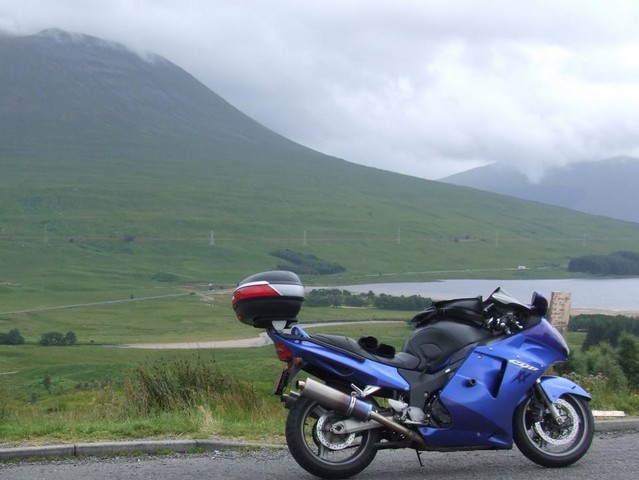 We were planning on leaving on Monday morning but now there were only two of us so I rang Bonzo we decided to go on the Sunday so he came up from Cardiff on Saturday afternoon ready for an early morning start.

Sunday morning 6.40am and we leave and head towards Coleshill and jumped on the M6 through spaghetti junction and head north, the roads were a bit boring but quite quiet and a quick way to Scotland. After the first 100 miles we stop for breakfast at a robbery station (Motorway Services) and paid £17.50 for two breakfasts! (robbing barstewards) but once our bellies were full we set off again along the M6 and eventually turned off onto the A75 towards Dumfries.

We eventually stop to fill up with petrol just before Dumfries and then take the A76 towards Kilmarnock where we next jumped on to the M77 to Glasgow and then turned off at junction 3 to Paisley.

We went through Paisley and onto the M8 across the river Clyde onto the A82 where we then turned off to Balloch to get the first of the two National Parks done.

We found the Visitor centre at Loch Lomond and drive on the path get our evidence photos done once that was sorted we decided to park the bikes on the road and nip into the local cafe for a diet coke break.

After an hour’s rest we set off again on the A82 towards Fort William but just before we stop at Ballachulish and the Loch Leven Hotel, I luckily managed to park right by the door and booked in for the night.

We had a quick shower, got changed and went down to the bar to have a few pints of Guinness, a bar meal followed by more beer and then off to bed. (By the way the Loch Leven Hotel is a great hotel and bar if you’re up here looking for somewhere to stop I would recommend checking the place out)

The following morning with a full Scottish breakfast in our bellies we set off along the A84 and turn off along a small road to see Ben/Glen Nevis but found that after a few miles we had to turn around as the road was a dead end! We had to come all the way back into Fort William before taking the A82 alongside the Loch Lochy and Loch Ness but we didn’t see Nessie, must have been asleep. (More likely Nessie saw Bonzo and did a runner – Rig)

We finally stopped for another diet coke moment just south of Invergarry, on the west shore of Loch Oich at a roadside shop called The Well of Seven Heads Store and being the nosy bugger that I am I asked why the shop had such an interesting name, as it turns out the place had quite a story about it as it was named after the nearby monument known as The Well of the Seven and commemorates a very ghastly story. 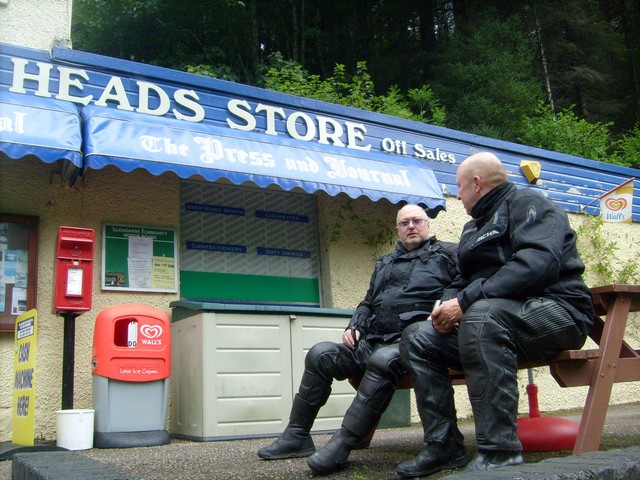 The inscription on the front of the monument:

Which in the swift course of feudal justice inflicted by the orders of Lord MacDonnel and across overtook to perpetrators of the foul murder of the Keppoch family?

A branch of the powerful and illustrious clan of which his lordship was the chief.
This monument is erected by Colonel MacDonnel of Glengarry XV11 Mac-Mhic-Alaister his successor and reprehensive in the year of our lord 1812.

The heads of the seven murders were presented at the feet of the noble chief in Glengarry castle after been washed in this spring and ever since that event which took place early in the 16th century it has been know by the name of Well of the Seven Heads.Vengeance

Later on that day, after a few sharp showers Bonzo, who had being riding in leather jacket decided that he would like a waterproof jacket so into Inverness we went looking for a bike shop, we went along an industrial estate saw a butty wagon (Bonzo can sniff out a fried pork from 100 yards) and asked the guy behind the counter if he knew of one luckily he did and pointed out where the local bike shop called Mitchells Motorcycles on my GPS. So 30 minutes later and Bonzo was £110 lighter but he’s got a new waterproof jacket (Mrs Bonzo will kill him) he he..

So back into Inverness and onto the A9 and across the Kessock Bridge keeping on the A9 coastal road towards Wick and then took the A99 towards John o’ Groats. 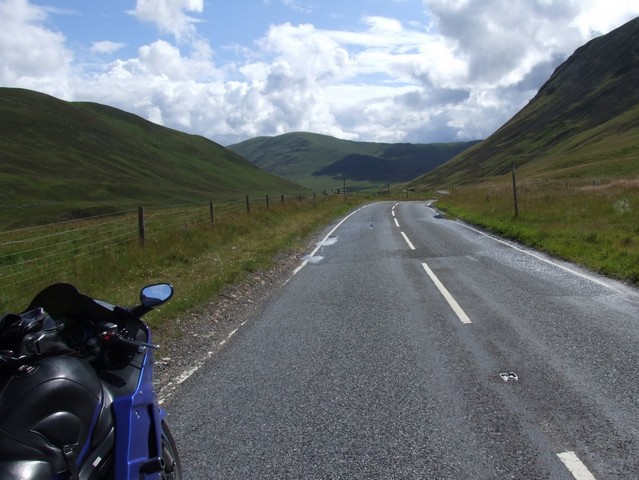 We arrived in John o’ Groats about 5 ish but unfortunately there’s not much there so we took a few photos and had a drink and a cake in the cafe (more diet coke). They take the distance signpost down unless you pay so we decided to go to along the single track road out of John o’ Groats to the lighthouse at Duncansby Head as that’s the real north eastern tip of the Scottish mainland beating John O’ Groats by a good mile, plus the view over the high cliffs are outstanding.

We then headed back to Wick to find a place to stay where we found a great hotel called Mackays Hotel so we got booked in, found my tiny cupboard room, showered (Yes even Bonzo!) and found the bar and preceded to sample some of the local food and beer.

While we were staying at the Mackays Hotel we found out that the street next to the hotel is in the Guinness World Records for having the shortest street in the world at only 6ft 9in long.

We got up next morning and after hearty breakfast we headed off along the A9 to Inverness and then out towards our 2nd National Park at Nethy Bridge where we got to take some more evidence photos, drank more diet coke and much needed toilet break. 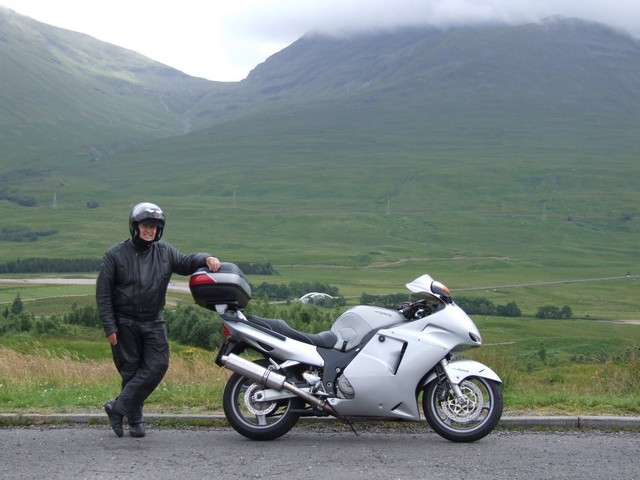 While playing with the Sat Nav looking for something interesting I found an appealing sounding place called “Waltzing Waters” that was only about 25 miles away, thinking it sounded a nice water fall we headed out to it only to find out it was a new industrial unit with lots of water and flashing lights for the kids…What a pair of prats we are….lol.

We did meet up with another biker in the hotel in Wick, a American chap from London travelling around Scotland, he came up across the mountains said it was a good road apart from getting a soaking. So we set off back along the A9 towards Inverness, turn off on A95 to Ballindalloch and turn down the B9008 then onto the B9136 then onto the A939 across the Cairngorms Park, what a fantastic bunch of roads. We keep going and find ourselves low on fuel (it’s further than we thought) thank god for Sat Nav it said it was only six miles to the nearest garage. So we then keep going along the A939 peering into the distance in the hope of spotting the garage before we run dry.

When we get there its two old pumps on one side of the road, looked like something from 1940’s (Bonzo should know) and small stores across the road, we thought it was derelict till the lady came out the shop! 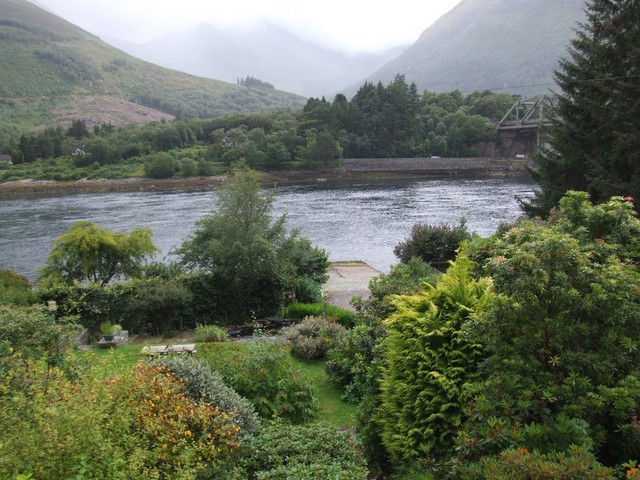 Now filled up with fuel and raring to go we kept on the A93 towards Perth. We cut around Perth and onto the M90 turned off at junction 6 to Kinross and found another hotel via the Sat Nav called The Green. The hotel turned out to be a very nice hotel costing £62 per night with breakfast, large rooms, good food and service (!). After showering, more beer and food it was time for bed. (Isn’t it funny how you are still hungry in the mornings? He He)

After breakfast we started to load our bikes up with luggage and it just was starting to rain! Great…We then jumped back on the A90 towards Edinburgh, around the ring road turn down the A68 to Newcastle, down the A1 to Leeds, jumped on the M1 and M42 to Coleshill and called in the Wheel House Tyres where Bonzo had two new tyres fitted as he had worn his out during the trip!

We left about 4ish and got to my house by 4.30 pm. Bonzo had a bit of a rest then decided to head home in case it started raining, he only had another two hours, 120 miles to Cardiff.