The “Ride the County” concept is a by no means small effort to raise funds for the Thames Valley Air Ambulance, this very activity brings to the fore the ever-present debate of the necessity of these events in order to raise money for what is a first class service up and down the country. Why these are not funded by the taxes that the working man stumps up beggars belief but that is just my opinion and as always other opinions are available at all good outlets.

With the recent good weather it was bound to be a naff day, and sure enough the forecasters were full of doom and gloom, “Saturday will be a mixture of heavy showers and a bit of sunshine if you are damn lucky”, this was essentially the BBC offering and to be fair to them they were very near the mark. Heavy cloud greeted the daybreak and the prospect of a trip on a KTM 390 Duke up to Redline Motorcycles in Loughborough would not have been high on my list of wants but had to be done so I could be reunited with my 1190 Adventure, complete with the luxury of heated grips should my delicate pinkie’s need a warm. 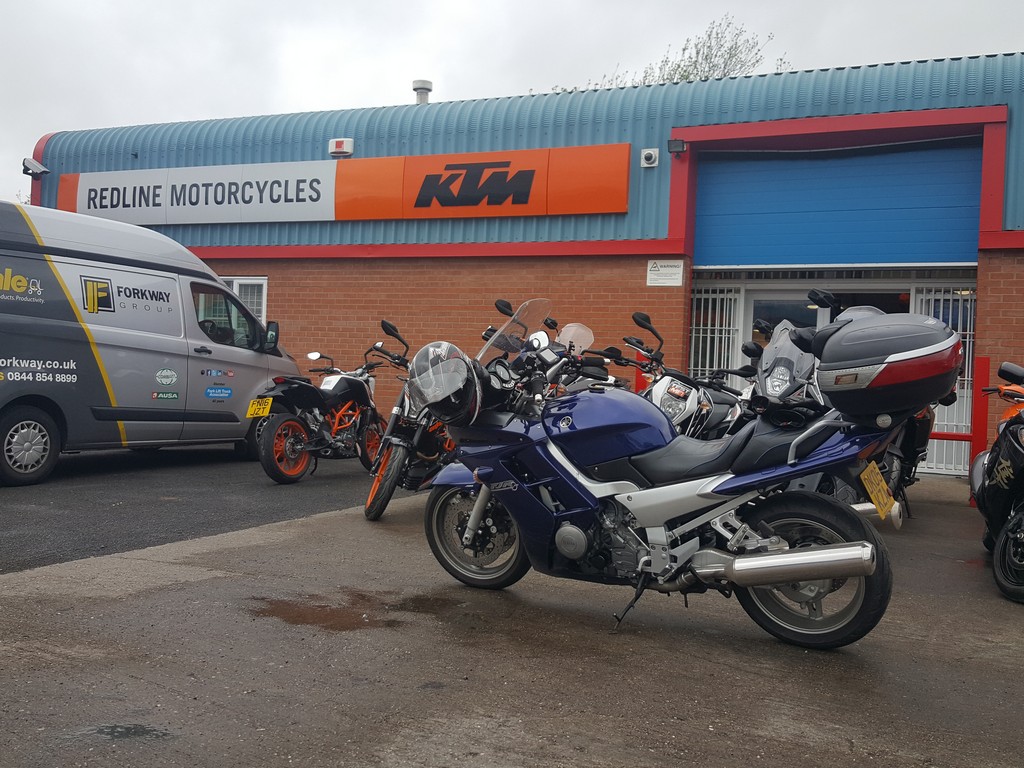 I had arranged to meet up with Rig at Redline and after parting with an arm and a leg travel down to Banbury and rendezvous with the other collective members who had made the donation to take part in the event. After leaving Loughborough the trip to Banbury was a bit convoluted due to my lack of route research, I had placed a waypoint on the route and not double checked it, this turned out to be in a layby and the finicky Sat-Nav didn’t cross it off as we hadn’t gone straight through it. By the time I had corrected this cock up I had missed the turn-off and we ended up going through the middle of Rugby to pick up the A423. As it turned out it wasn’t too bad as we still arrived at Reg’s Cafe at 10:15 which was close to the pre-arranged time.

The Cafe was the first checkpoint for the run and by the time Rig & I arrived Bob, Bonzo, Angus & Chinney had already stuffed their breakfasts. They had seen a free table and went for it, this was not a bad tactic as the place was packed and after Rig & I had managed to procure seats and stuff a breakfast it was easy to see why the place was popular, the breakfast was of a very acceptable standard. 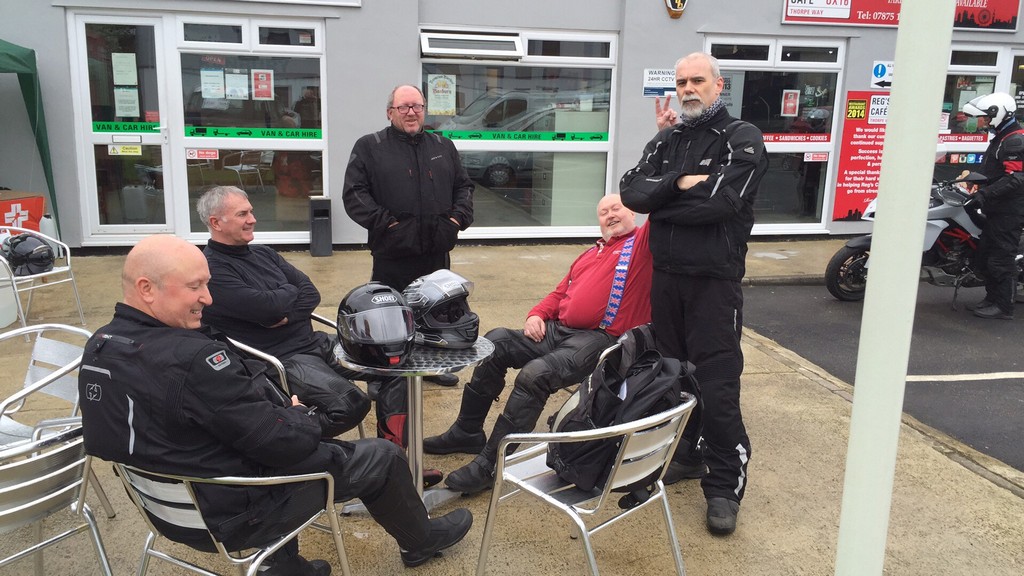 With the first photo taken by the organisers and our cards stamped it was time to assemble in an orderly queue and set off to Stowe Gardens Archway in Buckingham. This was the point that my planning was to let me down again, It was a splendid turnout from the Rigsville Collective and against my usual system off knowing roughly where I am going I hadn’t been prepared to be thrown in the front of a six bike convoy so had to rely totally on the Sat-Nav, big error that one. The Sat-Nav route didn’t last long, in fact, we hadn’t even got out of Banbury before I went wrong, I turned off onto the A361 instead of the A422, my only excuse was a car in front at the roundabout in the wrong lane and all at sea. However, it was a nice secondary route which took us through some lovely small villages and narrow back roads, when we arrived at Stowe Gardens the lads were quick to commend me on my picturesque choice and several requested the data dump off the Sat-Nav so they could store it for future reference. It was at this point I had managed to get my helmet off and I heard what they were actually saying and it wasn’t that complimentary.

A short walk back to the arch for the necessary photo and also a marvel at the architecture, didn’t even know the place existed and it was set in a fantastic location at the head of a long straight road, must have been a marvel of engineering in its day, must look it up on Google (Street view link) 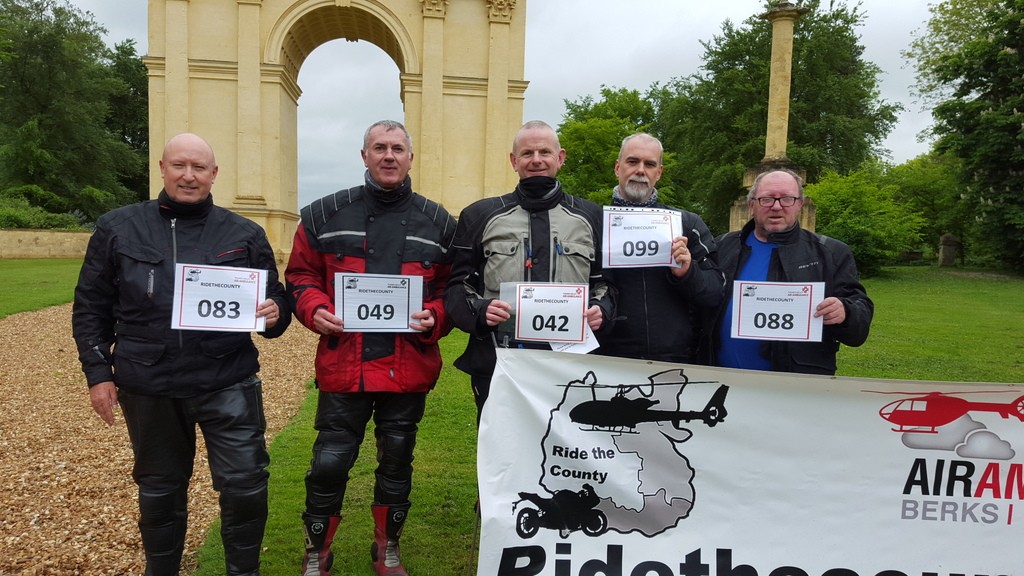 After my inadequacies of the last leg, Rig took up the mantle of point duty and led us unerringly to Brill Windmill and gave a fine demonstration of how to listen to and follow the Sat-Nav. As usual with windmills, this one was set in a fine viewing location which was well worth a view. Next to this attraction was a rather smart pub (The Pheasant) so it was rude not to settle down and partake in a diet coke. The outside smoking area was set out on a nice veranda and perfect for us bunch. The interior of The Pheasant looked very nice and catered for the food market which the majority of pubs do these days. I didn’t look at the Me’N’u but it gave the impression of being on the high side of standard pub grub. 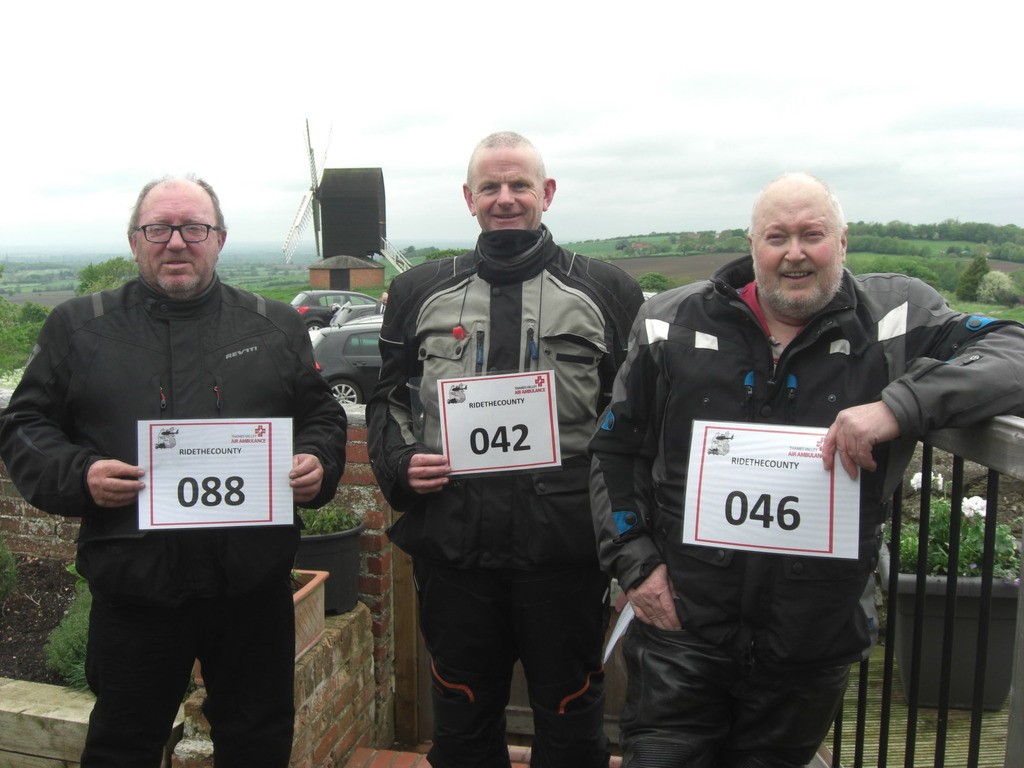 After our rest break, I was again thrust into the fore, Bonzo must have wondered what was going on as he is usually the point man as he possesses a natural built in Sat-Nav, must be down to his age and experience! Anyway, it was back down the lane and off to Broadway and specifically the fine example of a Tower stuck in the middle of nowhere. The car park was a distance away from the organiser’s photo point and I was the only one to carry on and setup as directed, the others just stopped on the side of the road! still, a bit of exercise is always good for you as it was quite a trek back up the hill. Whilst I held up proceedings Rig took the opportunity to test Bob’s Beemer and showcase the new exhaust which was well worth the aural pleasure. 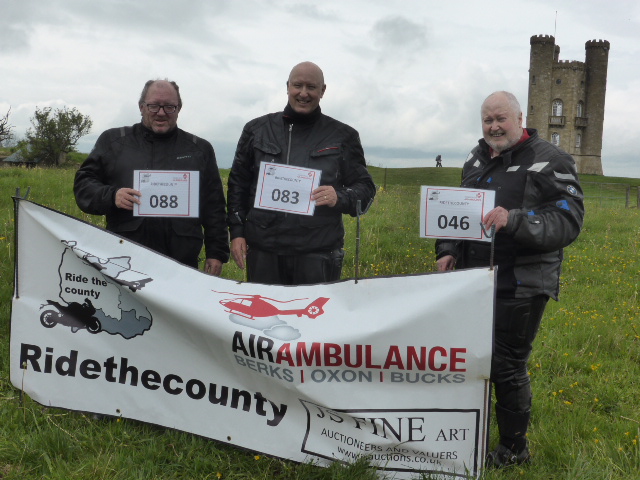 All that was left to do now was head to the finish point at Minster Lovell, a fuel stop was in order then back we went and found our way to The White Hart. The weather was a bit hit and miss all day long so by the time we got to the finish it the rain was working its way through the waterproofs and most of the collective had embarrassing wet patches, it looked like a day’s outing with the incontinent old codger’s club. The White Hart is an old hostelry near Brize Norton, smashing place inside and looked to serve up some decent real ale, a must on the “decent places to visit” list when the “arm in arm” is on driving duty.

After a quick refreshment and a natter about the day, there was still time for a trip to Cotswold BMW for free coffee and biscuits whilst Bob went to complain about a failure on the Beemer, it was only an excuse for some free scram really, but that is never to be turned down! I, on the other hand, decided to make tracks home and catch some of the Cup Final although I wish I hadn’t bothered. 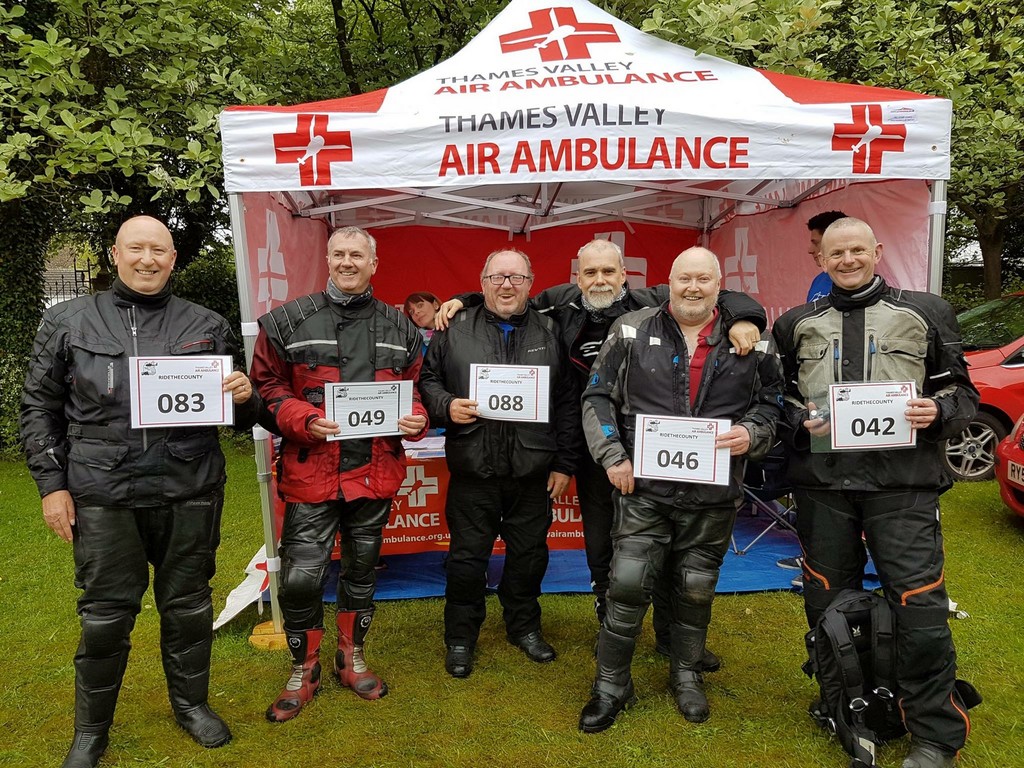 All in all a brilliant day out, very enjoyable even given the changeable weather conditions. The air temperature remained fairly constant so getting a bit on the damp side didn’t result in the usual shivering condition that sets in during the colder months of the year.

An email from the organisers on Monday morning suggested that the money raised by the hundred or so entrants would be enough to cover a couple of flights. In the grand scheme of things this is a drop in the ocean but as the saying goes “every little helps” although I wouldn’t class a few grand raised as a little, a marvellous effort by the organisers and if you didn’t get out and about this year keep a lookout for next year’s event and take the opportunity to travel a few miles and raise a bit of cash for a very important cause. 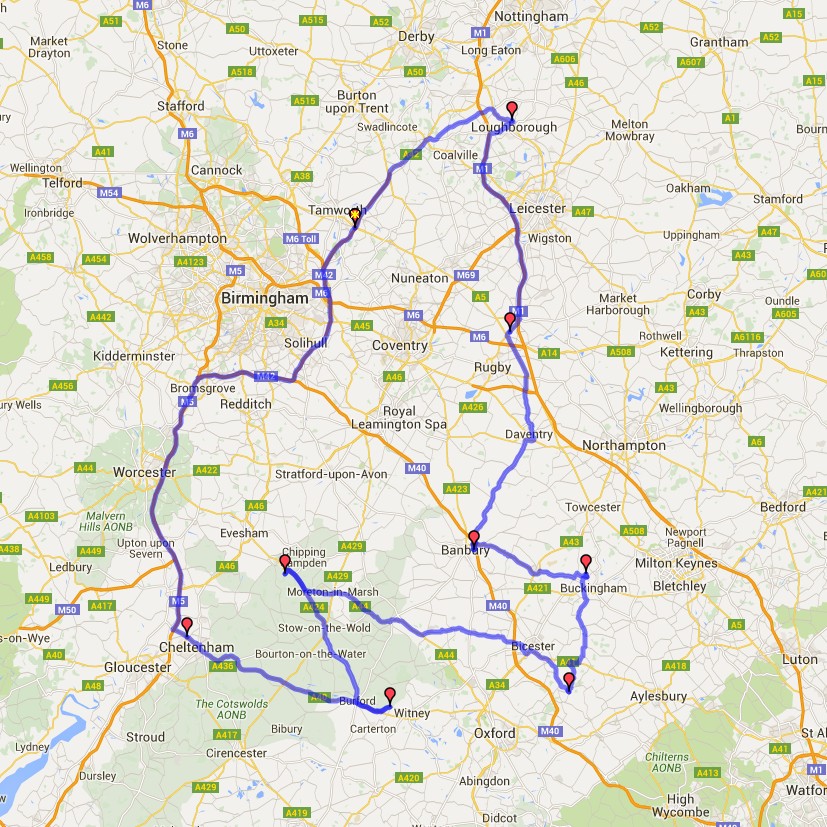