The Red Marley Hill Climb is classic motorcycle hill climb that takes place near Great Witley in Worcestershire. This was the 1st time I had been to this event and from what I had heard about it I was really looking forward it.

Due to everyone else having other commitments only myself and Bob were able to go, we decided rather than go the boring direct route we would take a nicer route past Stratford-Upon-Avon, Arrow and south of Worcester so that we could call in to Fromes Hill Cafe for a quick breakfast.

Unfortunately when we arrived at Fromes Hill cafe we found it closed so we decided to head for Great Witley and get a burger instead at the hill climb.

After following the signs for Red Marley we came upon a queue of traffic leading up to Great Witley and then we were directed in to the field set aside for bike parking.

The only complaint I have with this event was the bike park, it was located near the entrance (nice) but it was on the side of a hill and the field was very bumpy (bad) but the organisers had thoughtfully placed a stack of wooden cut off’s near the entrance for you to place under your side stand to stop it sinking into the field (good). The problem was that with the incline of the hill and the rough ground it was very hard work just keeping your bike upright in fact I saw 3 riders lose their balance while attempting to park their bikes and each on toppled over and onto the grass, in each case there didn’t seem to be much damage excluding the riders pride and obvious embarrassment. 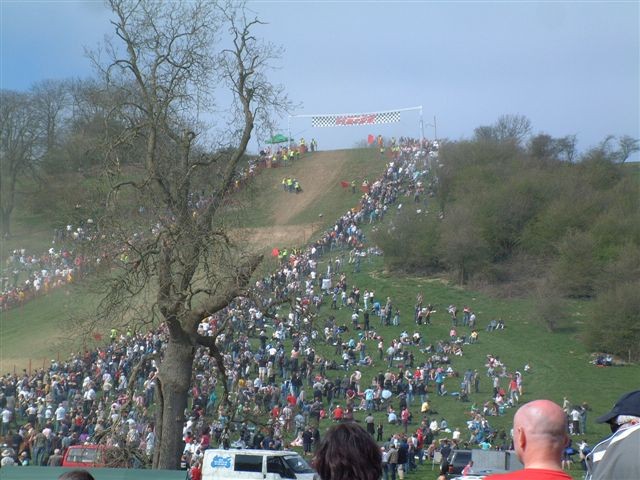 After successfully parking the bike we then had a little walk up the hill to the entrance and paid our £5 to get in (kids go free but no matter how hard Bob tried to convince them he was 14, he still had to pay) then I had to physically hold Bob back as he wanted a go on the bright yellow bouncy castle but I managed to convince him that food was more important that him getting a few jumps in…

After a cheese baguette and a diet coke we settled down on the grass and watched the racing. One of the nice things I noticed (apart from all the lovely ladies) was that because it has a hill climb you could watch the event from almost anywhere, that is as long as some twats don’t come and stand right in front of you while you and a couple of hundred people are sitting on the ground enjoying the racing and blocking your view, a  very thoughtful bunch of twats they were, especially the guy in the cowboy hat how cute (ya twisted f88k)

Highlights of the day included watching some brave soul on a bright yellow scooter attempt the hill and he almost made it to the top, much to the everyones enjoyment! 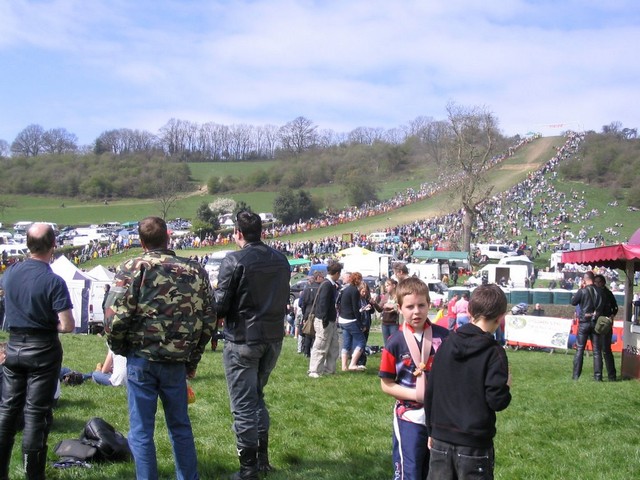 There was also some great classic machinery on display and the air was filled with equal amounts of dust and Castrol-R (mmm lovely) and quite a few riders didn’t quite manage to get up the hill with one or two deciding they would have a better chance by going sideways into the roped off area!

After watching the racing for a few hours, having a wander around the handful of trade stands and spending 30 glorious minutes queuing for the toilet we decided to brave the bike park and start heading home.

The event was extremely well organised, well marshalled and not overly priced and well worth a return trip, only this time I think I will take the car (and the kids) as it’s much easier to park and I won’t have the worry of dropping my bike.