Early Saturday morning and it’s another great weekend away on our bikes and this time we had a cunning plan, we aimed to visit the North of England and visit as many of the national parks as we could as part of the British National Parks Challenge.

Unfortunately Chinny would not be able to make this weekend’s trip which was a shame as he was missed and not only for his amazing ability to eat huge quantities of fried pork, make very amusing noises from his rear quarters and most importantly  and so at 7am on a cold Saturday morning we met at Tamworth’s M42 services all ready for a weekend of many miles, cold weather and smiles!

We had already decided that because we wanted to try to cover 5 parks this weekend that we would have to do quite a few miles on A roads and motorways instead of using the more scenic back roads so once leaving the warmth and comfort of the services we headed up the M42/A42 (Hi Derek!) and onto the M1 until we turned off at Junction 29 and headed around Chesterfield and along the B6051/B6054/A6187 into Hathersage where we could see the mornings mist clinging tightly to the hills we then turned right onto the A6013 where the road takes you along the beautiful Ladybower reservoir shortly we arrived at the Upper Derwent Visitor Centre the site of our 1st national park of the day – The Peak District National Park. 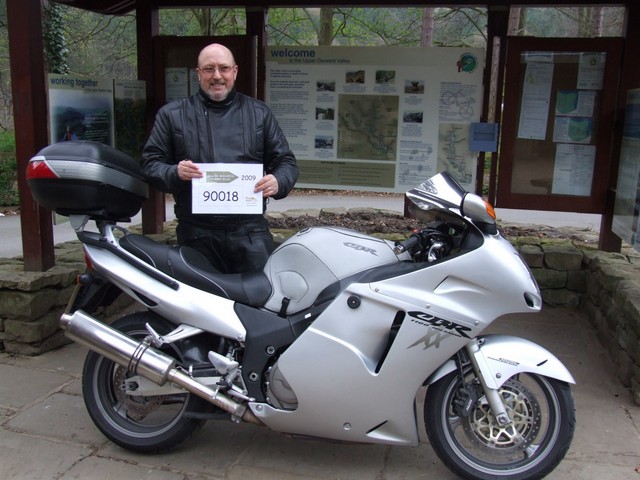 After arriving at the Upper Derwent Visitor Centre we then had the task of finding somewhere we could park our bikes that would show that we really were at the correct location. After looking around we found a notice board that proudly displayed “Welcome to the Upper Derwent Valley” and then we each took a few photos of one another near the sign with our bikes while holding our placard’s that show our own personal number as evidence that we did find the location and did so while riding our bikes.

While we were standing around trying to figure out what, where and how it seemed that the park was due to host the 4th Derwent Dambuster organised by Challenge Cancer Through Adventure and the car park was slowly filling with more and more people in lycra each one of them staring at us (or maybe just Bonzo) wondering WTF was going on?

Once we had taken our photos the next important decision was breakfast, we decided that because our next planned national park was going to be the Yorkshire Dales it would be foolish not to call into the world famous Squires Cafe on the way oop north. 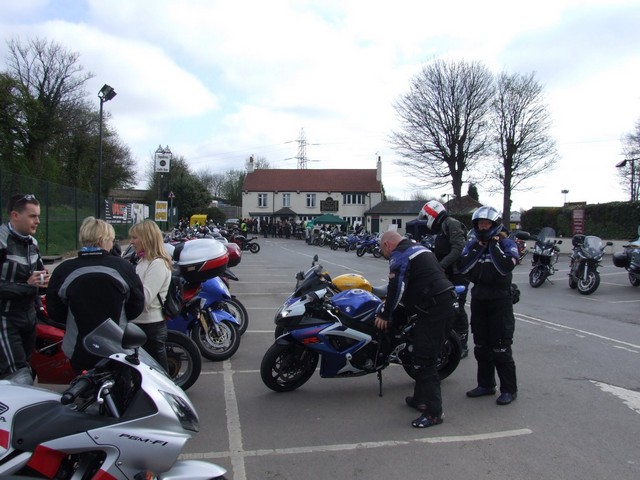 So after another bunch of miles on the M1/A1 we arrived at Squires Cafe which is just outside Sherburn-In-Elmet only to be greeted by what we thought was Bonzo’s fan club – as it turns out the 50+ bikers already at Squires Cafe were members of York Advanced Motorcyclists who meet up here every Saturday. After parking the bikes and wandering around the car park checking out the other bikes, like you do, we headed indoors to sample to delights of a Squires fried breakfast.
After munching our way through a load of freshly cooked pork we jumped back onto the bikes and headed back up the A1 for another 36 miles until we turned off onto the very welcoming and twisty A684 that took us all the way into Hawes and our next photo stop at the Hawes National Park Centre. 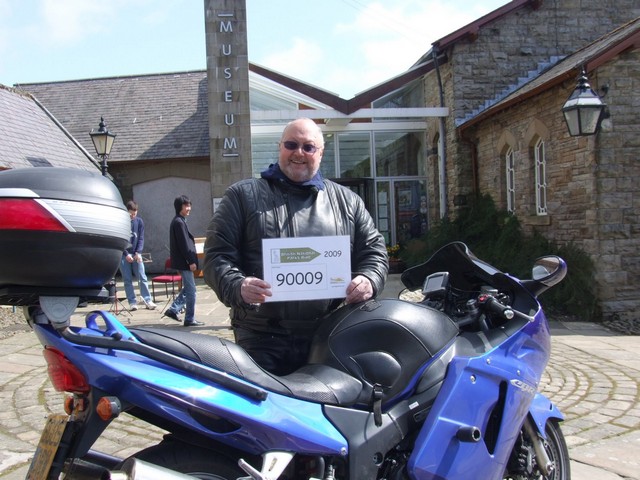 Unfortunately due to the lack of time we didn’t have much chance to look around Hawes but it looked like a lovely quaint place and would be well worth a return visit some other time even if it’s just to ride the A684.

We continued west along the A684 and with each twisty mile after twisty mile the scenery became more and more beautiful so much so that we just had to pull over and take in the scenery and snap a few photos. 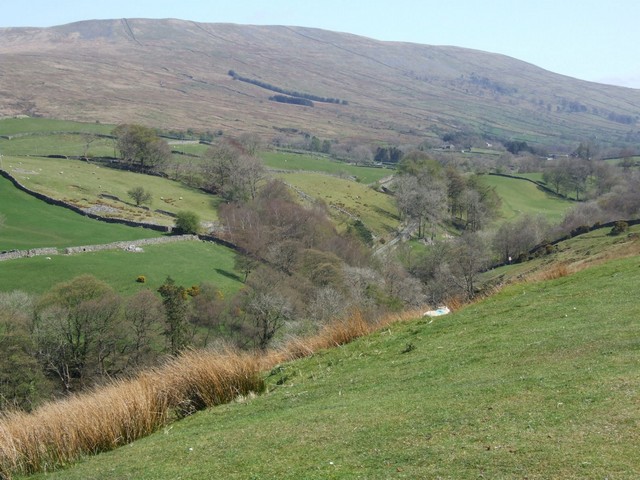 After crossing the M6 we then navigated the tourist traffic around Kendal and Windermere until we found our 3rd national park destination of the day – Lake District Visitor Centre at Brockhole. 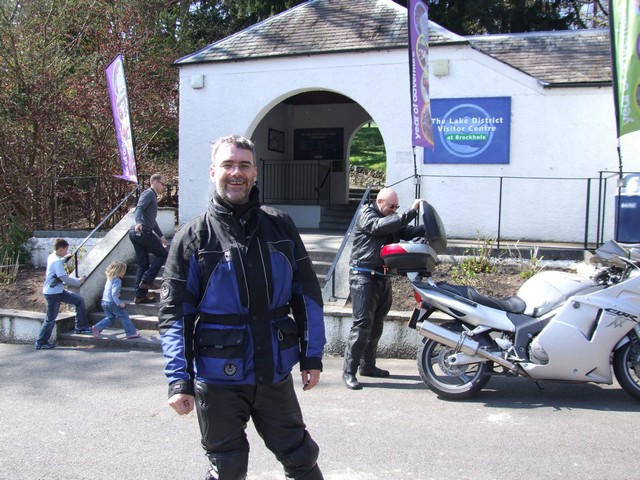 Again we parked up and took the photo’s we needed as proof of our visit to the Lake District but instead of heading straight on to our next destination we decided that it would be a nice to head to lake Windermere and take a few photos so we followed the lake north and arrived in Ambleside where we found a place to park the bikes and took a few moments to appreciate the natural beauty of the lake district but resisted the temptation of the local ice cream seller. 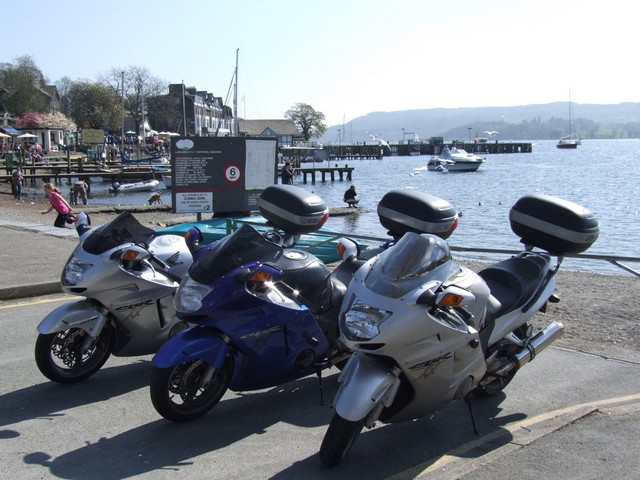 Once again we jumped back onto the bikes and headed north out of Ambleside and as we travelled along the Kirkstone pass and then along the A592 the hugs the shore of Ullswater we enjoyed both the roller coaster twists and turns but also the outstanding beauty of the scenery unfortunately we arrived at the M6 all too soon and again headed north.

As we neared our next national park the roads became straight and seemed to almost disappear into the horizon but soon enough we arrived at the Once Brewed Visitor Centre that is home to the Northumberland National Park and went through our now almost near perfect F1 pit stop style routine of finding a place to park the bikes so that we could get our evidence photos taken and then after a quick cup of coffee from the visitor centres vending machine we headed off in search of our next destination. 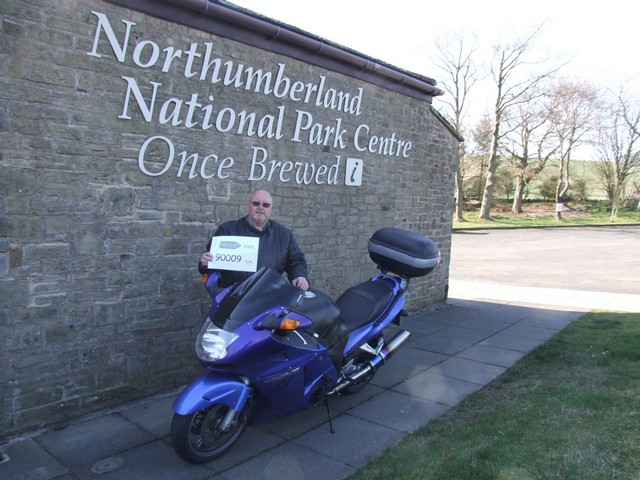 By now it was getting late, we were getting tired and we had another whole day left to do just one more National Park so we decided that we would head towards our next National Park but find a hotel where we could stay for the night.

Fortunately Bob had stayed in the area before and being a big fan of the television program Heatbeat he knew of a nice hotel in a little village called Goathland otherwise known to the rest of the TV world as Aidensfield. 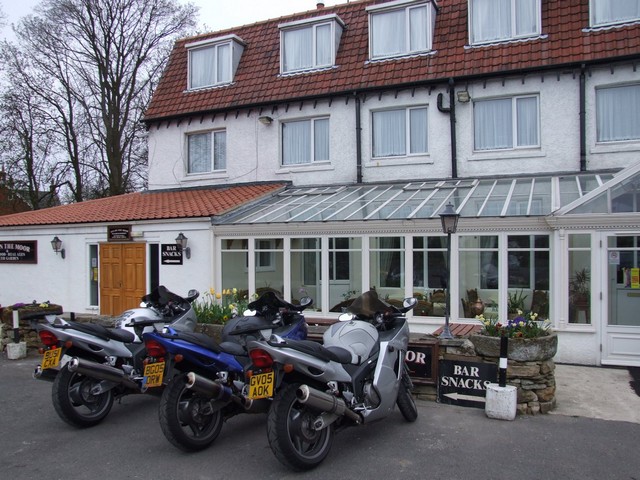 Inn on the Moor Hotel, Goathland

We arrived in Goathland and booked into our hotel for the night – the Inn on the Moor Hotel,  after booking in and sorting ourselves out we headed straight into the hotels bar for a plate of Whitby Fish and Chips and then afterwards it was only polite to head into the village pub for a pint of Guinness or 3. 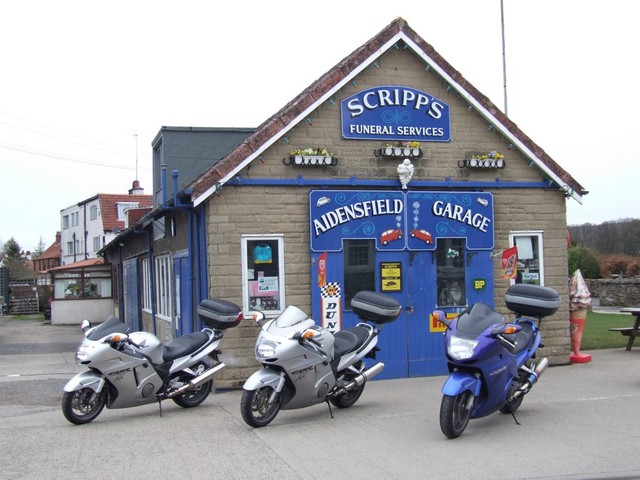 The following morning we got up nice and early and had a wander around the village before heading back to the Inn on the Moor for a nice cooked breakfast. Once we were fed and watered we took a couple of photos of the bikes around the village and then headed back the way we had come the previous night to get our 5th and last of the weekend National Park at the Moors National Park Centre in Danby. 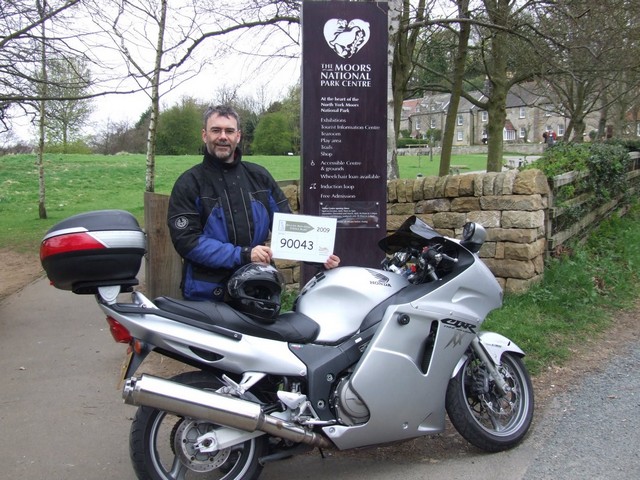 After getting our usual photos we headed into Whitby and parked at the Whistle stop Cafe we then had a wander around then decided to start the long journey home. 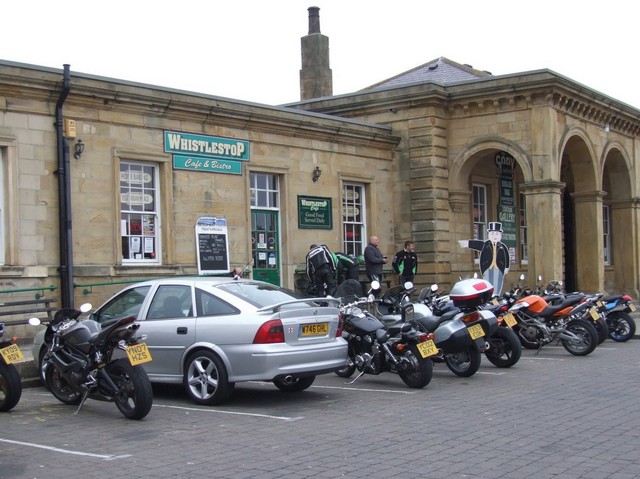