It was the middle of April already and this was my first RigsVille Collective Rideout of the year. Where has all the time gone???.
The day dawned with perfect weather, wall to wall sunshine, the clear visor was removed from the Shoei and the dark replacement fitted in anticipation. I set off a bit earlier than usual for the trip to Bob’s gaff as I was going via Warwick to tidy up a TMBF Challenge 100 pub tag, the Vine in West Street was the target and being 8:30 am the road outside was clear so a good photo opportunity was taken and another 10 points in the bag. 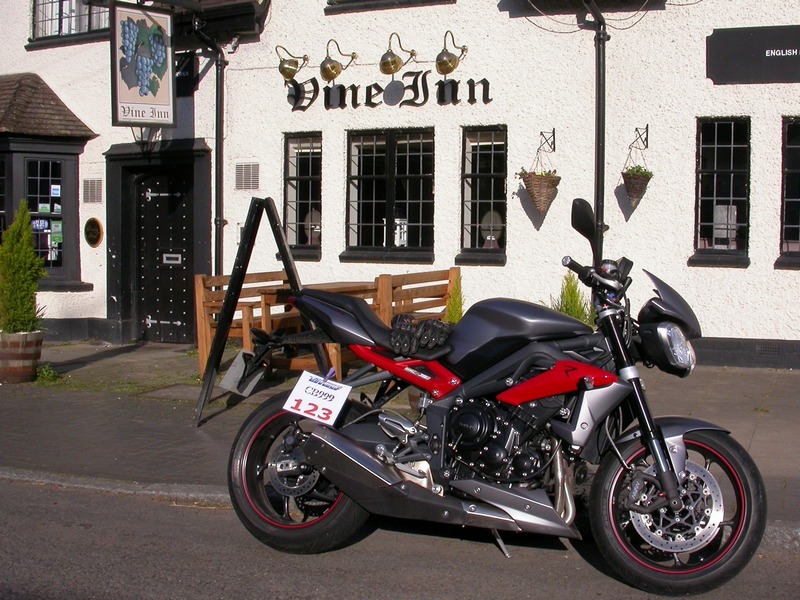 There was four of us meeting up at Bob’s with a trip down to one of our favourites, Jo’s place on the A40 just outside of Ross-on-Wye. Bob was a bit unsure of his fitness but had been out earlier to try it out and decided he was raring to go. 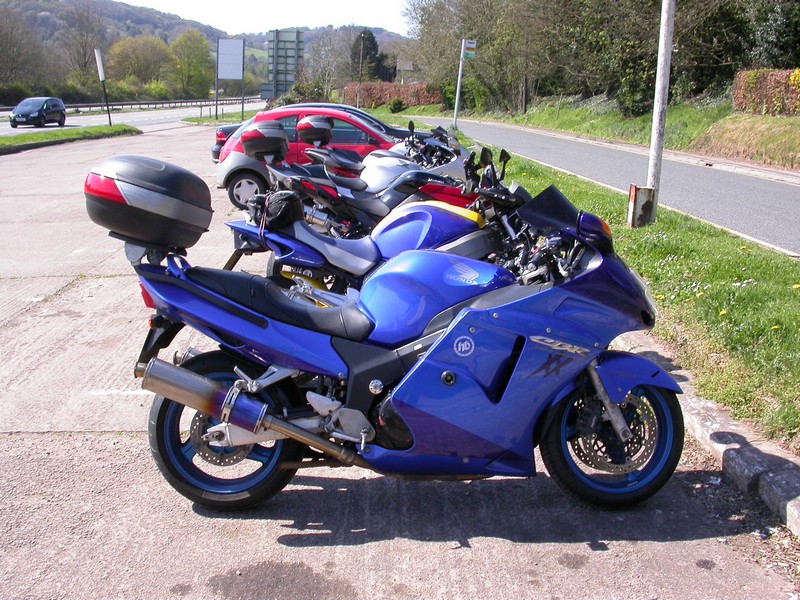 We set off heading to Redditch so that I could top up the Street Triple’s small tank for the trip ahead, the plan was to head towards Bromsgrove and pick up the M5 to join the M50 to Monmouth. All was going tickety boo until the overhead matrix signs on the M5 announced that the M50 was closed, was it true? I had found myself up at the sharp end and couldn’t decide which alternative route to take, should it be Worcester? there was always Junction 9 to Tewkesbury? decisions, decisions, in the end, I opted to keep going and take the Tewkesbury option, this turned out to be the wrong one as I was informed by the other members on the trip. 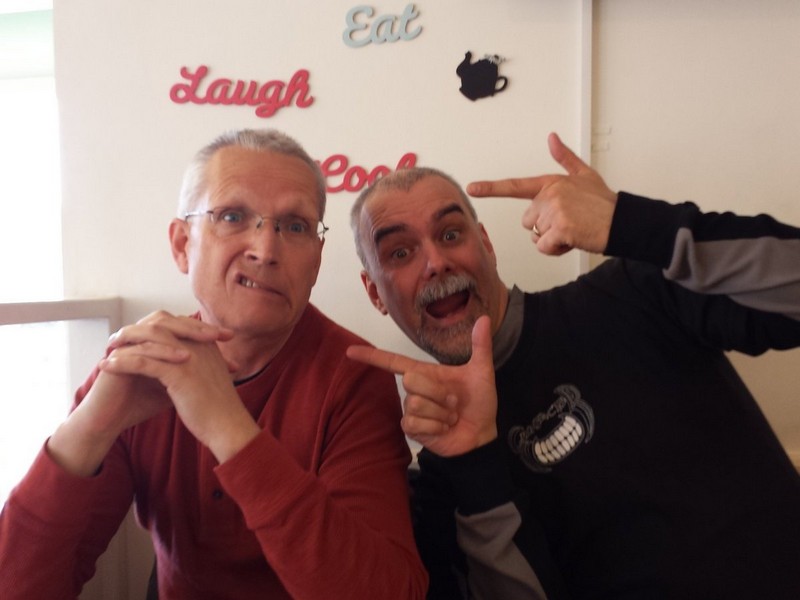 Ray and Rig inside Jo’s Place

A bit of roadwork in the general heading of Wales followed until a plan was formulated, the A38 southish to pick up the A40 west, the Sat Nav’s seemed to like this option and off we headed. It was a bit of a convoluted route but the roads were good and they led us to our rendezvous with our Welsh contingent at the cafe.

We may have been a bit late arriving but you know when you enter a shop in Wales the locals start talking in Welsh, well it seemed that way with our Welsh buddies when we entered they were already on their second cup of caffeine and were difficult to understand, probably in a mood with us as they were no doubt starving, as it turned out this was not the case, they were just talking bikers gibberish as usual so we settled down and were all talking the same language as you do when waiting for the fodder to be served. It all went quiet for a while whilst the excessive calories were taken on board. 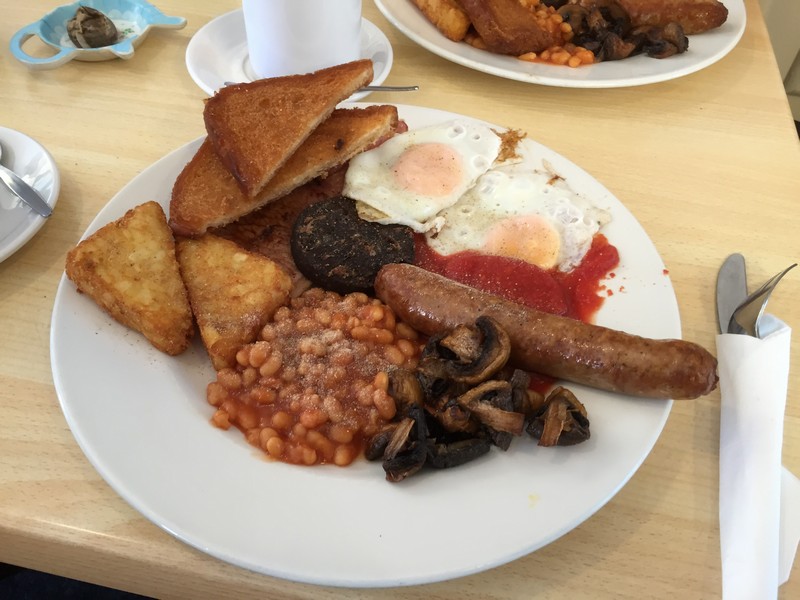 After a further refill and loads of gibberish thoughts turned to the next stop off, the trusty destination of Fowlers in Bristol was decided upon and off we set with Mr Sat Nav himself Bonzo leading the way. Bonzo led us on a fantastic route, from Jo’s Place we headed to Monmouth on the A40 there we turned off onto the A466 Wye Valley route. This road followed the river valley to Tintern, where the old abbey looked splendid bathed in sunshine, on from Tintern to Chepstow where again the sunshine brought the best out of the Racecourse. This was a really excellent road, difficult to concentrate fully on either the scenery or the twisty road. 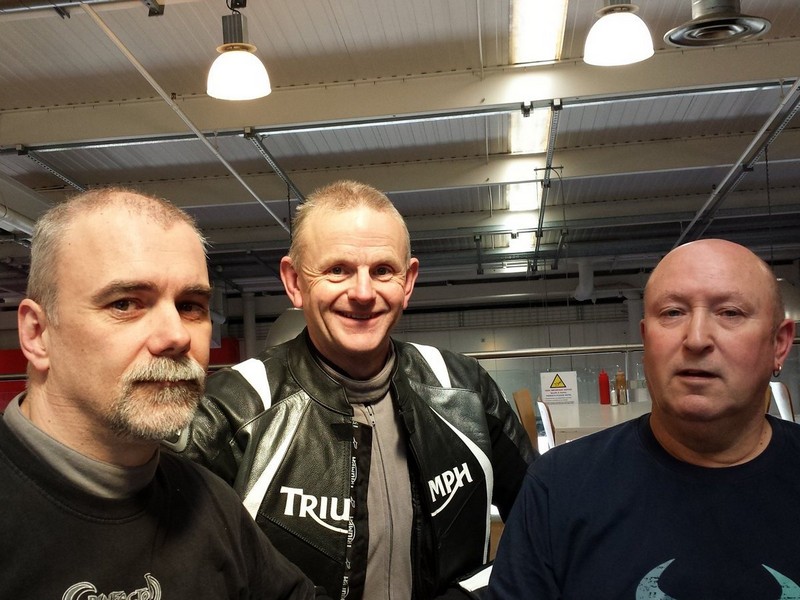 Rig, Steve and Bonzo inside Fowlers

The Severn bridge was closed which resulted in a bit of motorway work to pick up the second crossing and onto Bristol and Fowlers motorcycles. First stop was the cafe for refreshments and more gibberish then the usual tyre kicking session around the new bikes and fondling of new kit. After an hour or so it was time to head back home, the sun was still shining so after a final fuel stop it was a quick exit from Bristol to the wonderful Fosse Way for a the 100 miles home.

A really excellent day which covered 10 hours of fine roads and weather to match, Perfik