This rally was one that I was looking forward to; I was totally clueless in which way to tackle this year’s event after my errors last time around. It wasn’t that my original plan was no good, in fact with hindsight it had the making of a sound rally, it was just the afternoon was thrown into chaos after missing my high scoring timed bonus at Norwich station. I couldn’t make up my mind whether to stick to last year’s ethics or change it around, that decision would have to wait until I got my hands on the road book. One thing I did decide on early was to travel to the area after work on the Friday night so the Travelodge at Huntington came into some unexpected cash.

The final details were emailed through the weekend before the Rally; unfortunately, I was away which meant it was left until Monday before I could get to grips with the paperwork. After a few hours pawing over the rally book and computer files, I came up with an initial plan……. By the time I had totted up the mileage it would have been perfect for a 12-hour rally so it was out with the pruning shears. This had the desired effect which cut down on the mileage but with that also went the big scoring targets, can’t have it both ways.

Eventually I settled on an optimistic plan which took me well past the finish time of 5pm, however, I built in a few short cuts if required but pinned my day on being able to keep ahead of the times set in my ride plan. There were several factors which would play a part on the day, not least the weather but mainly the traffic. I would have to wait and see.

Thursday night before the rally saw me partake in a beer and curry evening which, due to my advancing years, give me a bit of a sleeping problem, could be the spices, could be the beer, who knows?.. anyway whilst I had time on my hands my thoughts turned to the rally route and eventually I decided that the plan was not going to work so Friday morning brought a rethink. I cut out a large loop, added in one option stop and brought the mileage down to a manageable 311 / 290 dependent on the options. This was to be my final plan.

I left work on Friday afternoon and headed up to the Travelodge, this organisation has it sussed, everyone I have been to is identical and for the services offered they must make a mint but you can’t knock them as they provide what is a very popular service. 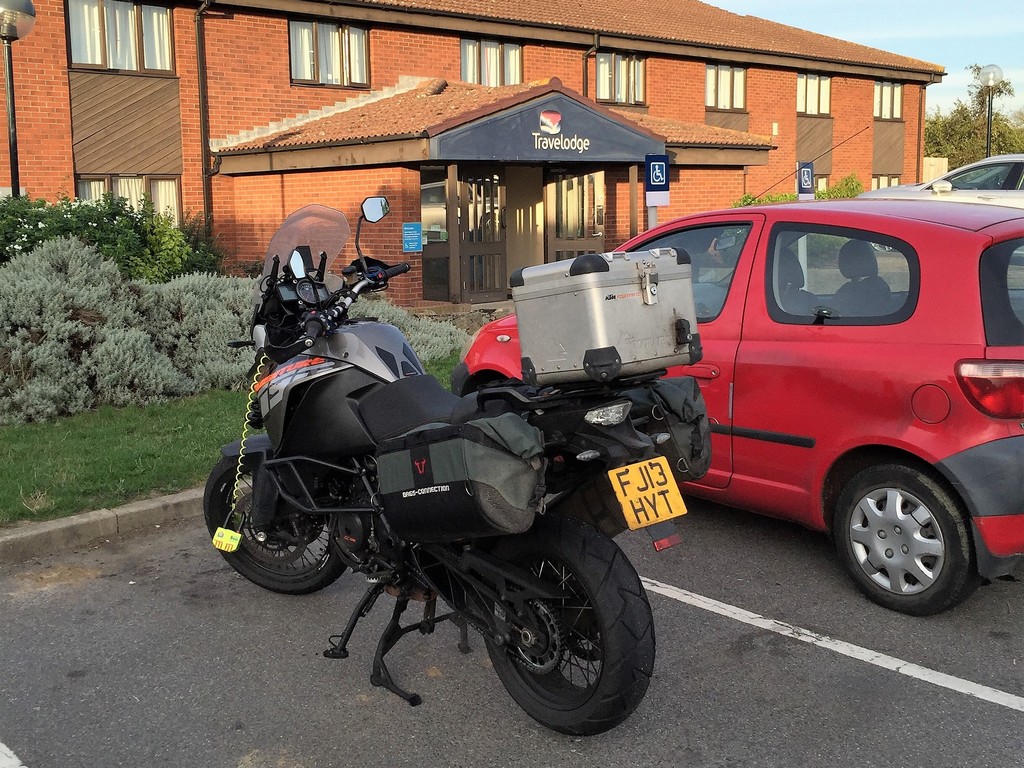 After loading up Saturday morning I brimmed the tank at the adjacent petrol station and set of for the Rally HQ 10 miles down the A14 in Histon. I was first to arrive and Mark showed me where to park up where I would be first away.

The next couple of hours saw me check in and receive my rally flag, the other riders turned up and went through the same routine, plans were discussed and caffeine consumed. Approaching the 9am setting off time, a last pit stop to the loo and then try and get the gear on as comfortable as possible ready for a long day in the saddle and finally the hour ticked over and it was the off. 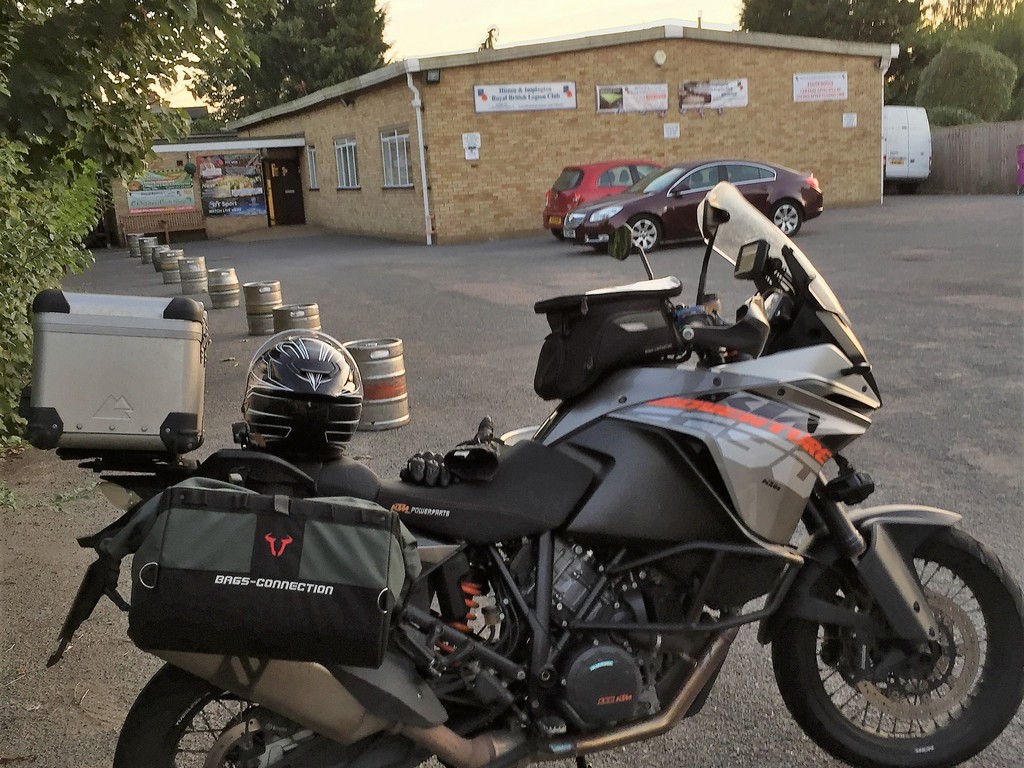 First stop was a short haul to the local American Cemetery, as it happened I made this stop alongside the two front runners in the pack, however this was the last I was to see of these experienced Iron Butt Rally guru’s until the finish where they had amassed over 13,000 points and finished only 100 between them, the eventual winner and his passenger covered some 380 miles in the day!!! 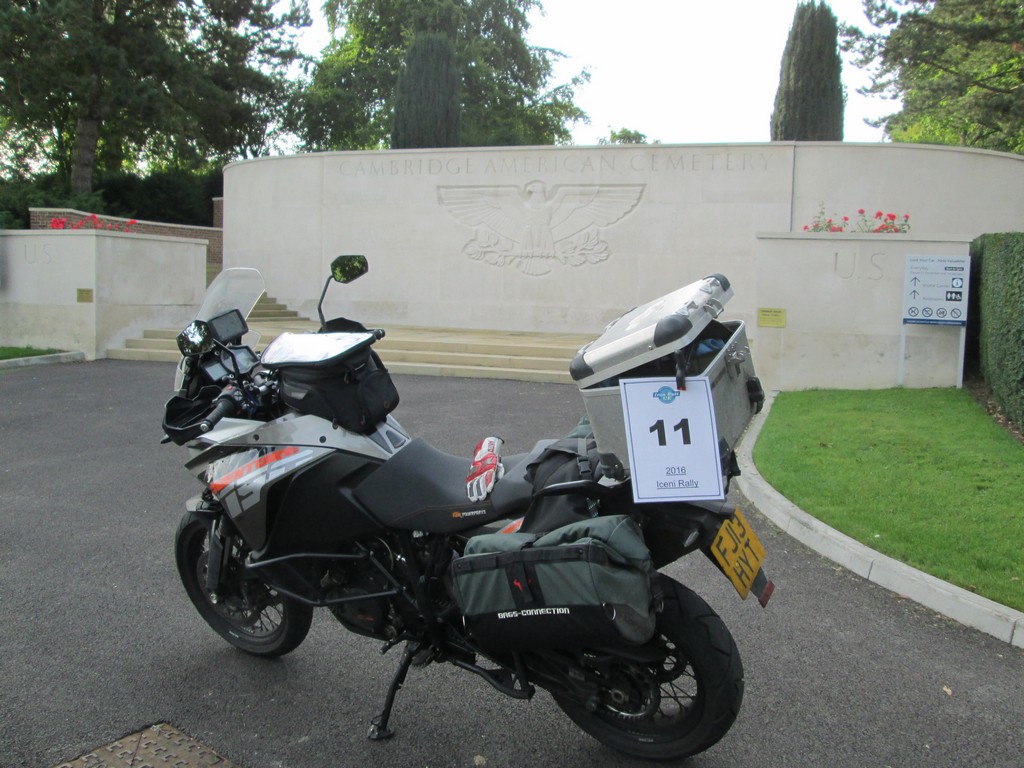 Next it was off to Cardington Hangers where they used to keep bloody great big airships, after one aviation themed stop it was off to another, Luton Airport, or to give it it’s correct title “London Luton Airport”, bit grand for a provincial airfield made famous in the 1970’s by Lorraine Chase. This stop was a relatively lengthy one as the instruction was to get a plane in shot so there ended up with three of us waiting for a plane to land, a nice Wiz air example gave us the photo required and it was a quick pack up and away, not sure what the local plane spotters thought of us! 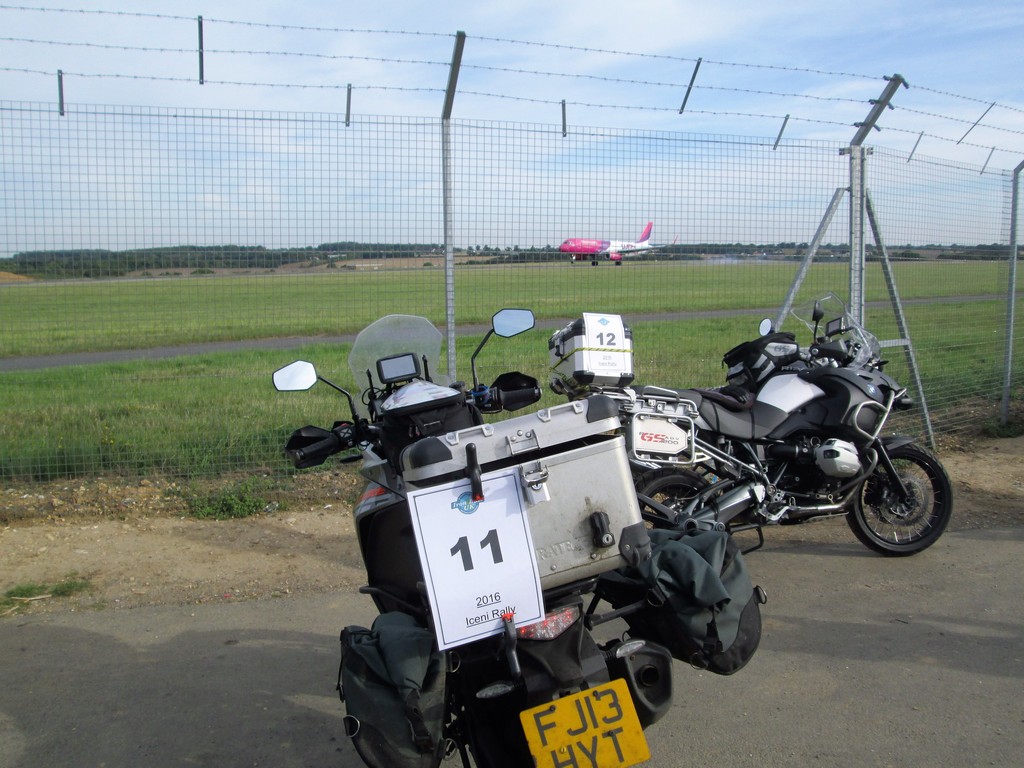 The next port of call was my first town stop and the Richard Whittingham School in Bishops Stortford, towns are where the ride plan can go badly wrong, traffic can be unpredictable especially on a Saturday, this is where bad weather can be an advantage as many shoppers don’t bother and stop at home, however, a fine Saturday in September brings out the punters in their droves, ah well such is life and the game must go on. 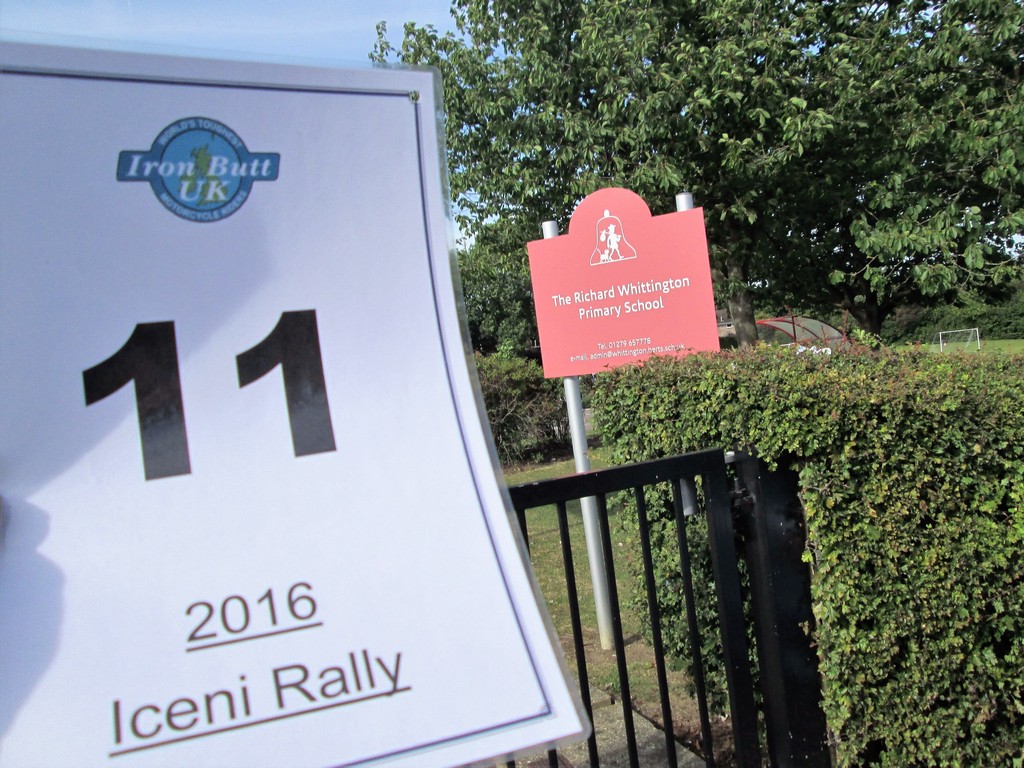 Back out into the sticks for the next few, Finchfield memorial was next up, the place was packed with bikes and all the local establishments were doing well by the looks of the hordes of folks about, I managed to get a parking spot and get the photo, tempting as it was to hang about time was pressing and it was all go to Melford Hall, another tourist spot which was busy. Help was at hand for this one as I caught up with another rally entrant who kindly took my photo which saved the posing time. 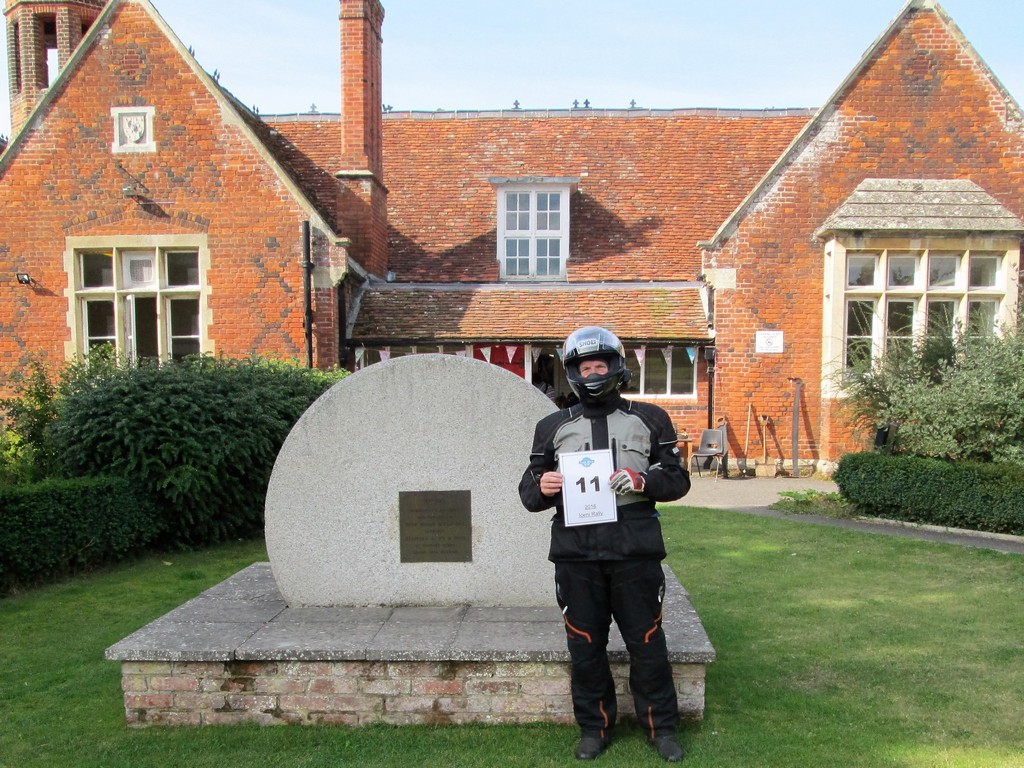 Two more aviation themed stops followed, Elmsett Airfield Memorial and Parham Airfield Museum. These two should have been split by a detour to Bawdsley Beach Martello Tower but my timings at this stage were spot on and as this was the option stop I had to forgo the coast trip to save the time. 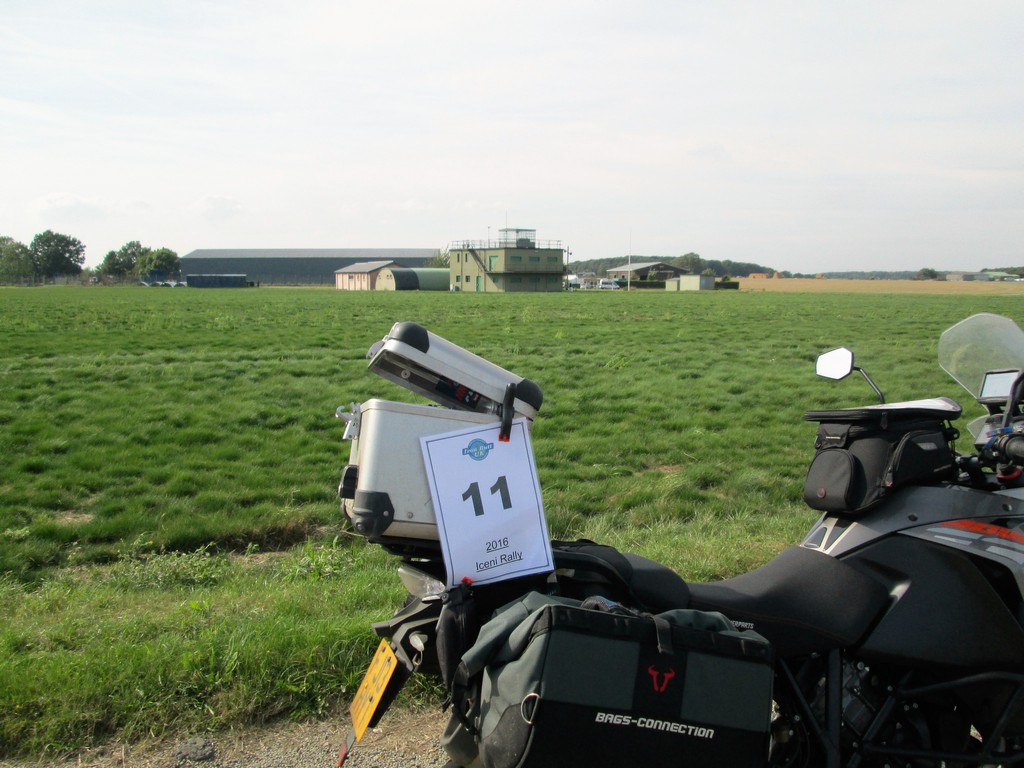 Not to be too disappointed, my next port of call was the Aldeburgh Yacht Club, this was right on the seafront and reached by a gravel road, the wind was blowing a gale which made the placing of the rally flag extremely difficult. Again I met up with a fellow rallier so I offered my clamps so we could firmly anchor our flags to an adjacent board to get it in the shot without it disappearing into the North Sea. The seafront was crowded which was a surprise considering the difficulty in breathing in the sea air! Being a bit of a fan of the seaside I would have liked to linger and get in a couple of scenic shots but the matter in hand was calling, a delicate trip back over the gravel started the next leg to Southwold and specifically Adnams Brewery. This was a bit of a criminal stop, a visit to a brewery and no drink, what was the world coming to? 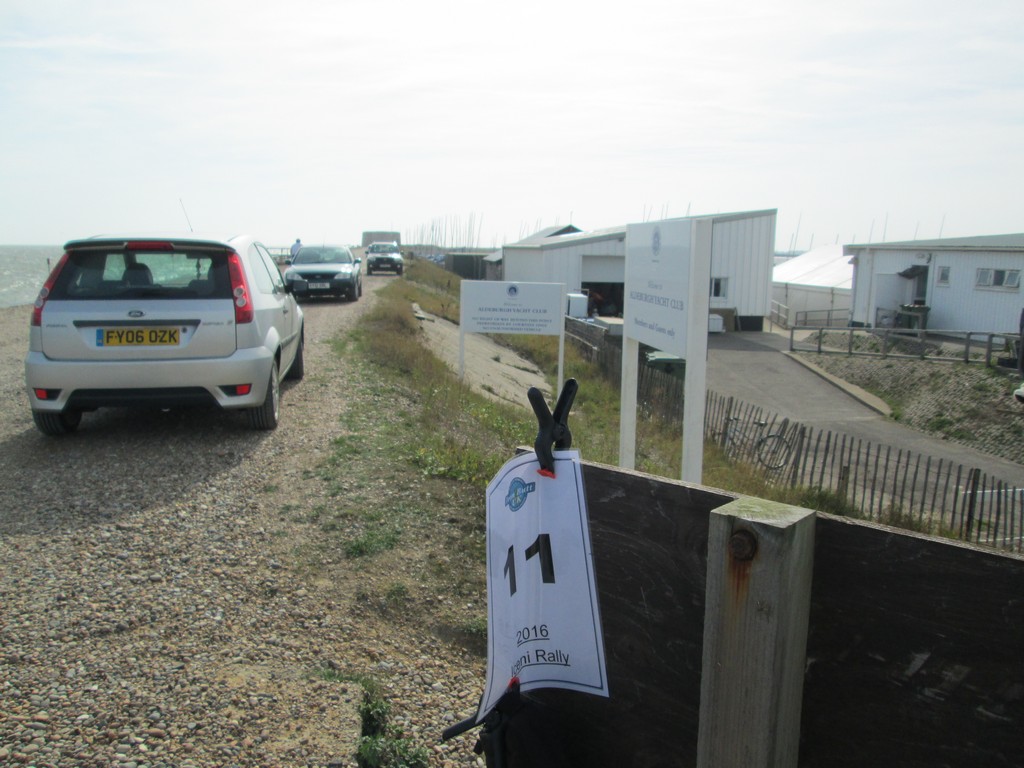 The brewery stop was another where I ran into a fellow entrant, we were to visit the remaining photo stops together-ish, it seems there is more than one road around the Iceni region and none really quicker than the other!

Southwold was the farthest point on my ride plan so the return leg started, there followed more village stops, first one in Pulham St Mary, another Airship reference, the village sign was the target, this was followed by a stop in the market town of Eye and a photo of the memorial in the centre of the town. 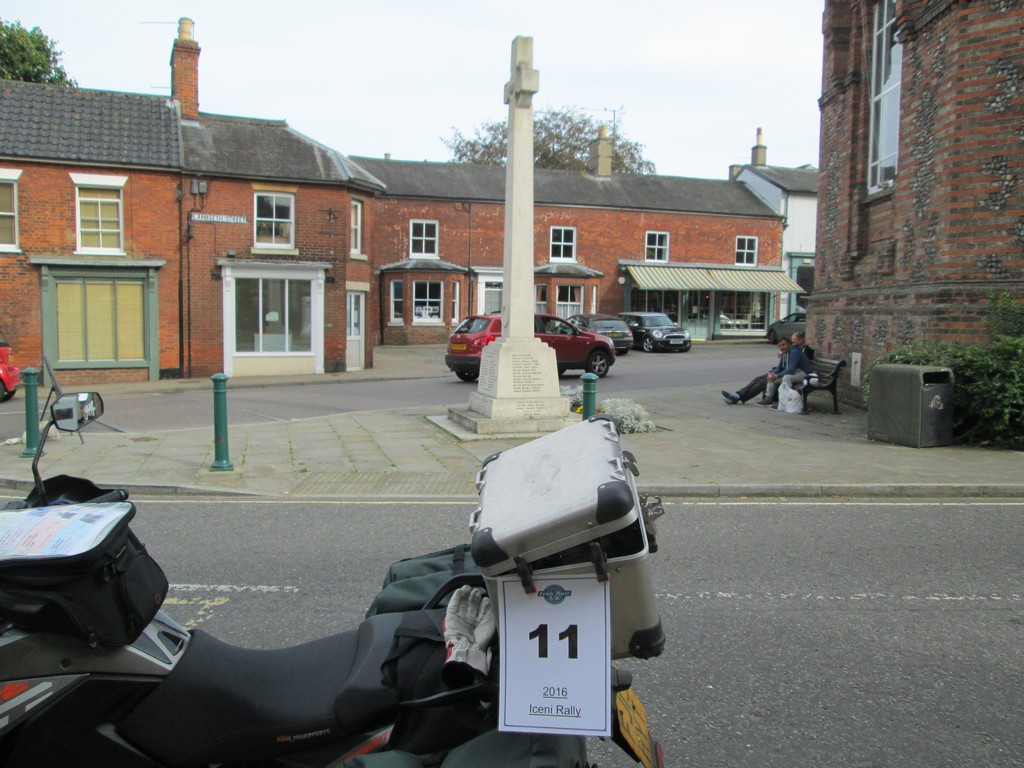 There were only two stops left now and the time was looking good so I could afford to relax a bit knowing there were minutes in hand. The final aviation themed stop was next specifically Rougham control Tower Museum, this was located in the middle of an industrial estate which has been built on the airfield, you can still make out the runways in the Google Earth view as is the case with many of the old WWII airfields in the country, amazing really.

Last up was a ride through the racing town of Newmarket, this was a first for me and my route took me alongside the famous racecourse, given the time factor I was able to take it nice a steady and have a look around a bit. A stop off at Black Bear motorcycles completed my picture taking duties for the day so I decided to take the opportunity of filling up with fuel for the homeward trip which would save time later on when it was dark. 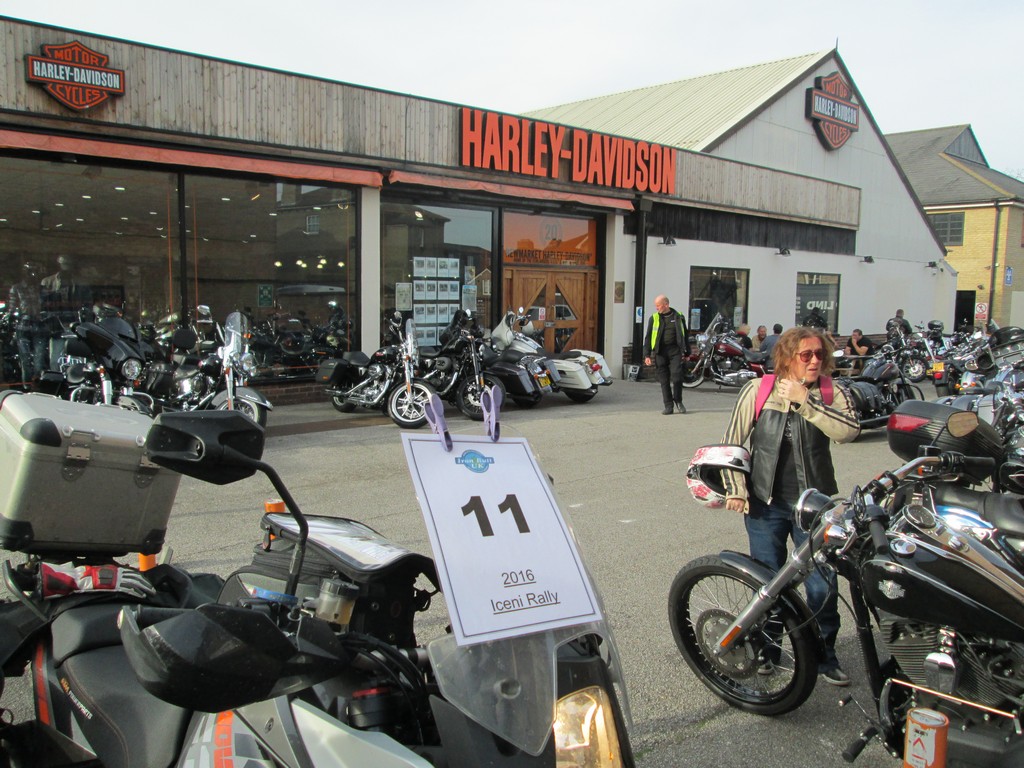 Back at Rally HQ my arrival time and finishing mileage were recorded and I was handed my claim form to complete, once this was done I checked in with my camera in hand to prove the stops claimed and also to confirm that I had complied with the full instructions. It is easy to forget to get your bike or yourself in the photo which renders your efforts null and void. 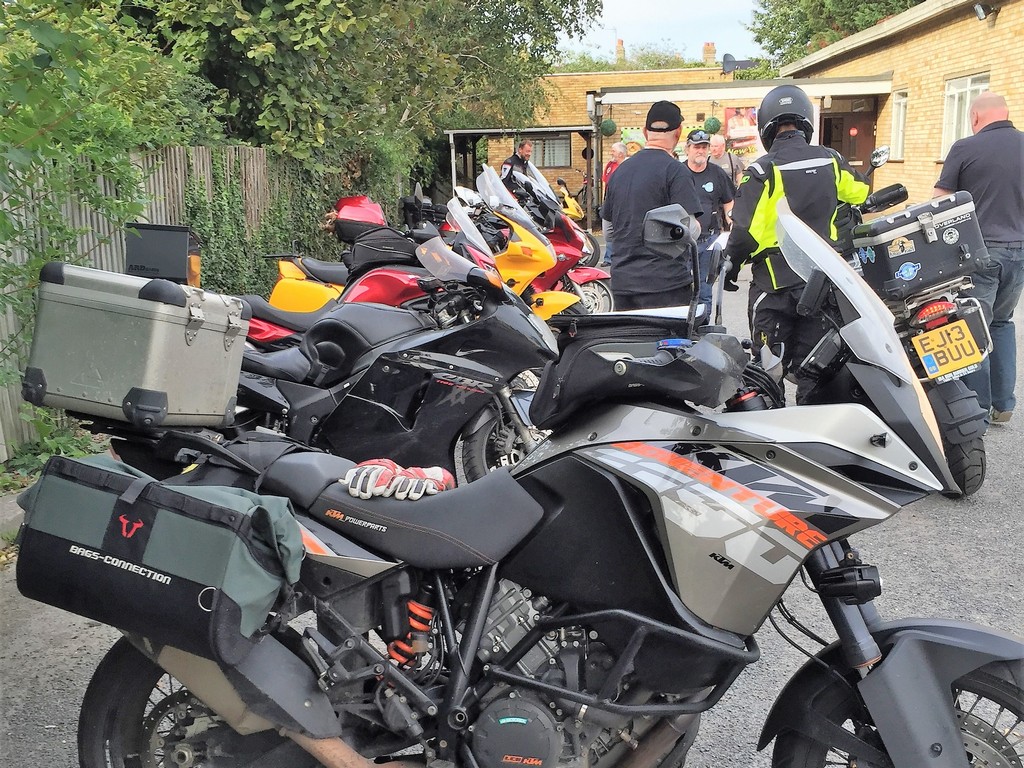 After all the entrants had arrived back and gone through the scoring process it was time for the presentation ceremony, I think that everyone who had attended the rally last year had improved on their scores and the newcomers also scored very well, the overall result was down to three experienced rally men which were no surprise with this year’s winner being the same as last year so no doubt he will be back over from Germany again next September for what is to be the final Iceni Rally before it hopefully moves on to a different region. 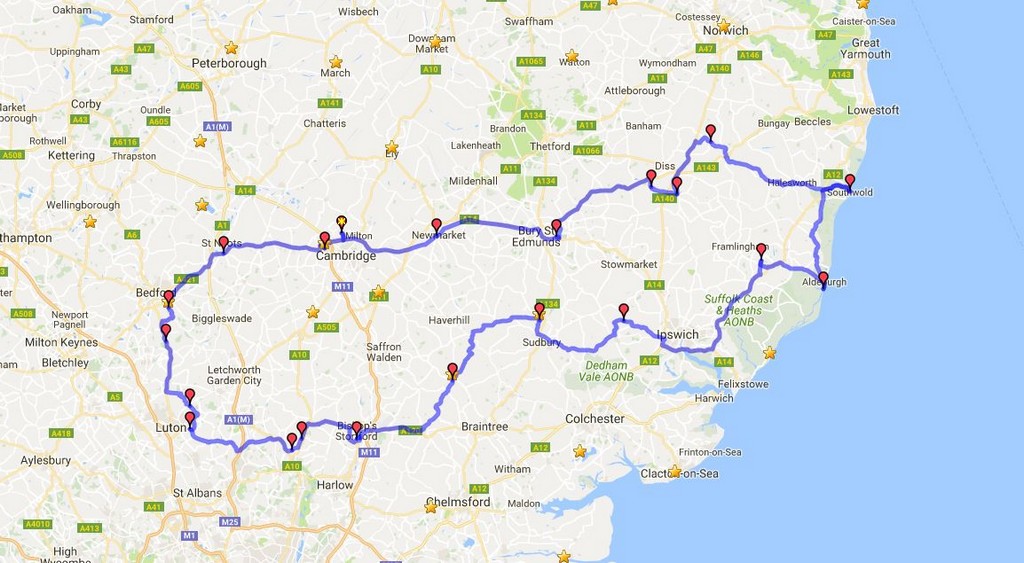 I achieved two out of three aims on this event, first to score more points than last year, second to finish in the time allowed so as to avoid the 50 point per minute penalty and lastly to finish higher than my placing of 7th last year, this I didn’t manage but 9th is good enough for me. 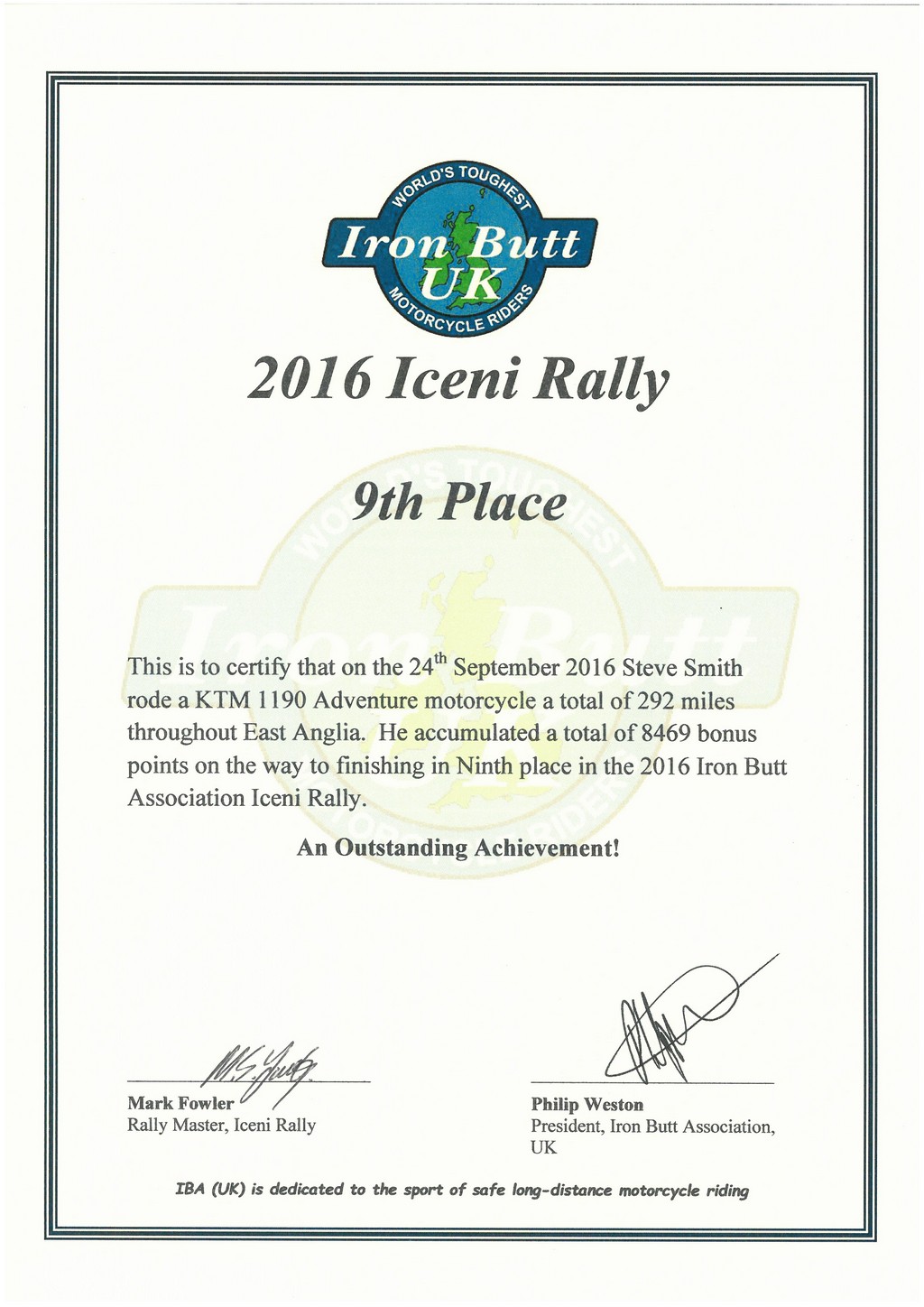 A big thank you to Mark and his Iron Butt helpers for organising the day, very good format and different from finding answers to clues as with other rallies.