End of January already, where is the year going?, Billy found himself with a free Saturday so it was all go, the weather was forecast to be on the cool side of cold but a good chance of a dry day, somewhat rare at the moment and given that storm Henry was on the way.

Billy’s ride plan was to visit five castles located in Shropshire, Powys, Herefordshire and Monmouthshire. The plan had been sitting about for a couple of weeks and it was to be the subject of Billy’s mental note #1, “refresh the memory of one’s ride plan before setting off and not rely on your scribbled notes…”

First stop required was for fuel, the BP Garage at Oversley Green seemed to fit the bill nicely and after the initial journey getting used to what was absolutely shite road conditions a tankful of unleaded was purchased, this in itself was not without incident, on leaving the shop Billy had a tap on his shoulder and a guy stood there with Billy’s keys… Doh…. He had left the bloody things on the counter, dope.

Back on track and off down the A422 towards Worcester to pick up the A44 to Leominster. It was on this section the Mental Note #2 came into play. “Check the dam tyre pressures before setting off”, this was a job usually carried out but not today. The warning flashed up on the dashboard “low front tyre pressure”, Bollox. A quick stop verified that it was not a puncture so Billy ploughed on to the OK Diner Island and the adjacent BP garage, another problem, the air hose connection was no bloody good for a motorcycle tyre with spoked wheels! Bollox! There was nothing Billy could do except curse the loss of a quid to pump compressed air into the atmosphere. Mental note #3 “Check suitability of machine before bunging in the dosh”

Billy set off again following the A49 and cursing the loss of time and the fact that a few miles were going to be covered with trepidation before the next stop and a further check of the tyre to make sure it wasn’t getting any worse.

Eventually, Billy made it into Clun and the first photo stop of the day, it seemed like hours since setting off from home which it was, two hours had passed and only on the first stop, could be a long day in prospect, and still the next ones were a bit closer together so it wouldn’t be so drawn out. 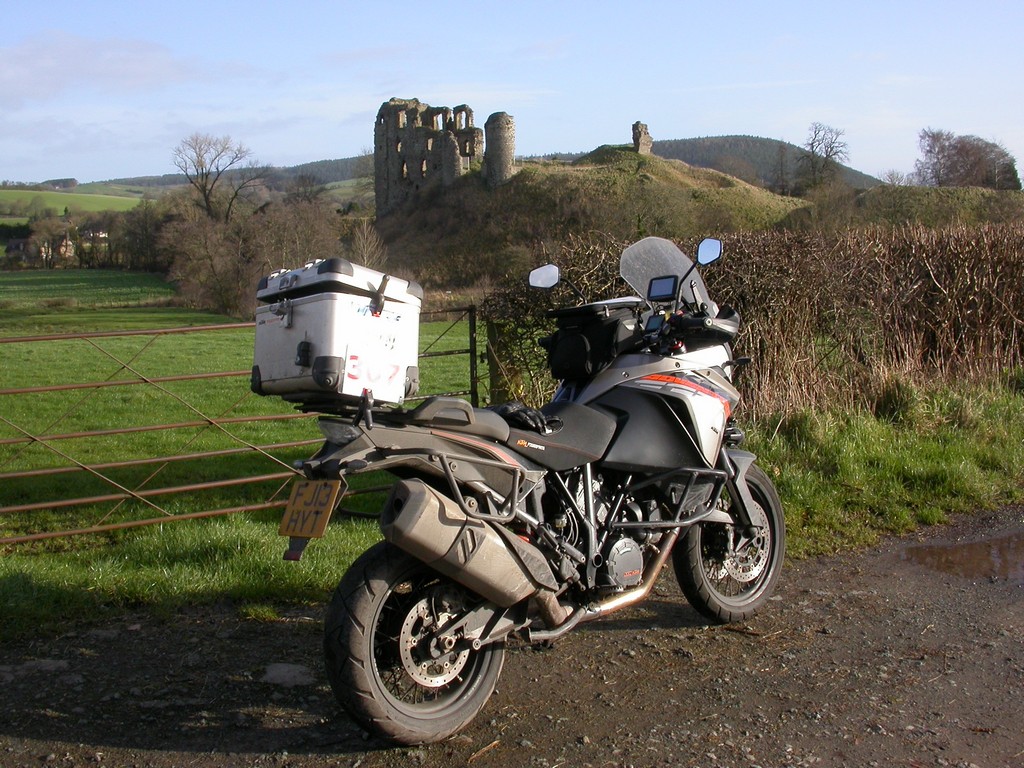 After Clun it was into Wales and Bronllys Castle, this was forty miles away so a fair distance to cover, all went well and it was still dry, bonus. Bronllys Castle was actually closed for repairs, the scaffolding contained a few blokes milling about in Hi-Vis gear but this was not a problem. Alongside Billy in the layby was a crew bus and the driver got out when he saw Billy talking photos and offered to open up so he could get a shot of the information board. Billy took the guy up on his offer as it seemed rude not to, a most generous gesture I thought. 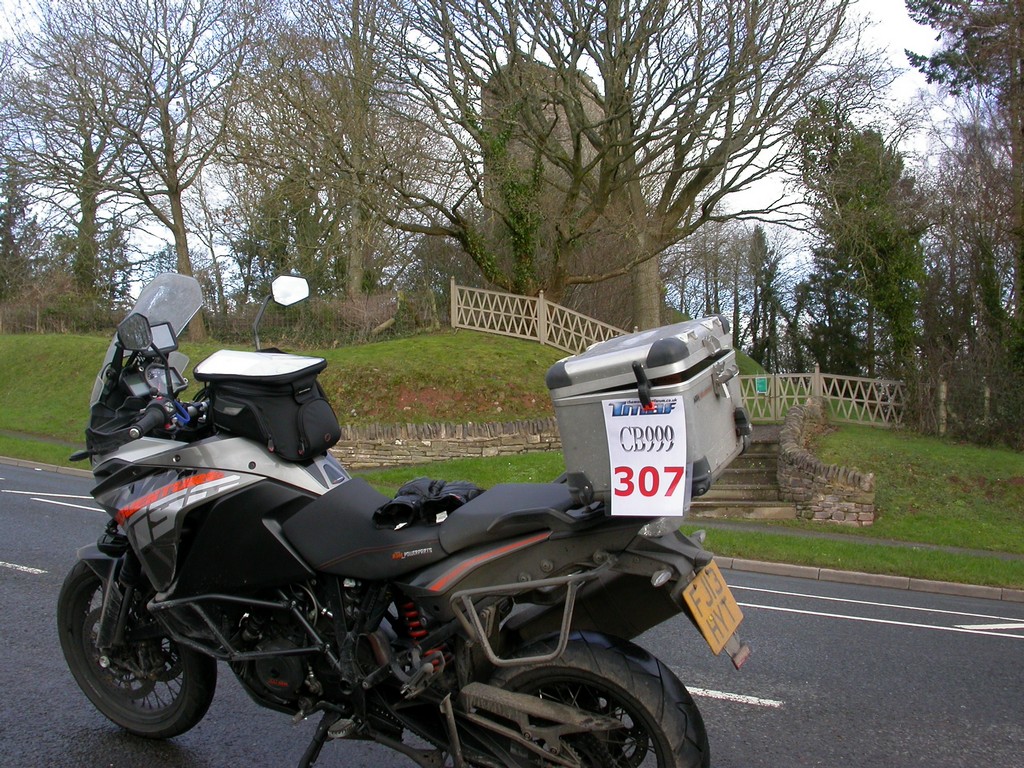 Next up was Longtown Castle, now Billy had travelled this route in early December last year and had fallen foul of the Black Mountains, what should have been a shortish trip turned into a nightmare run through the goat tracks of the foothills, Billy had done his research this time and had sought a different route. Time for Mental note #4… “get your act together you pillock and do some proper research into possible route problems.” It turned out that a tussle with the foothills was once again on the cards and whilst nowhere near as bad as before it did present a few problems. Bollox. Bloody mud and water everywhere, single track roads, pain in the butt and worst of all bloody slow going, still at least there was no confrontation with sheep and dogs this time. 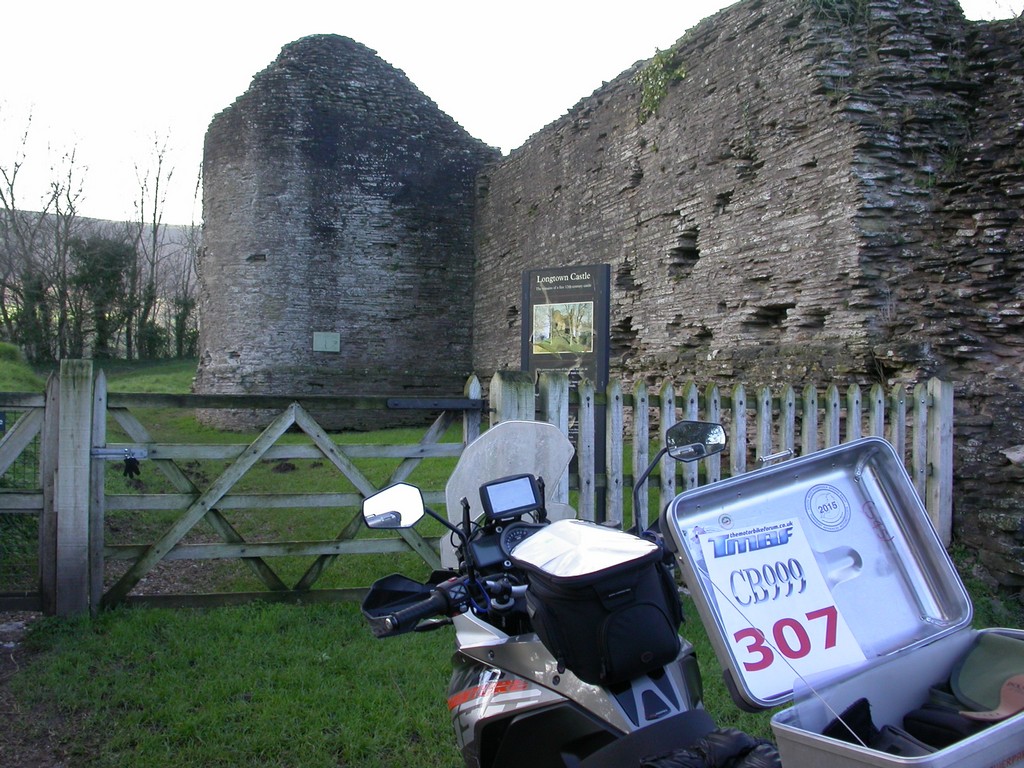 Longtown eventually came into view, what a cracking spot, there is a row of cottages just in front of the castle ruins, not many people can say they have a castle in their back garden!, Brilliant.

The road heading south out of Longtown was much better than the tracks in from the north, this is the route to pick. Cruising along the valley roads Billy had a fantastic view along the valley, that is to say it would have been except for the bloody great storm which was making its way along the valley cut-out, Billy could see the rain and sleet from miles away, this prompted a review of timings and a bit more gas was forthcoming, according to the Sat Nav a turn to the right was coming up soon, this looked to be the best way out of the storm’s path.

A few minutes later the first downpour of sleet and rain arrived, however the right turn did have the desired effect and Billy was able to outrun the worst of it after a mile or so, perfect and Skenfrith wasn’t too far away either, double result. 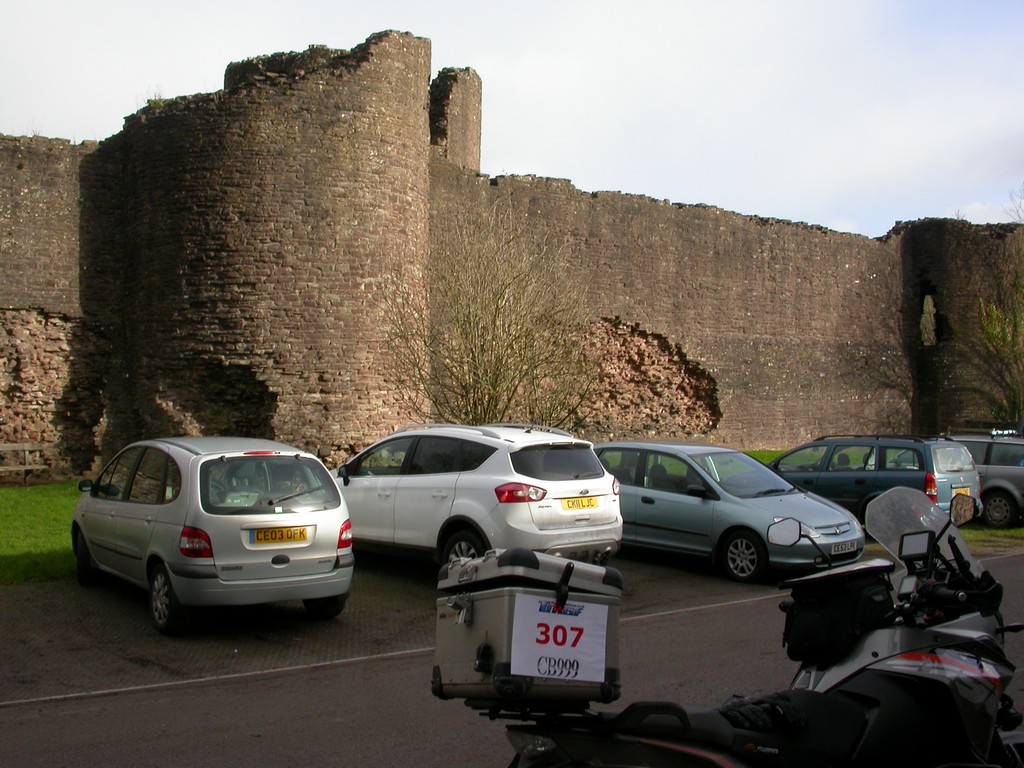 The lane outside Skenfrith castle was busy with walkers etc. parking was at a premium so a quick photo stop was all that was on offer. The digital record duly collected it was off to the last stop of the day, back into Herefordshire and the small village of Goodrich.

Goodrich Castle turned out to be an anti-climax. This castle is run by English Heritage and they look to be milking it for all it is worth. Added to the fact that the storm had caught up with Billy and was depositing gallons of water all around, the car park only had a visitors centre on view. Billy couldn’t be arsed hunting about for a castle view so a couple of quick snaps of a signpost and the hidden visitors centre would have to do. Not only do English Heritage charge for entry to the monument, which is fair enough, they also charge to park your car! It may be Billy but this did seem a bit excessive. 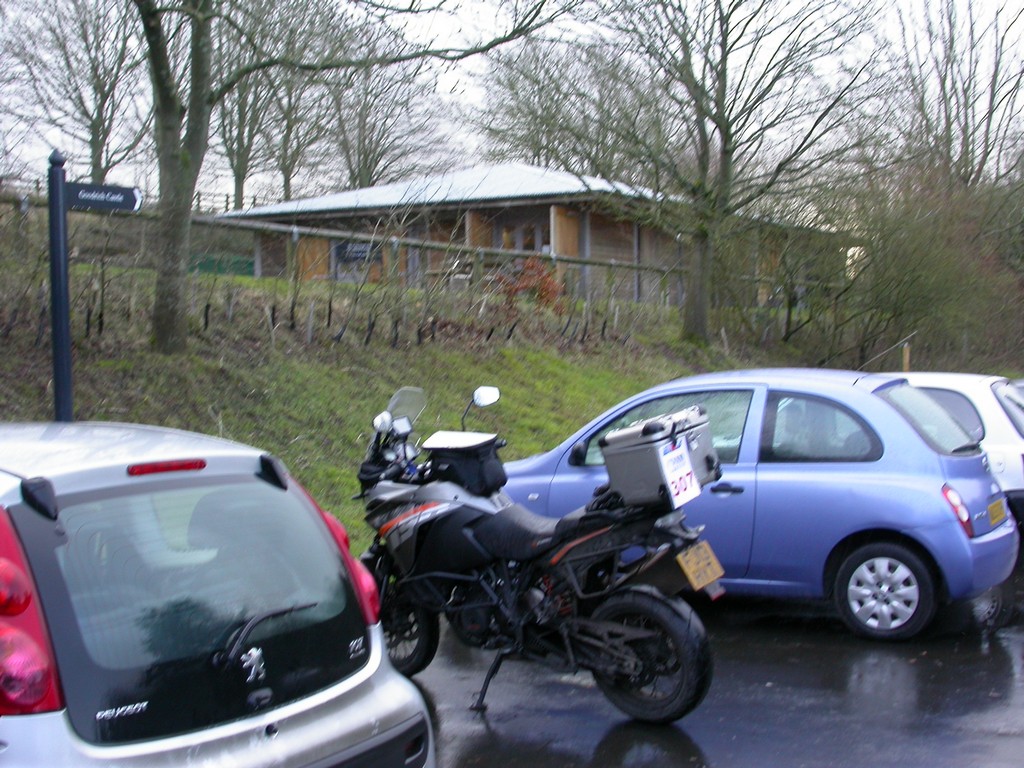 Once home Billy checked the front tyre pressure, sure enough the system had done its duty in flashing the warning, the pressure was down to 26 psi, a quick top up from the compressor restored it to Billy preferred 35 psi and the prospect of checking after a few days loomed to make sure there was no expensive puncture present. 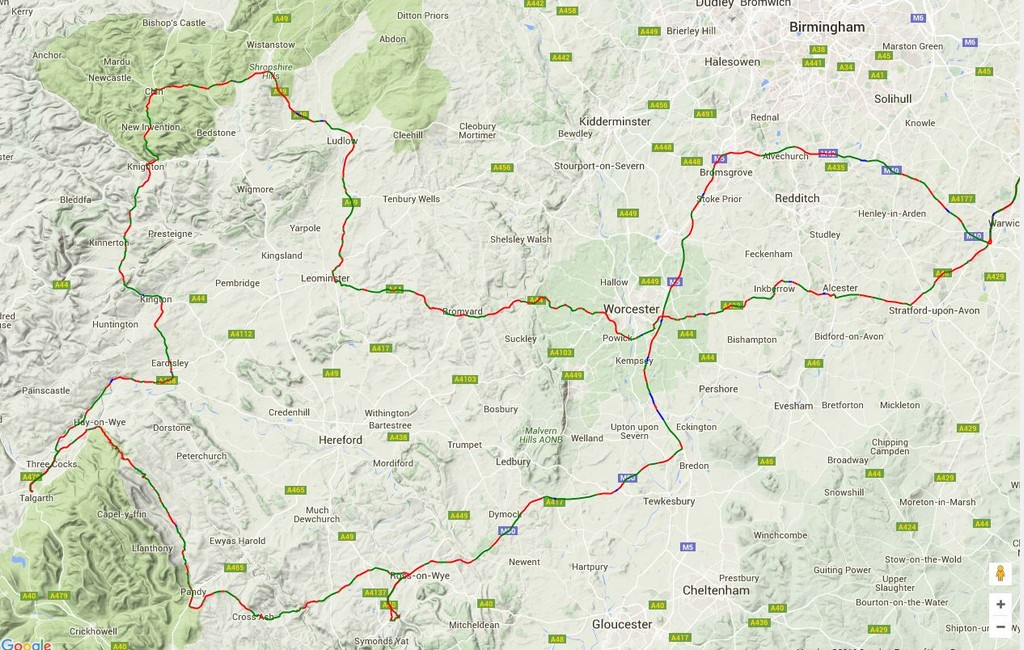 Two hundred and ninety miles, temperatures ranging from 3 to 6 degrees, rain, sleet, wind, sun, absolutely shite roads, what is there not to love about being a motorcyclist in Britain?