Second attempt at this rally, and, being the easiest of the year from a riding point of view, is a fine way of spending a Saturday riding some decent roads on your chosen route without the problem of possible detours up goat tracks in the middle of Wales or Devon.

My planning time was severely limited this year due to computer problems so when the paperwork was delivered by Royal Mail I did try and form a totally different ride from last year. However, it was not to be as I couldn’t quite make the matrix mileage add up for where I fancied going. Falling back to plan ‘A’ I dug out last year’s trip and made a few adjustments to add an extra point of call, threw in a couple of TMBF Photo stops and formulated a fairly decent ride.

With a checkpoint within 5 miles of home I decided to start at Dunchurch and left home at 11:30 in order to get there in plenty of time for the 12:00 start. There were three bikes in the layby, along with a few Polish Lorries which looked as though they were parked up for the weekend. After a chat with the marshal a few more bikes arrived and close to 12 we all checked in and got ready for the commencement smack on the dot. 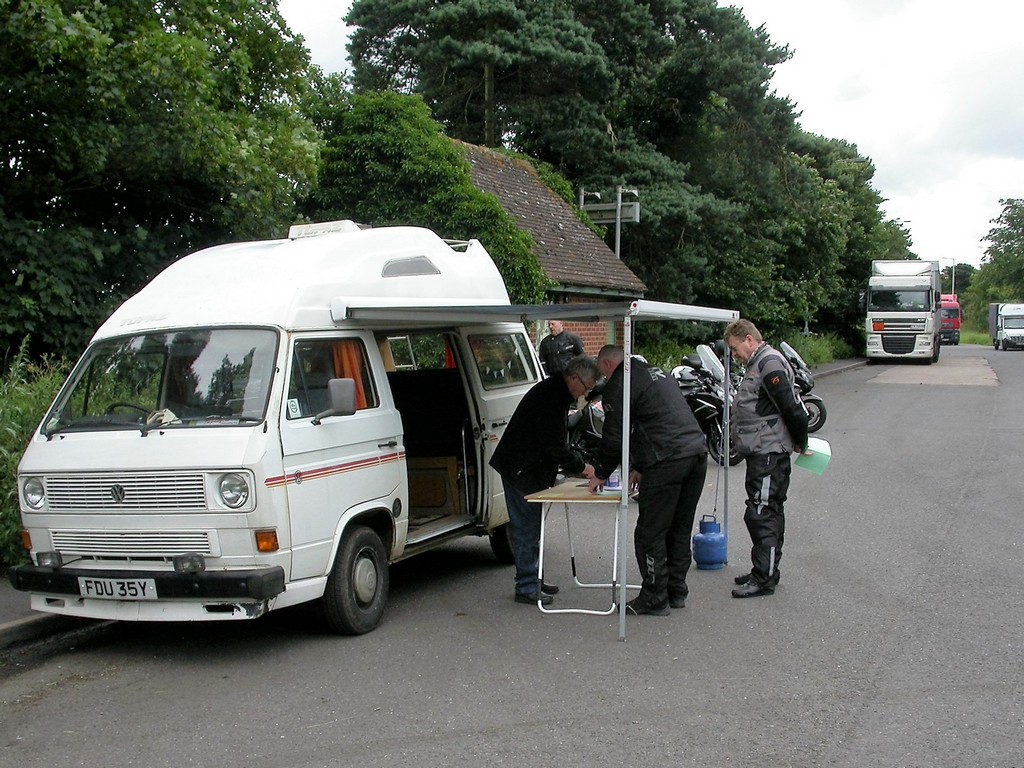 First stop for me was in Kettering, I wanted to call here to view the fine collection of vintage machines at the AJS & Matchless Owners Club and I was not disappointed, there are plenty of things to spend your hard earned on if you are into that sort of thing. 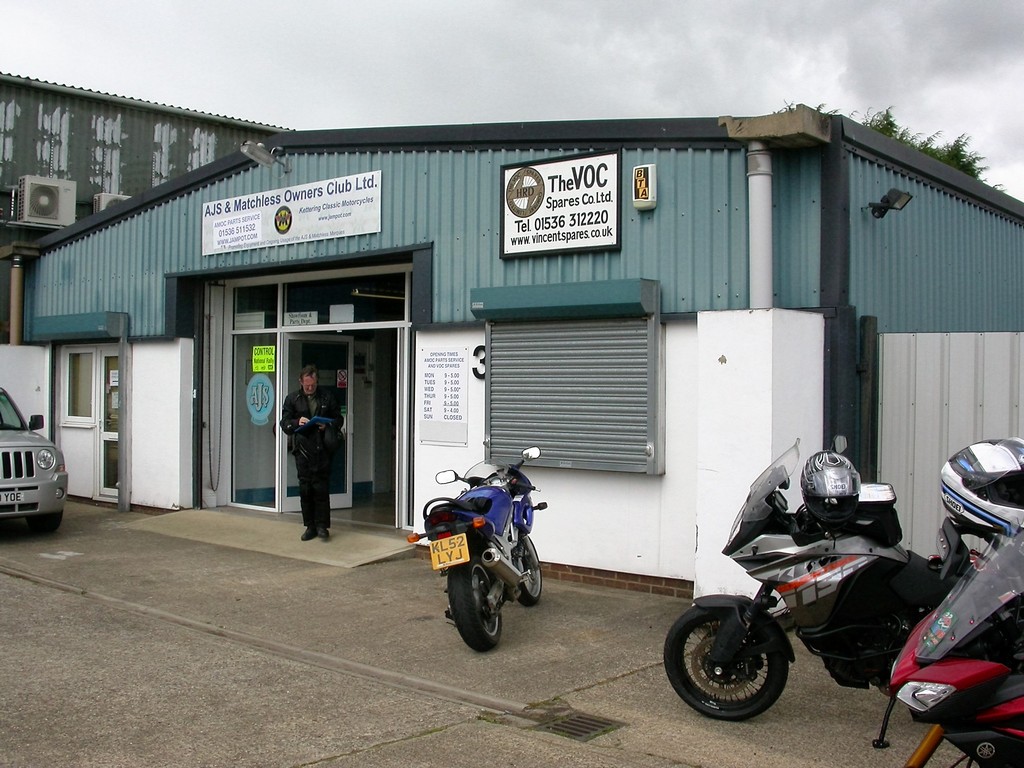 After Kettering it was off to Stibbington on the Great North Road, close to Peterborough. From here it was off to Gildo’s Motorcycle Centre in Wisbech, this place was absolutely rammed with bikes last year and parking was tight, not that different this time round but the indifferent weather meant that there were spaces in the car park but I decided to pull up in the layby on the main road. I didn’t stop too long at this one but looking at the feedback this was perhaps a hasty decision if I venture this way next year I will factor in some time to take advantage of their hospitality. 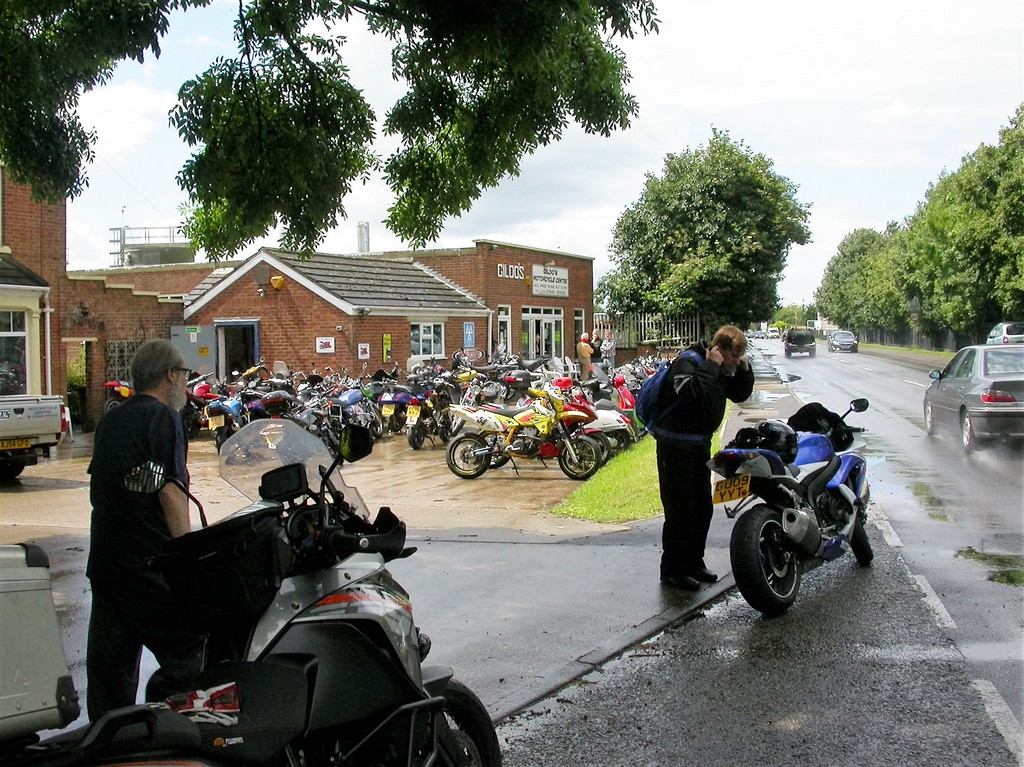 From Wisbech my next stop involved a detour from the rally route to Castle Rising near Kings Lynn for a TMBF tag, by the time I arrived I was caught in a hailstorm, luckily the car park surface has been improved since the last time I was here and the side stand didn’t sink into the clay surfacing. 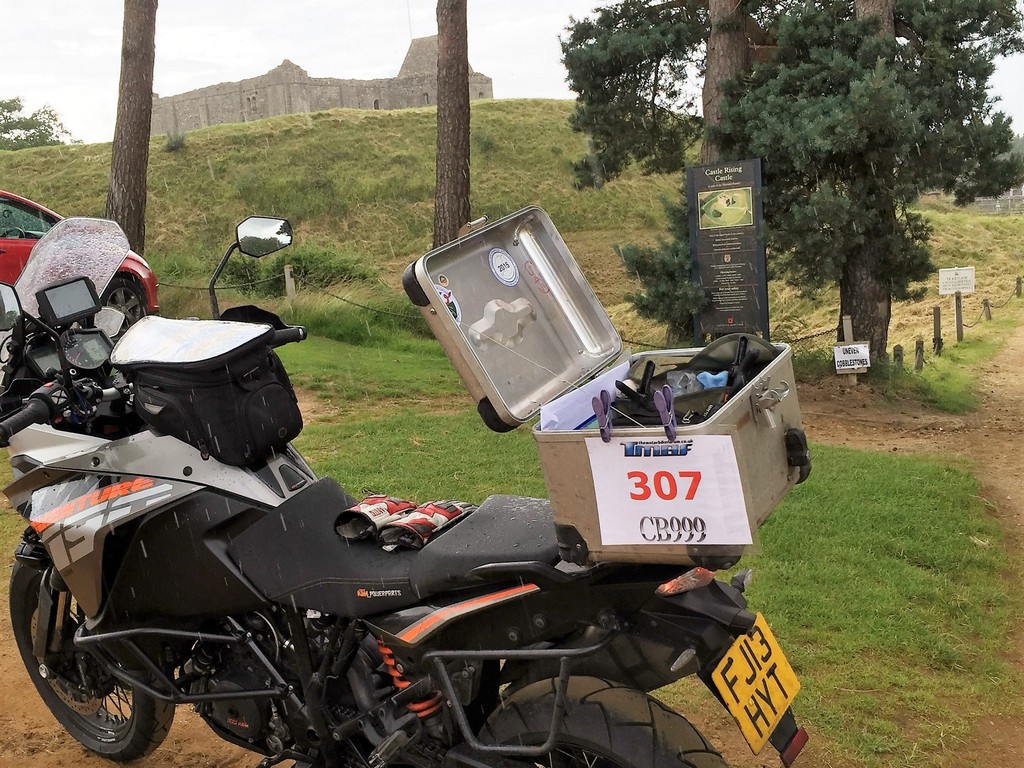 Being in this part of the country gave a good view of the many storms that were parading around looking for places to dump their cargo, the level landscape allows some dramatic scenes to unfold as you ride around hoping that the Sat Nav will be directing you away from the worst of it.

Next up was my lunch stop, Langrick Station Cafe, nothing exciting just time for a bacon batch and a bottle of water with a banana to finish up with. There are plenty of drinks and nibbles available at all the stops so there is never an excuse to go hungry but there is something about fried food that cannot be ignored. 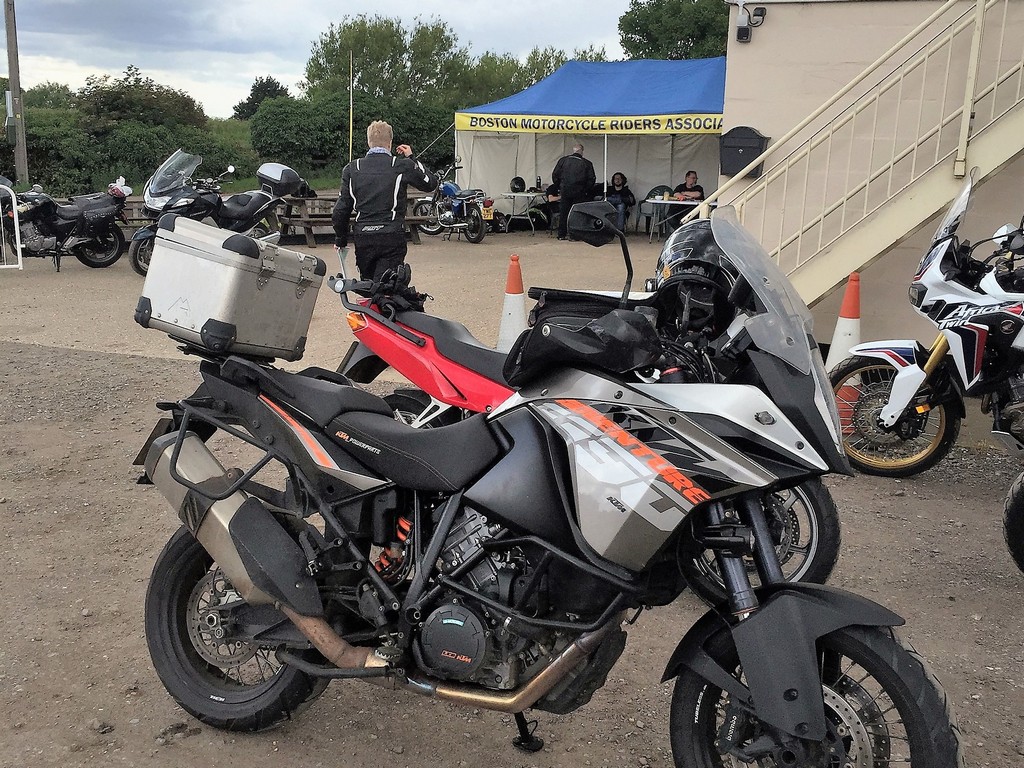 Horncastle was next on the list and specifically West Ashby Village Hall. I was in such a relaxed state by this time that I went completely past the checkpoint, turned right and carried on, it was only a mile or so down the road I realised that I had gone past and had to double back! with a case of Déjà vu I set off back down where I had been and come back from towards Lincoln, this proved to be another slight problem as I entered the road given in the checkpoint details from the wrong end, after a couple of trips up and down I realised the road carried on around to the left where Wrightway Motorcycles was to be found. 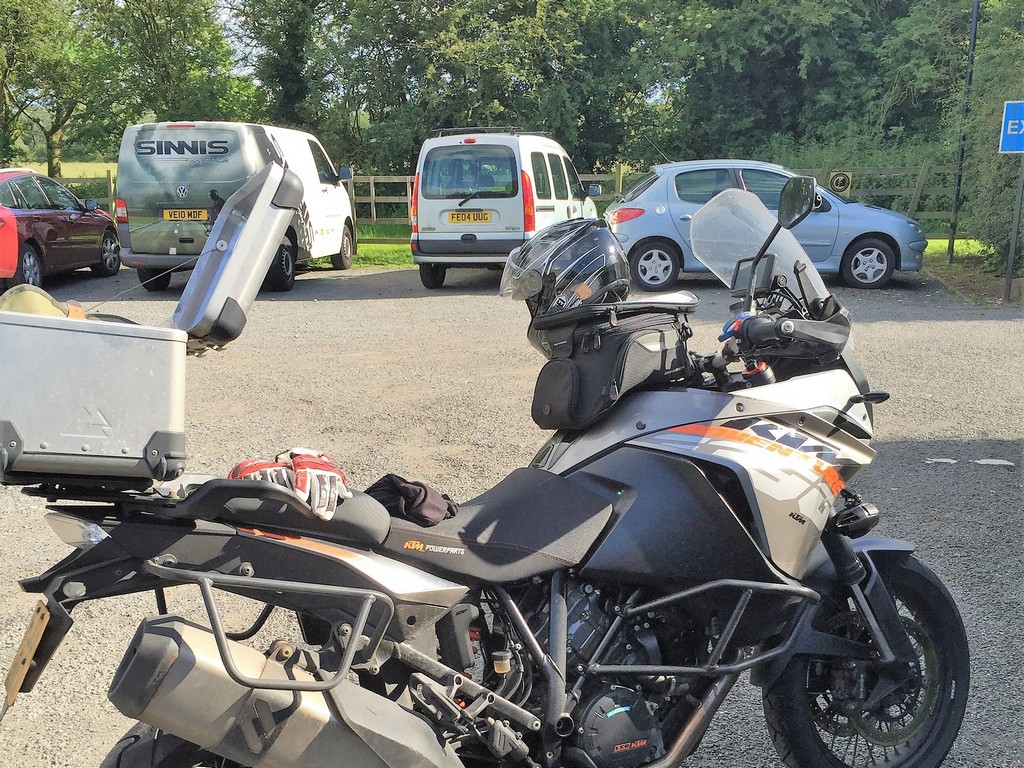 From Lincoln it was a simple task of following the A46 towards Leicester, a quick stop off en route in Newark for my second TMBF tag of the day it was onward towards the Syston checkpoint situated in the Gate Hangs Well pub car park on the Fosseway. The car park was well populated when I arrived and whilst on site, the cars just kept coming so parking was at a premium, turned out there was an evening wedding do on which explained it all. 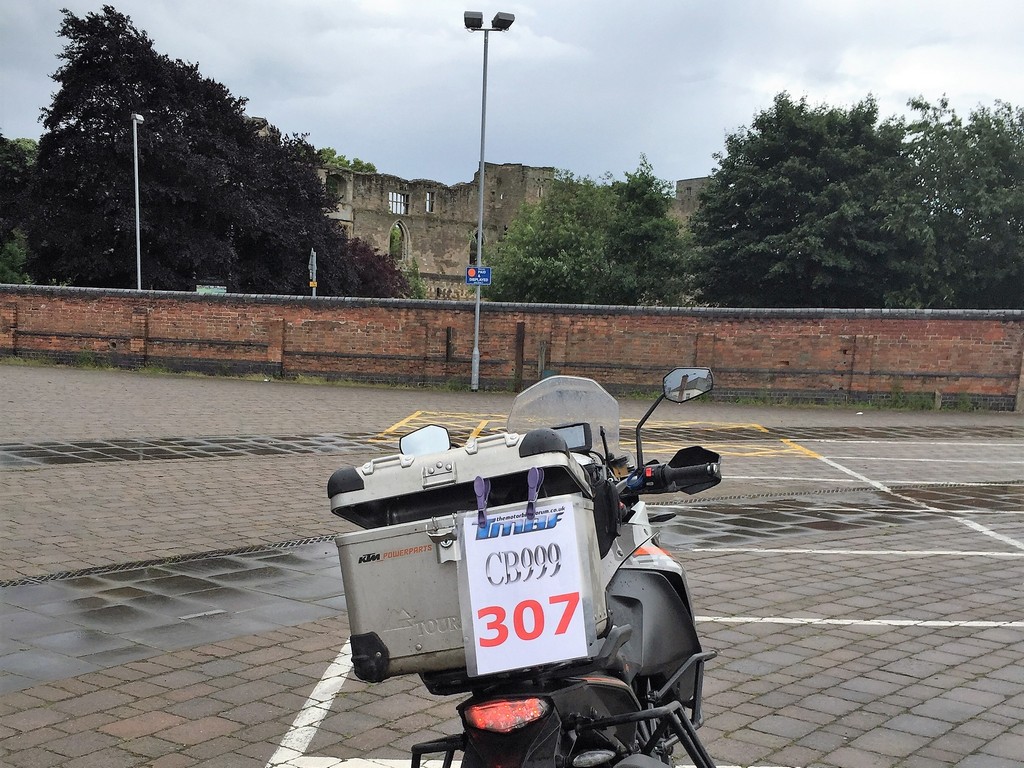 After Syston it was up to Kegworth and the services at Junction 23a on the M1, I had intended to refuel at this point but with the eye-watering petrol prices on offer I decided to leave it and call into a garage on the way to Burton on Trent.

The Burton checkpoint is one of my favourites, it is in the Unwanted Motorcycle Club’s clubhouse, this place looks like a throwback to the motorcycle clubs of old, absolutely brilliant, I could well imagine spending plenty of time in here drinking the local brew from over the road and listening to overly loud heavy metal ‘tunes’. 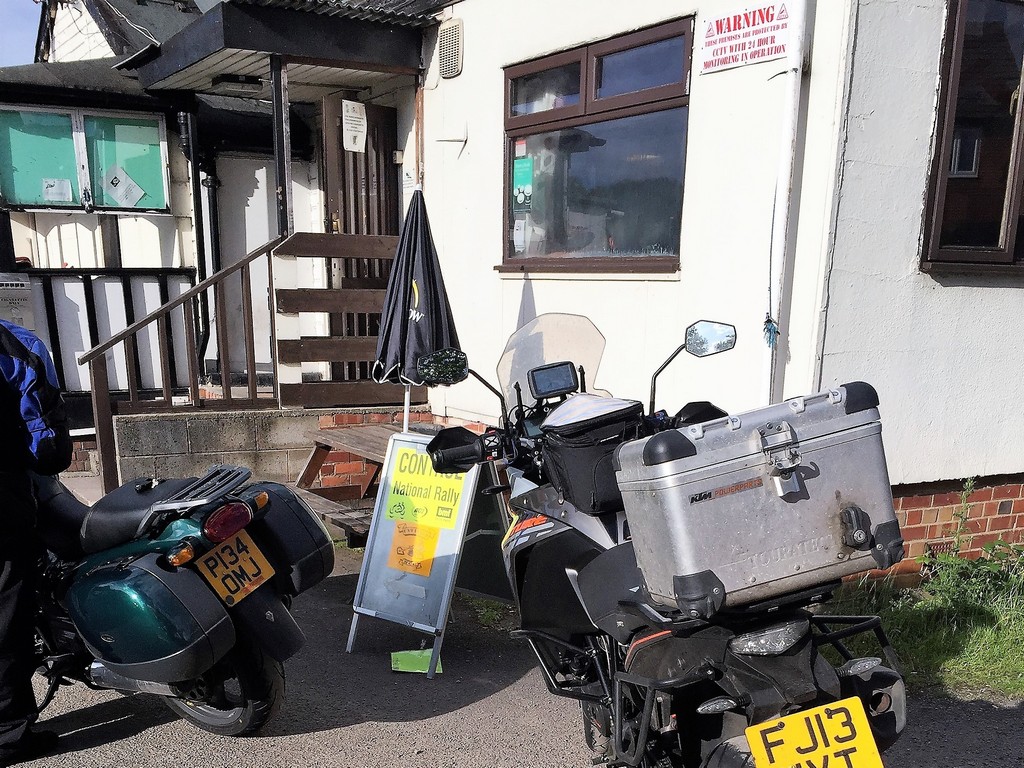 Last point on the horizon, there just remained a 36-mile hike to Barker Butts Rugby club in Meriden. I arrived at 19:30 which I didn’t think was too bad, it took half an hour longer than last year but I did add in a couple of extra stops for photos so I was happy. After getting my card marked and signed, I took advantage of a few bourbon biscuits that were on offer and set off for home.

The whole day covered 345 miles and I was back in time for the Germany v Italy kickoff. 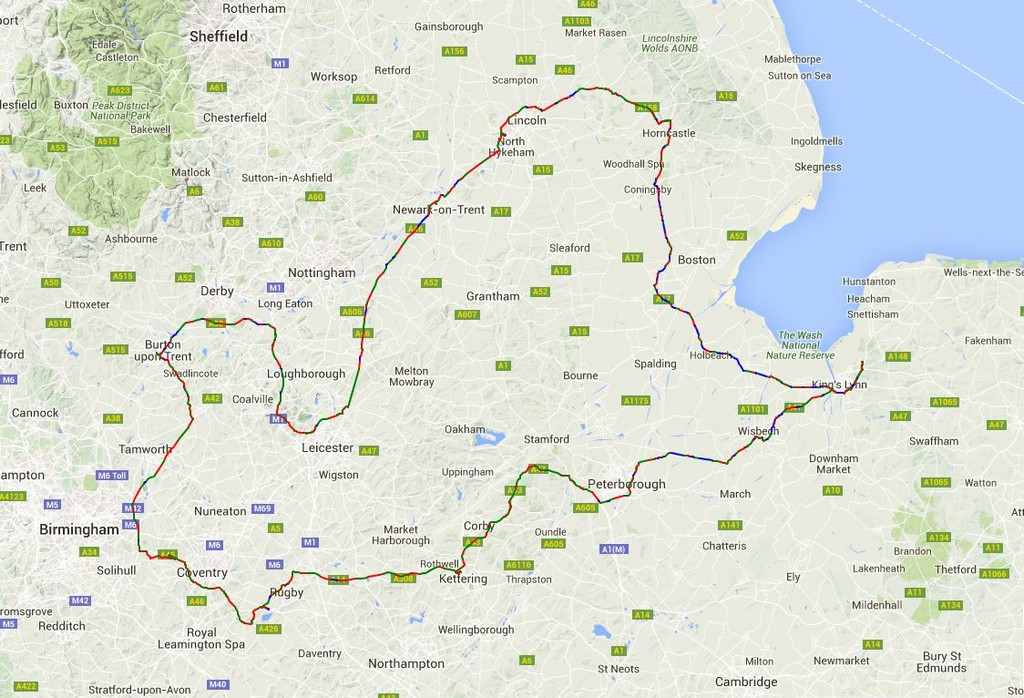